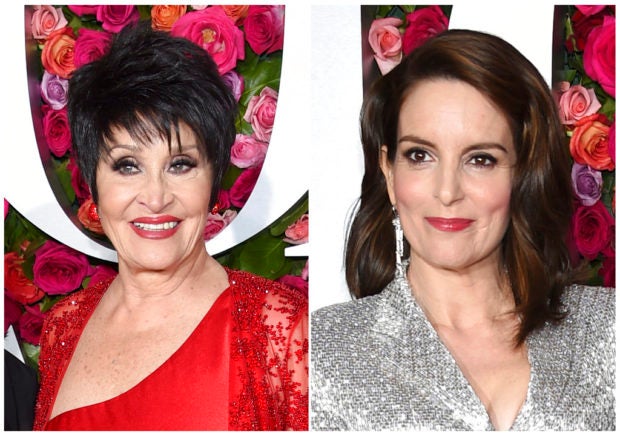 This combination photo shows Chita Rivera, left, and Tina Fey at the 72nd annual Tony Awards in New York on June 10, 2018. Fey is joining Rivera and other of Broadway’s biggest stars for a concert being livestreamed Saturday, June 30, to benefit migrants on the Mexican border. Images: Evan Agostini/Invision/AP

NEW YORK — Tina Fey is joining some of Broadway’s biggest stars — including Audra McDonald, Idina Menzel and Chita Rivera — for a concert being livestreamed Saturday to benefit migrants on the Mexican border.

It’s being organized by Seth Rudetsky and James Wesley, who were prompted to act after seeing photos of children separated from their families. They began texting as many stars as they could think of.

“Seeing the images, we were really depressed,” Wesley said Friday. “It was so overwhelming. What do you do? All we can do is put on a show and hopefully educate people.”

The concert is set for 5 p.m. EDT at The Cooper Union in downtown New York City. It will be broadcast via Facebook Live and at ConcertsforAmerica.com .

Highlights will include Rivera singing “America” from “West Side Story” and the reuniting of McDonald and Mitchell for “Wheels of a Dream” from the musical “Ragtime.” Settle is flying into New York specifically to perform “This Is Me” from the film “The Greatest Showman.”

The late-afternoon timing of the concert will allow current Broadway stars like Rannells, Bomer and Gonzalez to attend the concert between their two Saturday shows. Immigrant-rights rallies across the country are also expected on Saturday.

The concert is the latest in a series of benefit shows created and hosted by Rudetsky and Wesley, the host and producer of Sirius XM’s “On Broadway” show who also organized the Broadway for Orlando group’s recording of “What the World Needs Now Is Love”.

Both men said Saturday’s show will include a mix of songs and comedy, as well as solidarity. “We always like our concerts to be optimistic and fill people with hope as well as give them a call for action,” said Wesley.

The concert comes in response to the government’s push to prosecute all migrants caught entering the country without authorization. President Donald Trump has halted his policy of taking children from their detained parents under public pressure but around 2,000 of them are still being held, with many families saying they’ve not known how to locate them.

Proceeds from the concert will benefit four non-profits that aim to protect the civil and human rights of families: Al Otro Lado, Texas Civil Rights Project, ACLU Foundation of Texas, and Florence Project. Representatives from the groups will offer their perspectives from working on the front lines. MKH

Immigrant mom sues Trump admin to get her son back

Brazilian boy, 9, reunites with mom after US judge’s order