Who’s the ‘mama’ in Jun and Perci’s family 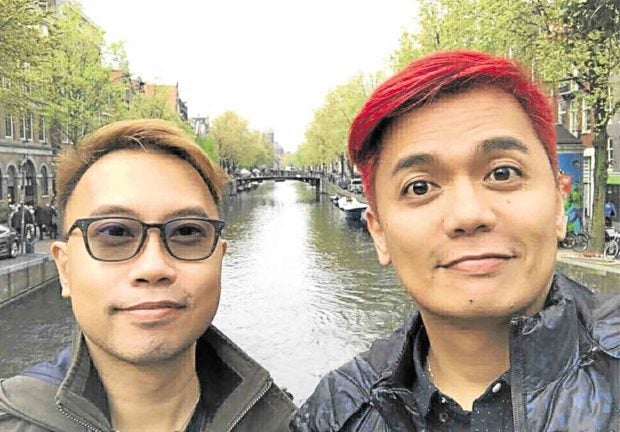 In a household run by a homosexual couple, who gets to play the role of the dad? How does one explain this unique setup to the kids?

These were among the questions that award-winning indie filmmakers Jun Robles Lana and Perci Intalan attempted to answer for this Inquirer story that pays tribute to the LGBTQ community this June, which happens to be Pride Month.

The couple, who got married in New York City in 2013, now has a 2-year-old son. They are also in the process of adopting their second.

“We’re lucky because Jun’s mama lives with us. She is also our son’s mama. In a way, we’re a family because there’s a ‘mama,’ there’s a ‘daddy,’ and then there’s me, the ‘papa.’ Nobody will tell our son that ours isn’t a complete family,” Perci told the Inquirer.

Perci added that there’s really no difference between a “papa” and a “daddy.” He explained: “You fill in the blanks. You just do what is needed to be done at home at the time.”

“The daddy spoils the kid,” declared Jun. “Yes, he hands out chocolates even if it’s already 11 at night,” Perci added.

“We just want to raise kids who are empathic, which I think is more important,” Jun pointed out. “Of course, at the back of my mind, I always think of the perfect time to explain the setup to our son, and how he’d react to it.”

For Perci, making a child understand is “a long process… You will have to talk with him about it several times. It’s easy when he’s at home, but confusion begins when he is already in school. I think the child just needs to be grounded all the time. It’s important that he feels loved by his family, because as long as he feels secure, no outside factors will be able to shake this.”

Perci said they apply the same principle to their other “baby,” their production company called The IdeaFirst. “We do not dream of becoming an empire. What we want is for our group to be composed of members who share the same vision,” he pointed out.

“I see us more as a boutique production company,” Jun stressed. “We specialize in the kind of storytelling not offered by others. Also, I’d like to be able to work with young directors who are passionate about what they do and have specific stories to tell, not necessarily those who follow the bandwagon.”

To be accepted in their team, Jun said one has to have “real talent… I’m not even talking about someone who is good at technical stuff. I believe that talent is something that you’re born with. You can’t fake it. It’s important for us that you’re very passionate to tell your story. You can learn the technical aspect while working on the set.”

The second requisite would be a “strong personality,” said Perci. “He should have stamina. We don’t want a quitter. We also don’t want someone who is so full of himself. He should be able to work well with the team. Having a strong personality doesn’t mean being conceited. Some of them are just assertive, and we need them. We want people who are not selfish, people willing to help their colleagues.”

Jun is working on his latest romantic comedy “Ang Babaeng Allergic sa Wifi,” starring Sue Ramirez; while Perci is currently busy with post-production work on his drama “Distance,” which features Iza Calzado. It is an entry in the 2018 Cinemalaya Philippine Independent Film Festival in August.