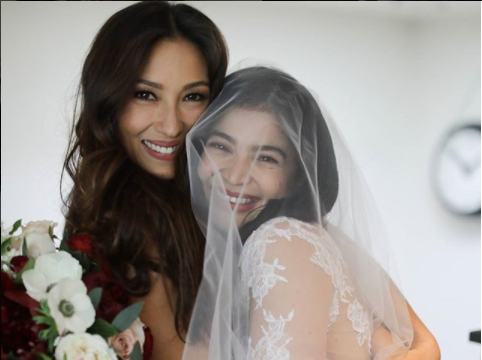 Perhaps people thought wrong when they surmised that the remarks ‘“You look fat” or “You seemed to have gained weight” can only come from Filipino aunties lacking delicadeza, because they don’t. Celebrities and personalities, who have their lives in the spotlight, are constantly scrutinized by the watchful public, and are also subject to mean comments, bashings and even trolling.

Solenn Heussaff posted on her Instagram page last June 25 a picture of her with her family, including husband Nico Bolzico and sister-in-law Anne Curtis. The photo wasn’t anything more than a beautiful family picture taken abroad, if only some netizens could be polite in their comments.

In the picture, Solenn and Anne can be seen standing in the middle, flanked by Erwan and his father on the right side, and the Heussaff matriarch and Bolzico on the left. Some netizens, however, thought it apt to point out that Anne seemed to have gained weight, with many assuming she’s pregnant.

“I think she is preggy,” wrote a certain Abigail (@mrs_abigail_brown). “She will announce it on her concert. Happy for you Anne.”

Anne has since shot down the assumptions that she is pregnant, replying, “@mrs_abigail_brown No. I’m not pregnant. It’s just the angle. And also all the egg tarts I ate.”

Solenn came to Anne’s defense upon seeing the remarks, commenting on her own post and telling people it’s a bad habit to always remark about people’s weight.

“Even if you [are] saying cute things, its really a bad habit to always comment about people’s weight,” Solenn wrote. “It’s always done in the Philippines by our tita’s and friends and has become like a ‘Hello’ in our society.”

Solenn added, “It’s really not nice and not proper. [Whether] it’s gaining or losing weight, people should stop. Really.”

Other people also came to Anne’s aid and defended her. “@annecurtissmith don’t worry you don’t look pregos [sic]. People just love to criticize instead of appreciating a nice picture,” wrote one Dumas (@evtrdu). “You don’t need to explain anything… Don’t assume until she claims it because you don’t want to spread self doubt on others.”

But whether Anne gained weight or not is a business of hers and nobody else’s. It’s a reality that being subjected to the rudeness of the public is a price that comes with fame, but the adage “If you have nothing nice to say, say nothing at all” sometimes just couldn’t ring any truer. JB