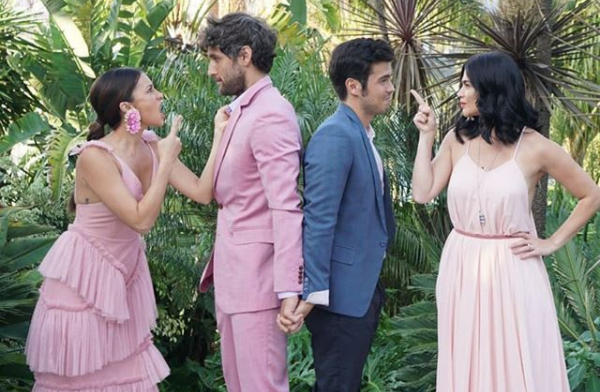 Anne Curtis and Solenn Heussaff jetted off to Portugal recently with their “bullied” husbands, Erwan Heussaff and Nico Bolzico, in tow. The trip was made to attend the wedding of their friends, Anne Gauthier and Mickael Cardoso.

Solenn’s Instagram post yesterday, June 24, showed the four lovingly posing by a fountain in Sintra, Portugal, with Solenn and Anne leaning on their husbands chests. “Four’s a crowd,” wrote Solenn. “Sintra with fambam.”

Four’s a crowd. Sintra with fambam

But it seems the happy photo was just a smokescreen to the reality that goes on behind the scenes. In another post, Solenn shared a picture of the four of them with fashion designer Mia Arcenas and husband Jacques Branellec. In the picture, the wives were captured making threatening poses to their husbands.

Anne, too, shared a similar picture in her own Instagram account, writing, “Rule number one of their #BulliedHusbandsClub — a happy wife is a happy life…”

Rule number one of their #BulliedHusbandsClub – a happy wife is a happy life 💘. . . Like this photo so much more! 😋 #anneotherdasneves

But it seems Erwan wasn’t having any of it, as he took a jab on his wife in his funny Instagram post yesterday, June 24. Erwan shared a picture of him and Anne posing by a staircase, with the two of them gazing at each other lovingly.

“‘Tale as old as time, song as old as rhyme.’ Who’s the beauty in this picture? I know… tough question. (It’s clearly me),” Erwan teased.

“Tale as old as time Song as old as rhyme” Who’s the beauty in this picture? I know… tough question. (it’s clearly me)

But the wives can be quite fickle, too, as they sure bully their husbands just as much as they show appreciation for them. Apart from the “bullying” picture that the wives organized later on, Anne also made sure she was on her husband’s good side when she shared a picture of the two of them outside the Pestana Palace in Lisbon. In the picture, the two are smiling at each other as Anne caressed Erwan on the neck

Solenn, too, didn’t miss in complimenting her husband Nico, who looked dapper in an all-pink suit. She, too, shared a photo of the two of them in the Pestana Palace. The two wore matching pink outfits and posed outside in what appeared to be a garden.

“I would marry you all over again,” wrote Solenn. “And you look sexy in pink bebu. A real man right there!”

I would marry you all over again. And you look sexy in pink bebu. A real man right there! #Anneotherdasneves

Perhaps another rule for the bullied husbands club could be, “Blink twice if you’re in danger.” But with the way things are going, it looks as if neither Nico nor Erwan will be blinking twice to rescue each other any time soon. JB