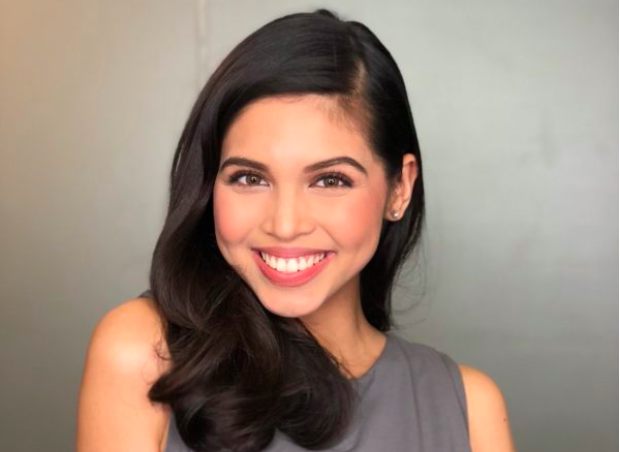 Maine Mendoza became the object of ire of some netizens yesterday, June 18, when a video clip of her during the “Juan For All, All For Juan Sugod Bahay” segment in “Eat Bulaga!” on the same day circulated online. The “Sugod Bahay” was held in Brgy. Sucol, Calumpit, Bulacan.

Mendoza, along with Jose Manalo and Paolo Ballesteros, came to the house of “Sugod Bahay” winner Leny Feliciano. The winner, who was wearing a pink shirt, started crying the moment the three arrived.

Mendoza and Manalo placed their mics near Feliciano’s mouth to hear her speak, but she was engulfed in her tears. Her response was, “Opo sobrang tuwa dahil mapapalibing ko na po yung anak ko. Makakabayad po sa funeraria.”

While the inconsolable Feliciano was speaking, Mendoza can be seen turning to the camera and making mocking expressions with her face.

Joey de Leon, who was sitting inside the studio of “Eat Bulaga!” asked Mendoza what Feliciano was saying, only for Mendoza to give an incoherent mumbling reply.

Mendoza repeated this again when she turned to Feliciano and asked, “Ano pong nangyari?” before mimicking Feliciano’s crying and mumbling once more.

Manalo, however, clarified what was going on for the people in the studio, explaining to them that Feliciano is happy because she can finally bury her son.

“Andyan po yang anak ko nakaburol (My son is still there, in a wake),” Feliciano replied, pointing to their house at the back as she cried. She then explained that her son, only 16 years old, passed away from complications in the kidney.

(He’s had multiple other ailments due to the complications. We had him checked up. He died in the hospital. We had him undergo dialysis but he could not take it anymore.)

Feliciano’s son is her second out of five children.

The video clip of Mendoza seemingly mocking the “Sugod Bahay” winner circulated on social media, with some netizens calling her out for her actions.

A certain Thom Sevilla (@sevillathom1) shared the video clip on Twitter yesterday, writing, “I find this part so insensitive knowing that the sugod bahay winner’s son/daughter (not sure) just recently died and they still continue this sick joke of replicating her emotions on what she felt during that moment.”

I find this part so insensitive knowing that the sugod bahay winner's son/daughter(not sure) just recently died and they still continue this sick joke of replicating her emotions on what she felt during that moment. You guys are so inconsiderate. @mainedcm @AngPoetNyo #JoseManalo pic.twitter.com/2VzIJaoUPz

(Why be like this, my idol? You’re making fun out of what she’s going through.)

Meanwhile, Mendoza defended herself by replying to the netizen’s tweet after an hour. Mendoza explained that they weren’t aware of Feliciano’s situation in the beginning.

(We share in her grief. We didn’t know at first what she was going through; we at first didn’t understand what she was initially saying.)

The video of the Sugod Bahay segment may be viewed below. JB

Pauleen Sotto clarifies rumors about Maine Mendoza: ‘I do not dislike Maine’

Maine Mendoza gets nostalgic about her days as student in Taft