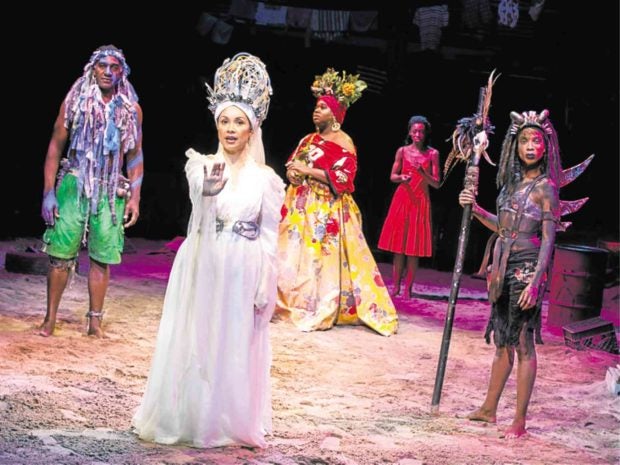 Lea Salonga in “Once On This Island”

LOS ANGELES—It’s a nice, quiet evening at home after our first ‘post-Tony win’ show,” Lea Salonga wrote to me in her note accompanying her answers to my questions in our interview via e-mail. She was in New York, the day after “Once On This Island,” in which she plays Erzulie, the Goddess of Love, won the Tony Award for best revival of a musical.

Lea, whose scheduled last performance in the beloved production is on June 24, leaves the show on a high note with its Tony win over “My Fair Lady” and “Carousel.” The telecast of America’s most prestigious theater awards featured the Filipino actress and the cast as they performed “We Dance/Mama Will Provide” at the Radio City Music Hall in New York.

Catch the Tony-winning actress before she bows out of her latest acclaimed Broadway role. Tickets and other details on www.onceonthisisland.com.

In the performance that I caught, Lea—who has one of the purest voices in musical theater, and sings with such clarity and flawless diction—both stood out and blended well with the cast that boasts glorious voices.

Current cast member Darlesia Cearcy will take over the role. Fil-Am Clint Ramos’ best costume design-musical nod was one of the eight Tony Award nominations that “Once On This Island” received.

For her next show, Lea reunites with Michael Arden, her “Once On This Island” director, in a Hollywood Bowl production of “Annie,” which played a significant part in the actress’ career when she was a young girl in the Philippines. Playing the title role, Lea showed exceptional talent and bravura at such a young age.

In the performances from July 27 to 29 at Los Angeles’ famed summer outdoor venue, Lea plays Grace Farrell, assistant to billionaire Oliver Warbucks (David Grier). In her return to the Hollywood Bowl since participating in a production of “The King and I,” Lea is joined by Ana Gasteyer (Miss Hannigan), Megan Hilty (Lily St. Regis) and Steven Weber (Franklin Delano Roosevelt).

More information, including about tickets, available at www.hollywoodbowl.com.

Excerpts from our interview via e-mail:

As your final performance draws near, what are your thoughts on this, your latest Broadway show? So many things! Every day, I take a mental log of what I need to pack up, what I need to do, what moments in the show I have to watch (because in the long run, there’s that tendency to take things for granted). But that said, all I’m doing is living each day to the fullest, so that once I board my plane home, I know that I haven’t missed anything.

Each show is different. But how unique was this experience for you? I mean…sand. And performing in the round. And our preshow. And goats and chickens. And singing almost constantly for around 90 minutes, learning some of the most difficult vocal orchestrations I’ve ever come across, knowing when to stand out and when to fall back, and my headdress lighting up like a Christmas tree every night!

All of these things make for tough days. It’s a lot of hard work to do this musical, as evidenced by how fast my heart beats after certain numbers. Even while sitting down.

What will you remember most about this show? I don’t know that there’s just one thing about it that I’ll take with me. I don’t think I’ll ever get those “coo coo’s” out of my head for sure! I’ll remember how ridiculously talented, generous, gracious and grateful everyone is.

In playing Erzulie, the Goddess of Love, what did you learn about yourself as far as love and life are concerned? That I have a greater capacity for love and compassion than I think. But also, that I will not take bullsh*t and will excise people from my life when that capacity has been depleted. And I will do so without regret. I do have my limits, too. I’ve also learned that love isn’t always pretty, and that sometimes doing the right and just thing requires being a b*tch.

At the start of the show, before you transform into the Goddess of Love, and toward the end, you wear a costume that you explained in another interview is your “tribute to every Filipino nurse who has been cast off into the world.” Can you talk about how wearing that costume every night, and being “this little Asian girl on this island,” gave you a sense of heritage pride? I don that polo and khakis as an armor that I’m only too proud to wear, in order to show our audience that my people send nurses out to the world, because of our almost infinite capacity for love and caring. There are Filipino nurses everywhere you go, so it makes sense that the one I get to play ended up on this island too, the only Asian amongst these islanders, but has created a family and community around her, anyway. That seems to be the case in real life.

A lot of talents came to see the show. Who was the one that thrilled you the most? Oh, everybody thrilled me—Hugh Jackman, James Franco, Robert De Niro, Josh Groban, Sara Bareilles, Elaine Paige, Jordan Fisher, Ben Platt, Whoopi Goldberg! But the ones that really got me were Angela Bassett (my daughter Nic did a Wakanda-style tribute when she came backstage, and was just so kind and gracious) and Lin-Manuel Miranda, who was a weeping, sobbing mess in his seat, and so sweet and hugged everyone backstage.

On the fun side, what was it like to be in a show where there are chickens—and a goat? Oh, it has its challenges, especially when that goat diaper isn’t fitting the way it should from time to time.

What are you looking forward to about playing Grace Farrell in Hollywood Bowl’s production of “Annie” in July? How personally significant is it to you that you will be part again of “Annie,” which was a milestone in your career? I have such a sentimental connection to that show that I’m just beyond thrilled that Michael Arden cast me as Grace Farrell for this production. It was very difficult keeping my mouth shut about it until the press release came out.

“Annie” was such a huge break for me, and began teaching me what it means to be the leading lady of a show. It taught me about what I was capable of, and what the future could bring. And the future turned out quite bright, so to be able to now revisit this show playing one of the grown-ups is a full-on, full-circle moment.

This is your return to the famed Hollywood Bowl. What do you like about performing at the Bowl? Besides seeing the picnickers and feeling envious that they can drink while the show is going on? (Just kidding.) Hearing that orchestra and enjoying the atmosphere! It’s such a grand, fabulous time for everyone!

TAGS: best revival of a musical, Erzulie, Goddess of Love, Lea Salonga, Once on This Island, Tony Award