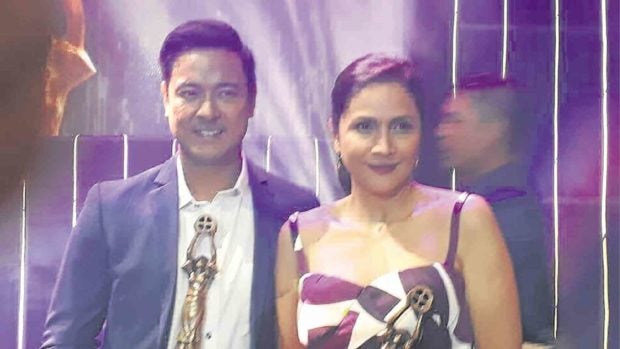 Indies swept the oldest award-giving body in the country.

“It felt like winning an award for the first time,” said actor Allen Dizon of his experience attending the Filipino Academy of Movie Arts and Sciences (Famas) awards ceremony on Sunday night, where he was named best actor for “Bomba.”

Allen said this in spite of the numerous honors he had won both here and abroad for Ralston Jover’s drama.

“Nakakapanibago!” Allen told the Inquirer on Monday: “I don’t remember competing with actors as excellent as the ones from this batch.”

The award was made “more special,” Allen said, because most of the nominees were present at this year’s venue—the Theatre at Solaire in Parañaque City. “It was a fun gathering. The ambience was festive. Even the crowd was very receptive,” recalled Allen, who added that his biggest aspiration was actually to be recognized in top-tier film festivals like those in Cannes and Venice.

Agot Isidro bagged the best actress award for her performance in Dan Villegas’ screen musical, “Changing Partners.” On her Instagram account, the actress said she felt “over the moon” because of the experience.

She added that when she was younger, she would often hear people comment: “Pang-Famas ang acting ah!” especially whenever she would throw tantrums.

“So this happened last night … #practicemakesperfect,” was what she captioned a photo of her while accepting the trophy.

Khavn dela Cruz’s “Balangiga: Howling Wilderness” was the winner of the best picture honor. It also won for Khavn, Achinette Villamor and Jerry Gracio the best original screenplay honor; as well as the best cinematography award for Albert Banzon.

“Changing Partners,” which is based on Vincent de Jesus’ musical of the same title, was the winner of best adapted screenplay (for De Jesus and Lilit Reyes).