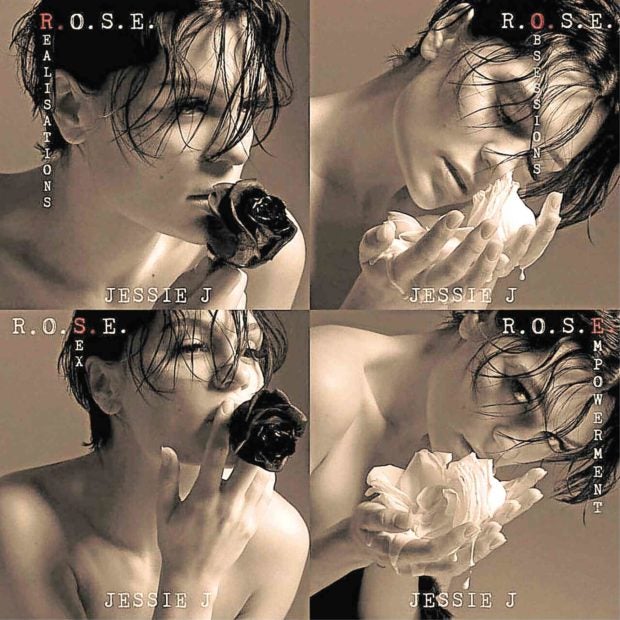 It’s hard to resist Jessie J’s chartbusting singles, from the spunky “Domino” and the anthemic “Flashlight,” to her funky collaborations with B.o.B (“Price Tag”) and Ariana Grande and Nicki Minaj (“Bang Bang”).

But, the 30-year-old London-raised songstress’ three-month participation early this year in the sixth edition of the Chinese performing tilt “Singer 2018,” where she was declared winner, revealed not just her prodigious ability to embellish her performances with soaring vocal arpeggiation and a healthy dose of melisma, but also her emotionally detached interpretations.

Her four-part latest album “R.O.S.E.” shows Jessie in a more flattering musical light. The recording may not be as thematically cohesive, but its sections—“Realisations,” “Obsessions,” “Sex” and “Empowerment”—give the 16-tune repertoire a clarificatory context that conveys the singer’s fears, insecurities and sources of inspiration, and helps her invest her renditions with depth and genuine emotions.

Jessie has the type of sturdy pipes that can make even mediocre melodies (“Think About That”) palatable or even attractive because of the richness of its tone and texture.

If “soullessness” is a perceived liability among gifted vocalists like Whitney Houston and Celine Dion, the British singer’s technique and vocal heft can be utilized to conceal her interpretive limitations.

To be fair, the album has gorgeous melodies that boost the lyrics’ accessibility and revelatory musings, from the prayerful “Oh Lord,” where she reveals the downside of fame (“I don’t wanna do this life anymore/ I’m always f*cking tired, I get so bored/ I feel trapped, and I hate that I’m insecure”), to her struggle with friends she can’t trust (in “Petty”), her abusive ex (“One Night Lover”) and her body image issues (“Queen”).

There are also poignant moments in “Easy on Me” (which features sage-like advice from her grandfather), “Someone’s Lady” (where Jessie
longs for someone to call her own), “Dopamine” (about the beauty and
loss of innocence), “Four-Letter Word” (her deep yearning to be a mother), “Play” (unrequited love) and “I Believe in Love” (about the redemptive power of hope).

Jessie can be thoughtful, provocative and contemplative (“Dopamine”), but she can also be scathing when she needs to be: “So inviting, but you were biting/Whole time, playing shy/If I showed the world what you said, it ain’t beautiful/They think you’re so sweet, but behind the scenes, you’re cold and cruel/Got a motherf*cking chip on your shoulder/You got issues, it’s official/Take my name out of your mouth, don’t chew.”

Like many of Jessie J’s songs, the tracks in “R.O.S.E.” benefit not just from her alluring musicality, but also from the infectious hooks that frame her mostly self-penned tunes, particularly in the radio-ready sound of “Real Deal,” “Queen,” the acid jazz-channeling “Glory” and “Play,” an irresistible dance ditty arranged in the same vein as Mariah Carey’s signature hit, “Emotions.”