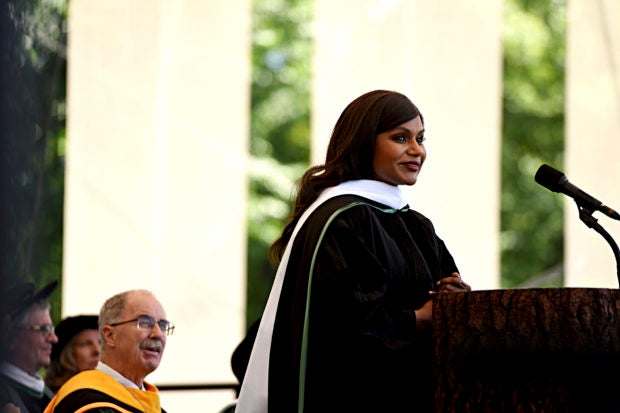 HANOVER, N.H. (AP) — Mindy Kaling took on President Donald Trump in her Sunday commencement address to Dartmouth College graduates, suggesting he may have “tweeted us into war” with Wakanda, the fictional country from “Black Panther”.

“I’ll tell you my secret, the one thing that keeps me going, my superpower: delusion,” Kaling said in her speech amid laughter. “This is something I share with the president, a fact that is both horrifying and interesting.”The 38-year-old actor, writer and comedian graduated from the Ivy League school in 2001. She received an honorary degree during the ceremony.
ADVERTISEMENT

Kaling remarked that Trump is a testament to how far someone can go if they believe they are the smartest, most successful person in the world. She encouraged the graduates to have “insane confidence” in themselves, even if it’s not real.

A few years after her own graduation, Kaling became a writer and producer for “The Office”, and played Kelly Kapoor on the show. She was the first woman of color to create, write, produce and star in a comedy show. That show, “The Mindy Project”, ran for six seasons. She has also written a pair of best-selling memoirs.

Her new film, the female-led “Ocean’s 8”, opened at number one this weekend.

Her experiences at Dartmouth have occasionally served as fodder for her writing and comedy. During her time there, she majored in play-writing and was the author of a popular comic strip on campus called “Badly Drawn Girl”. She tweeted a picture of herself outside her old dorm room Saturday night.

In her speech filled with self-deprecating humor, Kaling also offered practical advice to the approximately 2,000 graduates, like making sure to buy a toilet plunger.

The speech took on a more serious tone when Kaling specifically addressed the female graduates. To the male graduates, Kaling quipped that they should spend the next 30 seconds thinking about the extra money they will be making for doing the same job as a woman.

“Girls, we need to do a better job of supporting each other,” Kaling said. “Wouldn’t it be better to work together to dismantle a system that makes us feel like there’s limited room for us?”

Kaling also spoke of the importance of not adhering to a checklist in life. She shared her own “checklist” from her time after college, which included winning an Oscar, starring in her own show and having children by age 30. Kaling gave birth to her first child, Katherine, in December.

“Spoiler alert: I’ve only done one of those things,” Kaling said. “That is a really scary feeling, knowing how far I strayed from the person I wanted to be when I was 21.”

But she told the graduates to not be afraid to accomplish items on their checklist out of order, or to let it go altogether.

“I was not somebody who should have the life I have now, and yet I do,” Kaling said. “I sat in the chair you are sitting in right now, and I whispered ‘Why not me?’ and I kept whispering it for the past 17 years.” CC

Mindy Kaling is the mysterious Mrs. Who