Kris Aquino says Hacienda Luisita was ‘mismanaged’ by her uncle 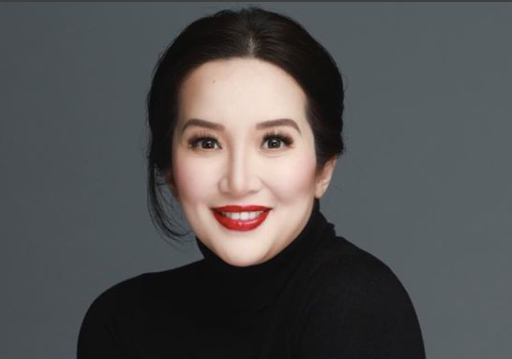 It’s apparent that Kris Aquino was much talked about recently, as the previous week did see her in a rift with Mocha Uson, Assistant Secretary of the Presidential Communications Operations Office. It seems, though, that things have quieted down since, and Aquino looks to have placed a period on this certain chapter of her life, as she took to her Instagram page last June 9 where she addressed the issue for the last time.

In her post, Aquino spoke about her parents’ legacy and Philippine democracy, saying that although her parents would’ve been proud of her for fighting for their name, her mother, the late former President Cory Aquino would’ve scolded her for her “clapback & using my fluency in written English.” Meanwhile, she added that her father, the late former Senator Benigno Aquino Jr., would’ve loved her feistiness.

It was a short bout of reminiscence for Aquino as she maintained that she lives in a territory of politically-motivated hate. “My last name is AQUINO – it’s part of my DNA & identity,” she wrote.

As her fans took to the comments section of her post to give their sentiments and support, one comment from a netizen, Alex (@alex_queen17), out of the blue asked her about her opinion on Hacienda Luisita.

“What can you say about the Hacienda Luisita incident?” asked the netizen in Aquino’s post.

The history of Hacienda Luisita is one subject that has over the years spurred countless discussions, political and otherwise, both inside and outside the halls of the Supreme Court. It has been the subject of protests in the streets of Mendiola, along with the sugar plantation itself, just as unresolved issues on land reform and farm workers’ rights have led to the Mendiola Massacre in 1987 and the Hacienda Luisita Massacre in 2004.

“It was bought by my grandparents with their money,” Aquino answered. “But unfortunately mismanaged by my mother’s brother. You asked for my opinion. That’s it.”

Aquino did not drop any names, but it is known that the late President Cory Aquino only had two brothers, Pedro Cojuangco and Jose “Peping” Cojuangco Jr.

Another netizen, a certain Jeremy (@heartdad), told Aquino that she should’ve said this to the public before to clear her name.

Aquino replied again, saying that she kept silent out of respect to her aunt, Maria Paz “Auntie Passy” Cojuangco.

“My favorite aunt was still alive, my auntie Passy…” wrote Aquino. “Out of respect for her I shut up. Nasigawan ako nung misis nung uncle na tinutukoy ko dahil [tinatawag] ko na si Noy dahil manunuod kami ng ‘Little Bossings.'” (I had been shouted at by the wife of the uncle I am referring to because I was calling Noy so we could already watch “Little Bossings”.)

(We were there because of auntie Passy, even though we had to endure someone who wasn’t doing anything but be rude to us. Auntie Passy is now in heaven with my mom. Now, I can already speak.) 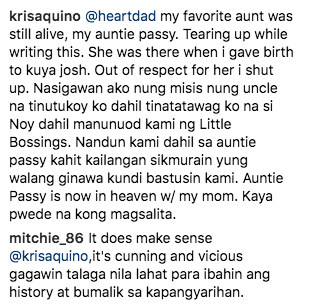 Again, Aquino did not name which aunt she was talking about, but it is known that her uncle Peping’s wife is Margarita “Tingting” delos Reyes Cojuangco, while her uncle Pedro’s wife is Rosario Cacho. JB