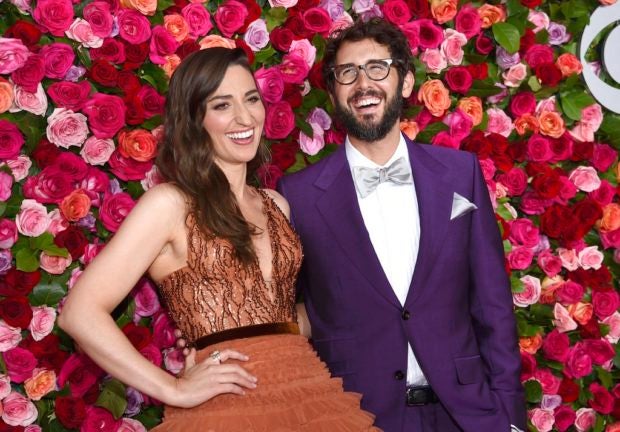 Tony Awards co-hosts Josh Groban and Sara Bareilles kicked the show off with a self-parodying duet on piano for all the losers out there — including them.

Neither Bareilles nor Groban have won a Grammy or a Tony despite selling millions of albums and appearing on Broadway. They turned that into a playful song.

“Let’s not forget that 90 percent of us leave empty-handed tonight. So this is for the people who lose/Most of us have been in your shoes,” they sang in the upbeat opening number. “This one’s for the loser inside of you.”

Two new musicals lead the nominations for the top Tony Award crown, with Tina Fey’s “Mean Girls,” and “SpongeBob SquarePants” receiving 12 nods each. The revival of “Angels in America” has 11, and the two-part play “Harry Potter and the Cursed Child” has 10. Many critics have tapped “The Band’s Visit” as their odds-on favorite to be crowned best new musical.

A selection of “Mean Girls” was near the top of the show, one of several productions that would be featured during the ceremony.

Getting buzz from appearing on the telecast can dictate a show’s future, both on Broadway and on tour. Broadway producers will be thankful this year that the telecast woould not have to compete with any NBA Finals or Stanley Cup playoff games.

For most of the previous awards season, shows like the Oscars and Golden Globes have acknowledged the issue of sexual misconduct and abuse of power. Bareilles and Groban will try to do that while also eviscerating any memory of last year’s Tony host, Kevin Spacey, who since then has been accused by at least 24 men of sexual misconduct or assault.

The pair will also hope to end a ratings slide following the 2016 edition that was led by “Hamilton,” which drew 8.73 million viewers. Spacey’s ceremony last year drew 6 million viewers, which represented a drop of approximately 31 percent in total viewers from the previous year.

The show will be a sort of victory lap for a Broadway season that saw grosses hit another record high by pulling in $1.7 billion — up 17.1 percent over last season’s $1.45 billion. Attendance was also up, coming in a 13.79 million, an increase of 3.9 percent at last season’s 13.27 million.