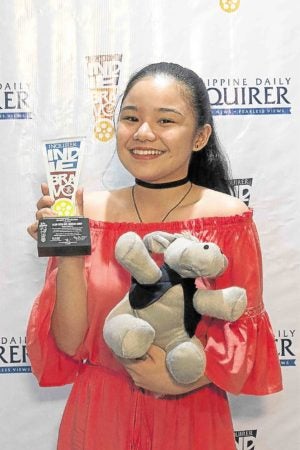 It sounded as if 18-year-old actress Angellie Nicholle Sanoy was more excited about receiving yet another Guyito stuffed toy, which is handed out by the Inquirer to Filipino artists who win in international film festivals. “Talaga po? Ang saya!”

When we caught up with Sanoy, she had just scored a best actress award for Ralston Jover’s “Bomba” at the ImagineIndia International Film Festival, held in Madrid, Spain, last May 31.

She seemed genuinely thrilled about this latest honor—her first solo acting prize from a festival abroad.

“It feels like I’m in heaven,” Sanoy told the Inquirer. “I couldn’t believe it when I first heard about it.”

Jover told her that she bagged the trophy a few weeks ago. “But I had to keep it a secret until the official announcement (last week),” she related.

About a month ago, Jover greeted her: “Hi, Best Actress!”

She was stumped. “I asked Direk: Why? I haven’t won anything yet naman.” Prior to the Madrid honor, the young actress had cinched two nominations for “Bomba”: best actress at the Gawad Urian and best supporting actress at Famas.

She also won best actress at the Sinag Maynila for the same role earlier this year. The girl is on a roll.

“I thought the movie had won,” she quipped. “I hope our film will continue traveling all over the world.”

According to its website, ImagineIndia aims “to promote friendship and cooperation between Asia and the European Union … by showcasing films from both regions.”

“I am so happy because not everyone is given the chance to have a film shown abroad,” she remarked. “It inspires me to keep doing well in all my projects.”

She was recently seen opposite Elizabeth Oropesa in the CineFilipino entry, Ronald Espinosa Batallones’ “Excuse Me Po.”

“This new movie is totally different for me,” she explained. “Aside from being a romantic-comedy, I play the tomboyish best friend of Jameson Blake.”

For the role, she cut her long hair short. “I look like a boy. But this hairstyle is perfect for summer,” she exclaimed.

Read Next
Celebs talk about the singer-performers they wish to emulate
EDITORS' PICK
Smart brings KCON:TACT especially 4U to subscribers from June 19 to 27
IATF recommends to Duterte face shield use in all enclosed areas
Red, yellow alerts in Luzon grid possible in coming weeks — DOE
Smart celebrates all kinds of ‘#SimplyLove’ for Pride Month
Leo Martinez pleads for senior citizens to be allowed to go out
He called bank: SJ Belangel aimed for backboard on game-winner vs Korea
MOST READ
Pacquiao ‘good choice’ as PDP-Laban standard bearer for 2022 – Koko Pimentel
DepEd chief Briones lying, teachers insist
Notes for next president: Huge debt, unemployment, hunger
Megaworld seeks P27.3 billion in Philippines’ largest REIT listing
Don't miss out on the latest news and information.