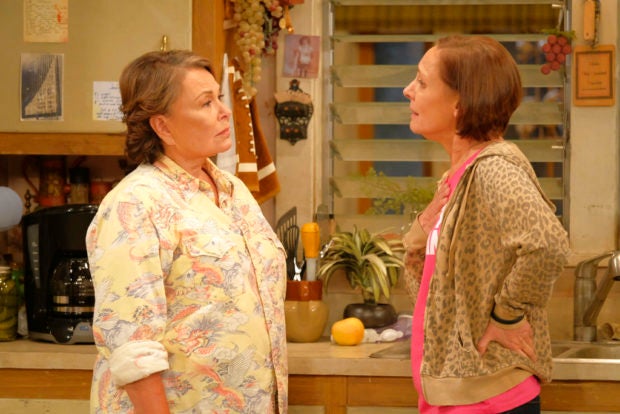 In this image released by ABC, Roseanne Barr, left, and Laurie Metcalf appear in a scene from the reboot of the popular comedy series “Roseanne.” 18.4 million viewers tuned in for its premiere. The unprecedented sudden cancellation of TV’s top comedy has left a wave of unemployment and uncertainty in its wake. Barr’s racist tweet and the almost immediate axing of her show put hundreds of people out of work. (Adam Rose/ABC via AP)

LOS ANGELES  — After her network dropped her show, streaming services dropped her reruns, and her agency dropped her for a racist tweet, Roseanne Barr is vowing she’s not finished.

Whether anyone will have her is an open question.

Mainstream television, where she saw soaring success both on the original “Roseanne” and the recent short-lived reboot, is probably out. But she finds herself in an environment flush with media outlets where the style of incendiary statements she was making long before Tuesday’s tweet is not a hindrance, but rather an asset.

“Whether or not she will see herself back on a major network is probably doubtful,” said Eric Dezenhall of Dezenhall Resources, a crisis-management firm. “If her goal is earning the big bucks again, network is where you get it, but I think that for certain people what years ago was a career crisis is now a brand extension.”

If Barr wants to present herself as a victim of a culture where political correctness has run amok, a stance she has already assumed on Twitter, she has a built in fan-base willing to embrace her next move, whether as an actress, comic or commentator.

“She does have people who will see her as kind of a brave First Amendment type figure,” Dezenhall said, “and you now have all kinds of outlets for entertainers, ranging from podcasts to streaming networks, that encourage just her kind of obnoxiousness … If you move lower on the food chain from networks, you can make an outrageous remark once a day.”

Rebecca Sun, who covers the entertainment industry for the trade publication The Hollywood Reporter, agrees that while network TV is a non-starter, Barr will find a home if she wants it.

“The country is certainly divided enough and partisan enough,” Sun said in an interview with The Associated Press. “I can easily see some sort of fringe right-wing media outlet wanting to capitalize on this publicity and give her some airtime.”

She already has at least one offer.

Michael Caputo, a former campaign aide of President Donald Trump, is planning to launch a streaming video platform called Bond in June. In interviews with Variety and The Daily Beast, he said he had already eyed Roseanne as a contributor in some form, and intends to pursue her more seriously now that she’s out of a job.

He tweeted at Barr that he could offer her a platform without the networks and executives that fired her. “Let your fans decide,” he tweeted.

It’s also unclear what exactly she would do on such a platform.

Other than the stand-up comedy career that preceded it, Roseanne has had little success outside of her sitcom.
And a return of that show in any form appears unlikely, as two of its executive producers and several cast members have condemned her and distanced themselves from her, while none have publicly defended her.

Prospects have varied for those whose careers have been upended by racial remarks. “Seinfeld” star Michael Richards has made only rare appearances in media since his 2006 racist tirade at a comedy club. Celebrity chef Paula Deen has been seen only slightly more after admitting under oath as part of a lawsuit in 2013 that she had used the N-word.

Mel Gibson is the closest thing to a successful comeback story. He spent some time in Hollywood exile after an anti-Semitic tirade during a 2006 traffic stop and racist rants caught on tape in 2010, but in recent years has directed the Oscar-nominated film “Hacksaw Ridge” and appeared in the major movies “Daddy’s Home 2” and “The Expendables 3.”

But it’s unclear how hostile Hollywood will be to comebacks in general in its current #MeToo environment, Sun said, where many men have been banished for sexual misconduct and won’t be welcomed any time soon.

“It’s hard to know with any certainty, because of these changing times and we’re finally not tolerating things we were tolerating before,” Sun said. MKH