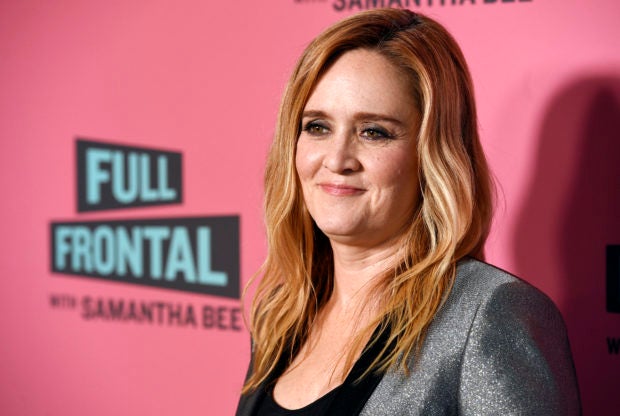 In this May 24, 2018 file photo, Samantha Bee, host of “Full Frontal with Samantha Bee”, poses at an Emmy For Your Consideration screening of the television talk show at the Writers Guild Theatre in Beverly Hills, Calif. Bee is under fire for referring to Ivanka Trump as a “feckless c—” on her TBS comedy show. White House press secretary Sarah Sanders on Thursday called Bee’s language “vile and vicious.” Image: Invision/Chris Pizzello via AP

NEW YORK (AP) — Comedian Samantha Bee apologized to Ivanka Trump and viewers on Thursday for using an obscenity to describe the president’s daughter, an incident that quickly thrust her into the middle of the nation’s political divide.

Her network, TBS, also said it was “our mistake, too,” in allowing the language on Bee’s show, “Full Frontal”, on Wednesday. Her show is taped and not aired live.

Bee called Ivanka Trump a “feckless c—” toward the end of a segment about President Trump’s immigration policies. She used the slur in urging Ivanka Trump to speak to her father about policies that separate children from their parents.

“Put on something tight and low-cut and tell your father to f—ing stop it,” she said.

Bee, a former correspondent on “The Daily Show” with Jon Stewart whose own show has been one of TBS’ big successes since it started in 2016, said that her language was “inappropriate and inexcusable.”

“I crossed a line, and I deeply regret it,” she said.

Before the apology, White House press secretary Sarah Sanders called Bee’s language “vile and vicious” and said executives at TBS and corporate parent Time Warner needed to demonstrate that such explicit profanity about female members of the administration would not be condoned.

TBS said Bee had taken the right step in apologizing. The network made no mention of any disciplinary action.

The car company Autotrader said that it would pull its advertising sponsorship from “Full Frontal”, calling Bee’s language offensive and unacceptable. Bee’s show is being honored Thursday by the Television Academy as one of the most “meaningful and relevant” on the air; the academy said the controversy over her language won’t change that.

The academy said its event is “non-political” and that Bee’s recognition is for “her engagement in 2017 on the subject of sexual harassment and the #MeToo movement.”

Coming two days after ABC canceled “Roseanne” following a racist tweet about former Obama adviser Valerie Jarrett, Bee’s remark was immediately seized upon by culture warriors. Some conservatives upset about the “Roseanne” cancellation suggested Bee should meet the same fate, while liberals wondered whether Bee’s words were any worse than some used by President Trump, notably in the “Access Hollywood” tape.

“I dream of a life where we hold our president to a higher standard than we hold comedians,” said another comic, Marie Connor, on Twitter.

Ari Fleischer, former press secretary to President George W. Bush, said there was a double standard when you compare media reaction to Barr and Bee. He said the media would go “nuts” if a conservative Republican used the same slur that was used by Bee against Nancy Pelosi.

“The outrage would be instant and overwhelming,” Fleischer said online.

Liberal filmmaker Michael Moore noted that President Trump and his aides had not condemned Barr’s racism and tried to “confuse the issue by going after Samantha Bee’s brilliant rant against Ivanka.”

Bee’s commentary had the potential to be a corporate headache. Time Warner, which owns channels including TBS, CNN and HBO, is in the process of being acquired by AT&T for $85 billion. The Justice Department has sued to block the deal, however, due to monopoly concerns, and a decision on whether or not it will proceed is expected June 12.

One of the sharpest attacks against Bee came on corporate cousin CNN. Bee is no better than the behavior she sought to criticize in her immigration segment, said CNN anchor Brooke Baldwin.

“To use that word from a woman to another woman is offensive,” Baldwin said. “Wrong is wrong, whether you’re on the left or the right.” CC

Read Next
Kevin Bacon and his bro to sizzle your summer with new album
EDITORS' PICK
2 Chinese nationals arrested in raid on another unlicensed COVID-19 hospital in Pampanga
SM prepares for ‘safe malling’
NBI, Immigration to join hunt for ‘underground’ medical clinics
Notice of 2020 regular meeting of stockholders June 18, 2020
Leveling up your ‘lutong bahay’ with the kitchen companion you never knew you needed
Duterte approves Metro Manila’s shift to GCQ starting June 1
MOST READ
Duterte approves Metro Manila’s shift to GCQ starting June 1
Revillame tells Roque: ABS-CBN is in my heart despite being in rival network
NCR is ready for GCQ — Palace
Año: Quarantine passes not needed in GCQ, movement restricted to essential travel
Don't miss out on the latest news and information.