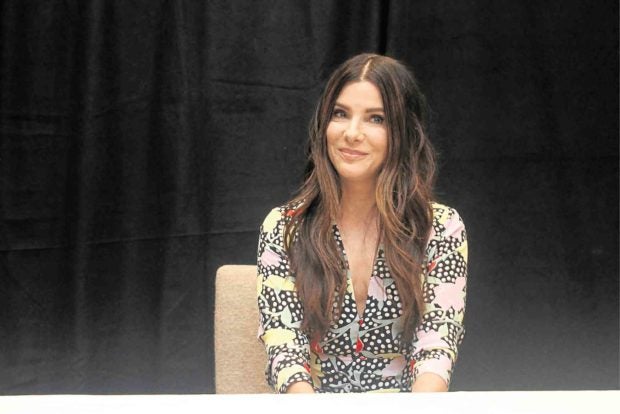 LOS ANGELES—“I had to learn … not make so many jokes and shut my mouth when I wanted to open it.” That’s what “Ocean’s 8” star Sandra Bullock said was how she approached playing Debbie Ocean, the sister of the original “Ocean’s” movies’ protagonist, Danny Ocean (George Clooney).

In real life, Sandra does not temper her impulse to crack jokes. In interviews, the actress sits there, looking serious, but you can almost see her humorous mind working, thinking of the next amusing quip.

In our recent chat at The Whitby Hotel in New York, our wisecracking interviewee looked chic in a patterned, V-neck Rixo London maxi dress, her legs often crossed and hands clasped.

An apt movie in this era calling for more female empowerment, “Ocean’s 8” is an all-women installment of the heist series.

To clarify, George does not appear in the movie, but his character, Danny, is referred to.

Sandra, the doting mother of two kids, has spoken out for discontinuing the phrase “adopted children.”

In this movie, your character, Debbie, is Danny Ocean’s sister. Did you talk to George Clooney about that? George and I talked at a friend’s party, and he was like, “Are you going to do it?” I was like, “I think so.”

The beauty about George is that he is still carrying the torch of that Rat Pack group and that essence and fun. We wanted to have the fun, too. We didn’t have a bar on our set. We weren’t shooting in Vegas, but we wanted the spirit of teamwork and family. I wanted everyone to see these women as a family supporting each other, because you don’t see it represented like that enough.

What do you think Debbie has that Danny does not? Well, breasts (laughs). But they are both thieves. And they can’t help themselves. They’re a family of thieves and they are very similar. They are always on the take, on the make and always thinking about what game they can run. Nothing is just ever normal.

A dinner table with the two of them is like how are they going to get out of paying the check? George has his own elegance and vibe. I had to learn to be calmer, sit back more, not make so many jokes and shut my mouth when I wanted to open it. So I had to learn to be cooler than I actually am.

Do you have friends you can steal with, as in the movie? I do. I’m not going to tell you whether we steal or not (laughs). To me, the most important thing in this film wasn’t the heist. I knew that would be fun. But, it was important to show how these women supported each other, and wanted the best for each other.

That’s the same thing with friendship. As you get older, your circle of friends gets small because you realize you are who you are, and those people love you for exactly who you are and allow you to feel safe being that way.

But I don’t wear much jewelry. I’m afraid I am going to lose it. I have two wild children, and we are outside a lot. Can you see me bejeweled as I am playing baseball with kids? I love jewelry when it’s beautifully made. But, they aren’t as good as a real friend.

If someone gave you a $150-million Cartier necklace, what would you do with it? Well, is it tax-free (laughs)? If they are willing to pay the taxes on it, I would have it separated into different pieces of jewelry, give some to my friends and family, make a couple of pieces for myself and put some aside for [my daughter] Laila. I don’t think [my son] Louis is much of a diamond guy. And Cartier is not going to give me a $150-million dollar necklace (laughs).

That kind of jewelry is good for show, or if you are royalty, because that is to be expected.

The last time we talked, you discussed your complete commitment to your son. What has changed since then? Yeah, my daughter. I now have a complete commitment to my son and daughter. I have a beautiful little girl for the last two years, named Laila. And she is powerful. Yeah, life changed dramatically again two and a half years ago, and the family is complete. Yes, everything I do is about my kids.

Do they get along well? Oh my God. As much as they want to kill each other, they fiercely love each other and they defend each other, even against me (laughs). But that’s what you want. You want them to be independent of you.  They are going to be with each other for the rest of their lives, long after I am gone. So, there’s so much love between the two of them.

What has motherhood taught you about yourself? I thought I was very open and patient, but no, I realized how impatient I was and how I got very good at saying “no.” I was always worried about their safety and doing the right thing that I said “no” to them a lot that it just became a habit.

I have to stop myself and go, “Yes.” I’m learning that I have to let go a bit, and I have to not be so strict about everything, because life is too short.

There’s a reference in the movie to women being invisible. What’s your experience with that? We’ve all seen a lot in the last year and a half. That line—I bugged Gary Ross for so long to put that line in. He was like, “I don’t know where to put it.” We had to find a place and we found it.

As a woman, in a weird way, I’m comfortable with being ignored. I would like to not draw attention to myself, because then you can do more.

But to be ignored on a professional level, when you’re blatantly ignored on a face-to-face level or you realize that you’re just a pawn, it’s disheartening.

I learned that pretty late in my career. Almost every woman in this film had variations of that moment.

Email the columnist at [email protected]. Follow him at http://twitter.com/nepalesruben.