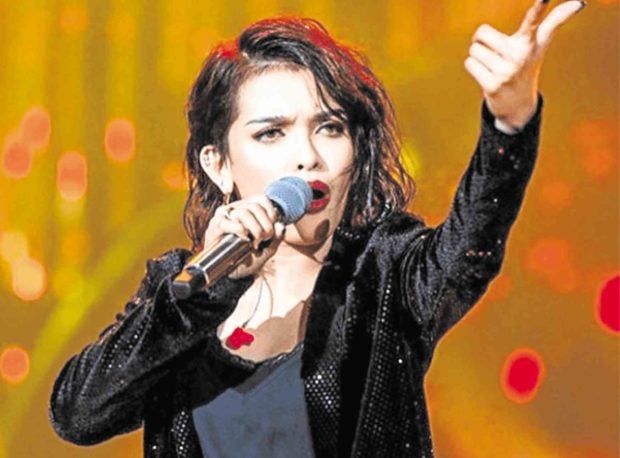 In hopes of maximizing the exposure she got from her stint in the music show “Singer 2018” in China, KZ Tandingan said she’s planning to record and release a new album in the said country.

“It’s going to be an all-original album. And if we could include a Mandarin track, that would be better because the people will appreciate my efforts more,” she told reporters at the recent launch of the online talent contest “Super K Star!,” in which she will serve as one of the celebrity mentors.

“Super K” is organized by her management company, Cornerstone Entertainment, and the Chinese social media app/short video-sharing platform Kwai, which will help promote KZ and her music in China.

The 26-year-old music artist related that she would buckle down to work after her major solo concert, “Supreme,” on June 22 at SM Mall of Asia Arena. “For now, we’re focusing on my show. Actually, we had to postpone our preparations because of ‘Singer 2018,’” she said.

The soul-R&B singer wowed Chinese fans with her fiery rendition of Adele’s hit “Rolling in the Deep,” which showcased her rapping skills.

KZ said the main reason she entered “Singer 2018” was to expand her market to China.

“That was our goal … Winning the show didn’t cross our minds; we knew that would be a tall order. I’m just thankful for the opportunity, because not many foreign artists manage to get in,” she said. “I hope what I accomplished could also help other local artists looking for a break abroad.”

KZ, who’s more than willing to join another singing competition if it meant being able to represent the Philippines on the world stage once more, added: “I’m always open to things that will help me grow as an artist.”

“Super K” intends to discover new stars through a series of screenings and challenges via the Kwai app, which has 750 million users in China alone.

Aspirants will be required to upload videos showcasing their talent—singing, dancing, etc—and append them with the hashtag #SuperKStar.

The social media tilt isn’t seeking a specific type of artist, and it’s open to people of all ages. Contestants will be judged based on their technical skills and popularity ranking. The grand winner (could be one or more) will be signed with both Kwai and Cornerstone, and will be given a chance to perform in China.

“I’m looking for … [people] who are passionate and willing to listen and improve themselves I will evaluate my mentees to see what … we could work on,” related KZ, who will be joined by fellow Kwai ambassadors Kyla, Jay-R, Markki Stroem, Claudia Barretto, Jayda Avanzado and Kyle Echarri.

“This isn’t going to be a one-way mentoring. By teaching the contestants, we also hope to learn from them,” she said.