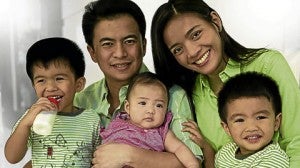 Juggling TV newsroom work and parenting is a constant challenge to Vicky Morales who, for the longest time, thought she would never have kids.

“These days I’m always rushing. I used to have time for a movie or even just a massage. Now… I don’t remember the last movie I saw. That was probably more than six months ago,” she told the Philippine Daily Inquirer.

The GMA 7 news anchor-TV host had been married to lawyer King Reyno for seven years before she got pregnant with twins Leon Alfonso and Filippo Luis. The boys are now three years old.

“When the twins came, I really felt it was more than I ever wished for,” she said.

Seven months ago, Vicky gave birth to her third child, a daughter, Daniela Simone. “When she came, I felt very blessed,” she said.

Vicky said she had second thoughts about flying to Europe recently to cover the wedding of Prince William and Kate Middleton and the beatification of Pope John Paul II. “I’m still breast-feeding Daniela. Doon ako nahirapan, that I had to be away for a while. I was committed to breast-feeding her for a year. I wasn’t able to do that for the twins.”

Quality time with her husband has somewhat diminished, too, Vicky confessed. “He’s busy in the mornings and I’m busy at night. We just send each other text messages or e-mails. [But] this morning I attended a function that he helped organize. I make time for things like that.”

Vicky, who has been a broadcast journalist for the past 20 years, said she never planned on becoming one. She took up a management course in college: “I guess fate brought me here,” she said. “I enjoyed my communications subjects so much, that one of my professors introduced me to someone from ABS-CBN. Then I auditioned at GMA 7.”

She could still remember her phone conversation with former GMA 7 executive Dante Padua, who told her she had passed the auditions.

In return, she has remained loyal to the network. “I’ve also put in a lot of work. Whenever they need me, I always make myself available,” she said, “even when there are conflicts in my schedule.”

Vicky is seen on TV every day. From Monday to Friday she co-anchors the late-night newscast “Saksi” with Arnold Clavio. She hosts the Kapuso public service program “Wish Ko Lang,” which airs Saturdays. Sundays, she is on the news magazine show “Good News” on GNTV 11.