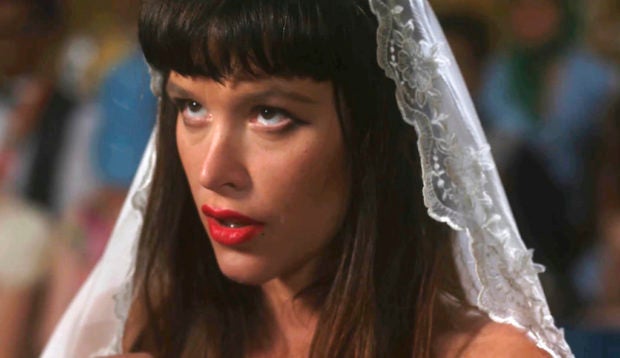 This undated image from video provided by Paz De La Huerta Inc. shows the actress Paz De La Huerta in her film “Valley of Tears,” which she wrote, directed and produced over a 12-year-period, and is now trying to finish with a crowdfunding campaign. She began making it years before publicly accusing Harvey Weinstein of rape, and in the movie, a girl is raped by a butcher who then cuts off her feet. But the rape scene isn’t about the media mogul, De la Huerta said, nor does it depict the assaults she said took place in 2010. (Paz De La Huerta Inc. via AP)

The movie “Valley of Tears” is her take on the Hans Christian Andersen story “The Red Shoes,” about a little girl with a pair of enchanted shoes. The story is tragic; the shoes force the girl to dance until she asks an executioner to cut off her feet. A 1948 film set the story in the world of dance; a ballerina seeks to be the best by wearing the shoes and faces the same fate.

De la Huerta told The Associated Press that she took her version of the story even further. The girl is raped by a butcher who then cuts off her feet.

But the rape scene is not about the media mogul, she said, nor does it depict the assaults she said took place in 2010. De la Huerta said she wanted to include the scene, in part, because she had an experience on another film where she felt a sexual assault scene was not shown from victim’s perspective.

“I wanted to show the rape scene from the point of view of a woman that had actually been raped,” she said in an interview.

Prosecutors and police in New York are investigating de la Huerta’s accusations that Weinstein raped her twice in her apartment. The “Boardwalk Empire” actress said she could not comment on the investigation.

Weinstein has denied any nonconsensual sex with the actress or other women who have accused him of assault.
De la Huerta said she began making the movie 12 years ago. She said she has one scene left to shoot and then must edit the film. She hopes to raise as much as $500,000.

De la Huerta said in making the film, she drew on both the emotional trauma of her encounters with Weinstein and her struggle with physical pain after she fractured her tailbone during an on-set accident in 2011 where she was struck by an ambulance. In some of the scenes in her movie, she said she had to dance while in extreme pain.

“I shot while I was in horrific pain, and you can see it on my face — those scenes I’m in tremendous pain myself. They really reflect where I was at the time.”

She had a surgery a few years later that she said “saved her life,” and she also wanted to reflect the feeling of redemption in the film — so she is adding a twist that will make the movie a bit more positive than its artistic predecessors.

“I really believe this film is about the end of suffering,” she said. MKH