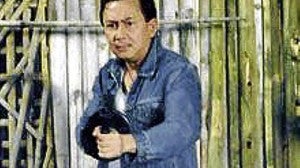 After “Asiong Salonga” romped off with the best picture and other major honors in the recently concluded Metro Manila Film Fest (MMFF), we were asked if the ER Ejercito starrer deserved to win all those awards. Our take on the P64,000 question:

In terms of intention, the action film bio has a clear edge over the competition, which is generally characterized by “commercial” products that emphasize the lighter and more diverting aspects of life. Dramatically shot in black and white for that period ’50s feel and look, Asiong Salonga is gritty as all get-out on point of telling contrast.

After a while, however, much of the grit feels “designed” rather than authentic, because it favors an artful lights-and-shadows interplay further heightened by literal smoke and figurative mirrors—a visual construct that leaves us worried about the health of all of those huffily and puffily smoking actors on the set, whose billows of smoke help create all those dramatic and high-contrast visuals.

Talk about artful constructs of the perfervid, neo-Rembrandt imagination, there’s even a scene in the film that has two calesas full of goons firing away at each other while their rigs clatter through the streets! The contrast between the goons’ high-power armaments and the slow and even bucolic progress of those horse-drawn rigs is sweet-sourly fascinating to behold.

Less subjectively put, the movie doesn’t quite make it as a genuinely outstanding film, because all of its striking visualizations are utilized to build up and honor a questionable protagonist. Yes, he’s a Tondo-Pinoy version of Robin Hood who shares his loot with the poor, and that he’s a loving family man (but with a girlfriend on the side) and a loving son—but, those “virtues” aren’t enough to distract us from the fact that he’s also a protection racketeer, criminal and killer who lives and dies unrepentant.

No ‘Bonnie and Clyde’

To be sure, other crime-caper movies like “Bonnie and Clyde” have similarly dramatized the amoral exploits of criminals and serial killers. But, they made an effort to limn their antiheroes’ “character arcs,” the better for viewers to understand them as people. The Asiong Salonga bio falls short in that regard, so the viewer is left wondering why he should care what happens to the petty hood and his cruddy partners in crime.

Which is not to say that the movie shouldn’t be seen. For all of its artifice and myopic moral compass, it still has a visual energy that’s more arresting than many of the play-safe, formula flicks showcased in the MMFF. Just don’t expect it to hit the heights of authentic significance and substance.

Ditto for the performance of Ejercito as Asiong. He brings to the film a certain grit and swagger that are idiosyncratically interesting to behold, but he’s patently too mature for the role.

Be that as it may, we credit the star-producer for his determined effort to revive the Filipino action film.

The movie’s considerable success augurs well for the dormant film type’s prospects, especially if Ejercito follows up with another action-drama, even if it doesn’t have him playing the lead role—because it stands to reason that the new Filipino action movies should top-bill a younger breed of screen heroes.