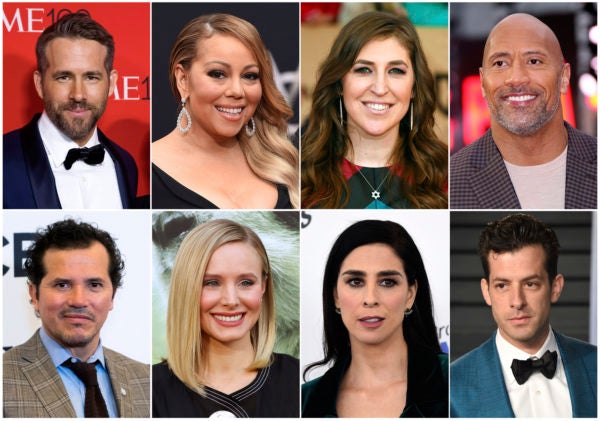 NEW YORK (AP) — Dwayne “The Rock” Johnson has discussed his battle with depression. Mariah Carey recently revealed she has bipolar disorder. Prince Harry said he needed counseling to deal with years of grief and anger following the death of his mother, Princess Diana. And “Deadpool” star Ryan Reynolds has acknowledged dealing with anxiety disorder.

As the stigma surrounding mental illness has declined in recent years, so has the reluctance many have had to discuss their own mental health issues, including celebrities. It’s become the new norm for stars to divulge vulnerabilities once kept closely guarded.

“I think anybody talking about it will help de-stigmatize it over time, but I think in particular celebrities or sports celebrities, if they have a platform and they’ve gone through any kind of issue with mental health, it’s good for them to share their stories, if they’re comfortable with it,” Johnson said in a recent interview.

Reynolds echoed that sentiment at the Monday premiere of “Deadpool 2”, where he explained to The Associated Press why he went public about having anxiety disorder.

“Talking about it for me has helped in some ways,” Reynolds said. “In this age of toxic masculinity, there’s a lot of dudes out there that have a tendency to sort of bottle it up and keep it in, and think that they just sort of — they’ve got to be a tough guy and soldier on. But that’s not necessarily true.”

Last year, Prince Harry was lauded for revealing he sought help to deal with his emotions following his mother’s death when he was a child. He struggled with anxiety, grief and rage and said he was close to a breakdown several times.

Diane Hughes is a professor of Applied Psychology at New York University, specializing in adolescent development. She sees great value in celebrities and sports figures talking about their struggles, past and present.

“I think there is a benefit to it because it helps de-stigmatize it and to normalize it a little bit,” Hughes said.

She added: “There’s a lot of stigma attached to mental health issues, especially among teenagers because adolescents are constantly comparing themselves to their peers and are very self-conscious and worrying, (thus) creating a stigma to mental illness and help seeking.”

That’s why the Child Mind Institute, which provides mental health services to children and families, enlisted the help of dozens of celebrities for its new campaign called #MyYoungerSelf for May, which is Mental Health Awareness Month. It asks celebrities what they would tell the younger version of themselves.

Actress Kristen Bell would warn herself not to be fooled by the idea of perfection. Grammy-winning DJ Mark Ronson talks of being overtaken by panic attacks as a teen. And Sarah Silverman says there should be no part of your body that you should be ashamed of, and that includes your brain.

Each participant contributed a childhood photo and a homemade video.

“We know that when famous people basically stand up and say, ‘I suffered and I got better,’ it has a dramatic effect on all of us, but particularly on young people who are so susceptible to the imagery they see when people wear certain clothes or people like certain music,” said CMI President Dr. Harold Koplewicz.

Actress Mayim Bialik of “The Big Bang Theory” remembers feeling isolated when dealing with depression. She looks forward to seeing the shame around mental health issues fall away — and if talking about it publicly helps, she’s willing to do it.

“I’m not looking to vomit my entire life onto the internet,” she said in a recent interview. “But I do feel it’s very appropriate, especially for so many young people who feel alone, the way I felt alone, to talk about anxiety and obsessive-compulsive disorder and panic disorder and depression and all the other things that many of us deal with, you know, when we’re teenagers and even when we’re adults.”

Tony Award winner John Leguizamo agrees that famous people speaking out can help to de-stigmatize mental health issues, but it’s also something that needs to be taught at home.

“We have to have a little more compassion. First of all, it starts with how you talk to your kids about how to show compassion and empathy to anybody who is different than you or is experiencing any sort of difficulty,” Leguizamo said.

He added: “I think that’s where it starts, then you have to have legislation to help them get the help they deserve.” CC

Mariah Carey on her battle with bipolar disorder

Read Next
In ‘Solo’, a battle for the soul, and tone, of ‘Star Wars’
EDITORS' PICK
The Best Tech Gifts For The 2022 Holidays
DBM releases P5.2 billion for 9.8 million beneficiaries of targeted cash transfer
COA says over 4,000 pending audit backlogs will be resolved in 2 years
Noche Buena items price hikes are justified and can’t be controlled – DTI official
The vivo Y16 makes the season of giving more thoughtful for the whole family
House energy committee chair Arroyo bats for cheap electricity
MOST READ
LOOK: Alyssa Gibbs finally marries fiancé five years after engagement
Claudine Barretto asks for prayers as she undergoes thigh surgery
Trader duped by seniors in ‘Marcos gold’ investment
St. Benilde back in NCAA Finals after 20 years, knocks off San Beda
Don't miss out on the latest news and information.