Diane Keaton on her beloved late mother, being a mom herself and an ‘old maid’ | Inquirer Entertainment
Close
menu
search

Diane Keaton on her beloved late mother, being a mom herself and an ‘old maid’ 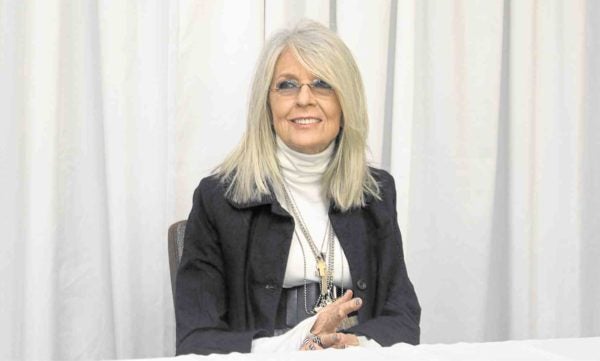 LOS ANGELES—Happy Mother’s Day to all women who nurture, inspire, motivate and care for people, young and old!

Diane Keaton, in our recent interview, spontaneously brought up her mom, Dorothy Deanne Keaton Hall, who was a Mrs. Los Angeles contest winner, and how much she loved her. Dorothy passed away in 2008.

The Oscar and Golden Globe best actress winner for “Annie Hall” walked in, resplendent in the unique fashion style she became known for since that iconic role in 1977.

“This is the Comme des Garcons look. I love it,” she said in her charming giggly manner. Adored for being a self-effacing bundle of nerves, Diane has an infectious, quirky vibe that just wins you over.

“I have layers of slips on,” she explained her full gray skirt. “And this is an old turtleneck and a coat.” She wore black Louis Vuitton lace-up boots.

To complete her look, Diane piled on several necklaces with crucifix pendants. “OK, now you know I have a problem with style,” she quipped. “I’m not even religious. But I like the cross. They’re fascinating to look at.”

Since she was promoting director Bill Holderman’s “Book Club,” Diane was asked if there was a book that changed her life. Probably not “Fifty Shades of Grey,” which she, Jane Fonda, Candice Bergen and Mary Steenburgen, as members of a monthly book club in the comedy, read—and, by coincidence, impacted their lives.

“Nothing in the area of a male/female love, but family,” Diane answered. “I remember what made me love my family more was ‘The Diary of Anne Frank.’ I will never get over it, how tragic it was. And how they lived and lost each other. It made me very sad and appreciate my own mother and father (Jack Newton Hall, who died in 1990). So that for me defined love—on the edge of loss.”

On how she found her voice and determination to break barriers, the rare true-blue Los Angeles native replied, “Again, for me it gets back to my family. My mother was somebody who always had big dreams, but never the opportunity. She instilled in me to be confident because one of the qualities that I had in the beginning was insecurity. She said, ‘You can use that, too… Just carry on and pursue your goals.’”

She added, “I always think of my mother. She was the mother of four. She was fabulous. She was Mrs. Los Angeles.

“I remember being a little girl at home in Highland Park (Los Angeles). I must have been 7 when all these people came into our house in the morning. They were looking at our house because (as Mrs. Los Angeles) you had to show that you were a good housekeeper, that your house was nice and what your specialty was. My mom’s was baking a cake.

“I remember that she had ambition, but she didn’t have the opportunity to follow her dream. She instilled that in me—to follow my dream.”

Diane is a mother herself, to Dexter and Duke, both adopted. She said: “Duke is still in high school. Dexter is a lifeguard. She is a swimmer and she’s going to college.”

On working with the three actresses in “Book Club,” Diane said, “I’ve never worked with Jane, Candy (Candice’s nickname) and Mary, so it was a total surprise. I knew it was greatly cast, though.

“Getting to know Jane, Candy in particular and Mary— they are, of course, fabulous people. They’re extraordinary. I shared a makeup trailer with Jane and her dog, Tulea. She is smitten by her dog. Jane is the consummate pro and she is brilliant, too, which is sad for me (laughs).”

Diane, as a mom (her name is, well, Diane) of two daughters pressuring her to live with them, has wonderful chemistry with Andy Garcia, who plays Mitchell, a pilot. Andy plays the charming suitor to the hilt. 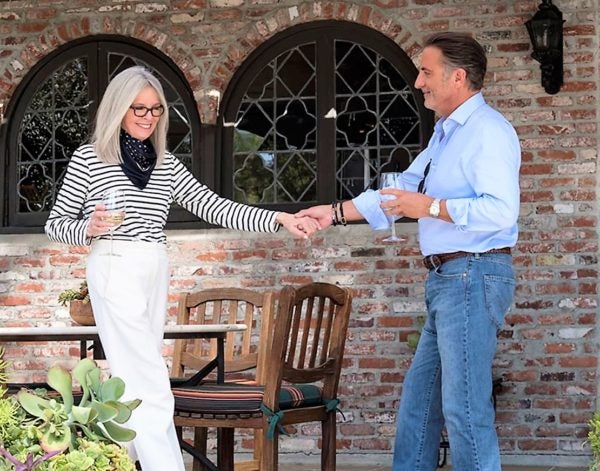 Diane Keaton on her costar Andy Garcia in “Book Club”: “All the women are going to love him.” Photo by Paramount Pictures.

Their characters meet for the first time as seatmates on a plane where Diane, playing a lovable klutz, accidentally lands her hands on Andy’s crotch.

“That was our first scene to shoot,” Diane recalled with a grin. “We just improvised. So it was just like playing around and having fun with a friend.

“All the women are going to love him and he’s going to be the lead in these romantic movies.”

“Has love ever been a surprise?” she repeated aloud our question. The actress’ reported past dates, boyfriends or partners include Al Pacino, the late Steve Jobs, Warren Beatty, Woody Allen, Jack Nicholson and even Keanu Reeves (both their reps denied the romance).

“That’s a hard question because I was always the first to have the crush on the man I was interested in. I think men had to get used to me before they started to like me (laughs). Love is a puzzle.”

As for the possibility of another romantic relationship, Diane said, “I doubt it’s going to happen. But you never know.”

Diane brought up her mom again, on how Dorothy did not have the opportunity to fulfill her ambitions. “I saw what my mother had to do and, no, that wasn’t going to happen to me. And that is why I’m single. Look at me, I have never been married.

“I am what they used to call an old maid. I am, but I don’t think I was marriage material, honestly, because I’m too independent. I am still pretty cheerful about life (laughs).” 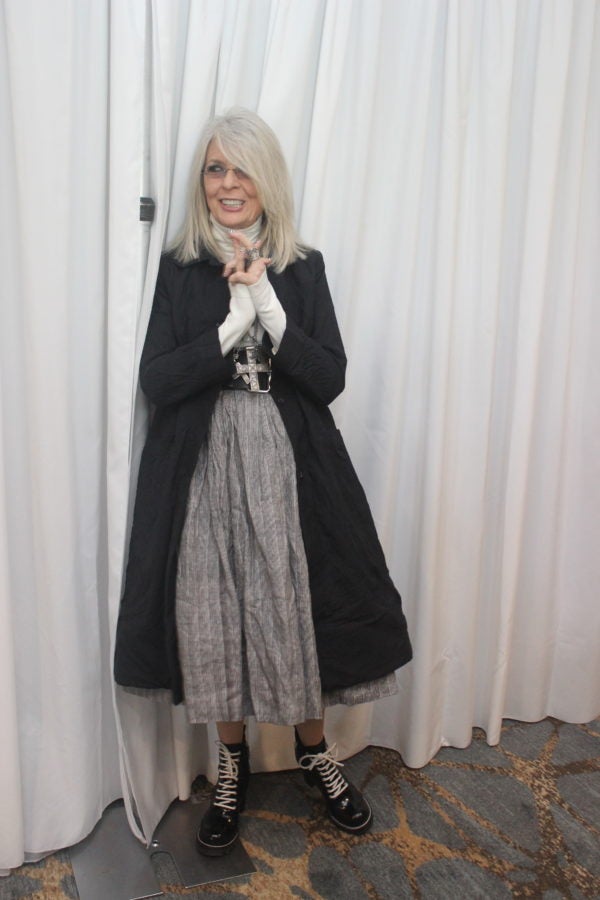 Diane refused to comment further on Woody being accused of child molestation by his daughter, Dylan Farrow, except for these words: “All I am going to say is that Woody is my friend, and I stand by him. And what he said, I believe is the truth.”

Diane, who is 72, declared, “There are many interesting things about it (her age). Things that you don’t notice when you are younger. For example, nature. I’m taken to getting in my car and driving on the road, much more than ever before. And seeing the world, California, which is one of my favorite places, Nevada, Arizona and the West.”

On the Time’s Up movement, she commented, “For me, the most important thing revolving around that is equal pay. That’s what interests me. Because I do feel that women aren’t paid as fairly as men.”

The author of two books, “Then Again” and “Let’s Just Say It Wasn’t Pretty,” shared what she learned from writing: “What I found out about myself was that I was much more driven than I told myself I was. Because I was constantly pursuing goals. I missed out on things because of my being goal-driven.

Diane confirmed that she’s writing another book. And the subject is? “My poor brother, Randy. He’s a very interesting character. I am two years older than him. I was the first-born.”

Read Next
Every day is mom’s day for Mama Juday
EDITORS' PICK
Pandemic prognosis: Where does it go from here?
Legarda: Ending Violence Against Women, a cause for all
Smart offers wireless fiber-like speeds to Filipino homes with country’s first 5G Prepaid Home WiFi
This new condo in the South will make you want to turn a new leaf
Google won’t accept election ads for 2022 national polls
House OKs bill allowing married women to retain maiden surname
MOST READ
Bongbong Marcos to face another disqualification case
Christine Bersola, Julius Babao cleared of cancer after colonoscopy, endoscopy
Former PM Abe says Japan, US could not stand by if China attacked Taiwan
Pacquiao showers cash to 4,000 people in 2-day sortie in Agusan
Don't miss out on the latest news and information.