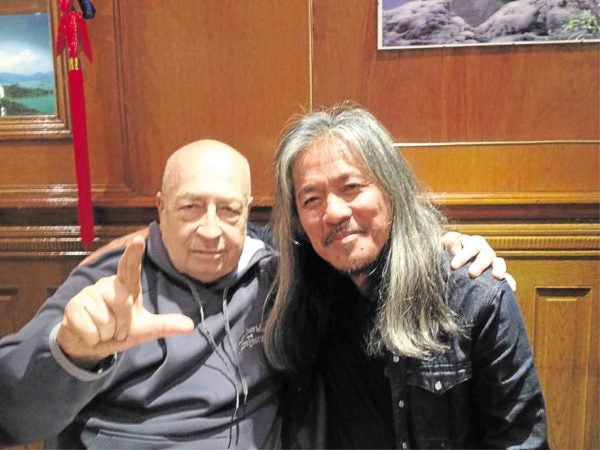 At the Belgium Cinematheque in 2015: Pierre Rissient (left) and Lav Diaz

It seems poetic that producer-publicist/critic-cineaste/auteur Pierre Rissient has chosen to take his final bow two days before the start of this year’s Cannes Film Festival.

Quite fittingly, Rissient’s 1981 film, “Five and the Skin,” billed as a French-Filipino production, was restored and will be shown in the Cannes Classics section on May 14. Organizers dedicated the fest’s 71st edition to the renowned “cinephile.”

The Frenchman, 81 at the time of his demise, gained fame (and notoriety) for championing such varied directors as Clint Eastwood, Jane Campion, Quentin Tarantino, Abbas Kiarostami, Francis Ford Coppola, to name a few. Add to this illustrious list, Filipino filmmaker Lino Brocka.

Rissient is largely credited for “discovering” Brocka and bringing Philippine cinema to the French Riviera. In 1978, he made it possible for Brocka’s “Insiang,” to be screened in Cannes, where lead star Hilda Koronel drew raves from the press covering the glitzy event.

Koronel expressed sorrow upon hearing of Rissient’s passing last May 6. “He was an avid admirer of Lino’s work. This is sad news, indeed.”

The award-winning actress, who is now based in the United States, told the Inquirer via Facebook Messenger: “Pierre took Lino and me to a five-star restaurant upon our arrival in Cannes.”

She could no longer recall the exact name of the posh place, but would never forget Rissient’s playful nature. “He made us eat something but firmly told us not to ask what it was.”

Only after the meal did he reveal the main ingredient of the dish: It was rabbit stew. “I loved rabbits! I had two pet rabbits in the old days,” she exclaimed. “Lino and I gasped: ‘Oh, no! We ate those cute, furry creatures!’ But I must admit it was delicious! Of course, for the French it was no big deal. Just like escargot (snail). But rabbits? They are my pets!” 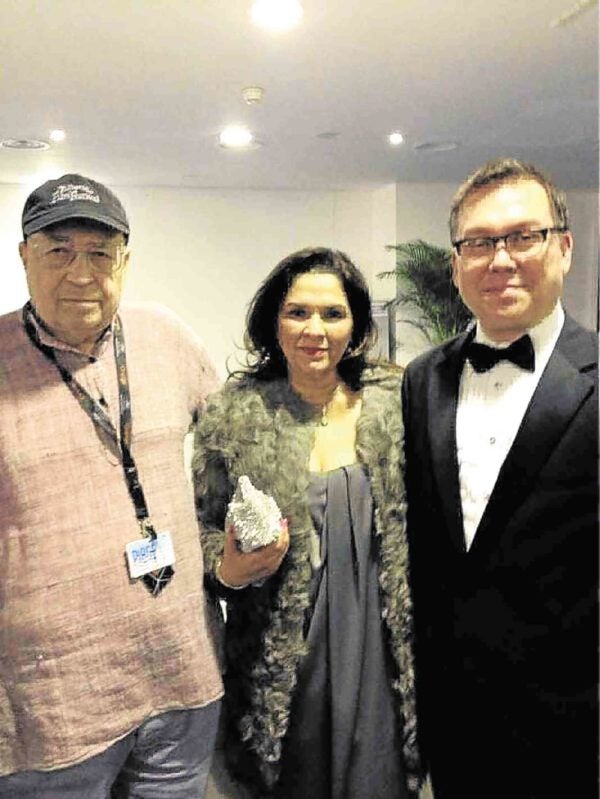 Five years ago, Koronel returned to the Cannes red carpet for the premiere of Brocka’s restored masterpiece, “Maynila sa mga Kuko ng Liwanag,” and got to reunite briefly with Rissient.

Two years later, another dream of Rissient was fulfilled when Brocka’s “Insiang” was also restored and showcased in the Cannes Classics section.

Last time Rissient traveled to Manila was for the local premiere of the restored “Insiang” in 2015.

“He was a true friend to Asian cinema, but his heart was always with the Philippines,” said filmmaker Briccio Santos, former chair of the Film Development Council of the Philippines. “Last November, I visited him in Paris and met him at a café near his apartment. I saw him holding court, with young Asian filmmakers, giving them pointers after asking them questions about their film intentions.”

In an exclusive interview held in Paris, France, in 2008, Rissient told the Inquirer that he had been working to get Brocka’s films—particularly, “Insiang” and “Jaguar”—restored and reshown in the world’s most prestigious film festival.

He recalled that he had stumbled on “Brocka and Philippine cinema by chance.” “By accident,” he quipped. Rissient described Brocka as “very temperamental, full of passion, vibrant, spontaneous. He had a quick mind.”

In the great debate between competing filmmakers Brocka and Ishmael Bernal, Rissient remarked: “Why not be for both?”

Pressed to make a choice, he conceded: “For my generation, Bernal was No. 2. But he was very talented, too. I think Brocka became more renowned internationally not just because of my reaction, but because of the reactions of many people. Also, Brocka was more political than Bernal.”

He had a favorite Bernal film, though, and some homegrown critics might find it surprising. “It was not ‘Nunal sa Tubig,’ but a small film called ‘Aliw.’ It’s a lovely film, full of tenderness.”

He had a theory on why the French found Brocka’s filmography so fascinating. “His films are universal. It has nothing to do with being French or Filipino.”

Brocka made films “with enormous passion,” Rissient explained. “A story is a story. But it’s passion that drives the character … the emotion. His films are boiling.”

At the time of the 2008 interview, Rissient was also keeping tabs on the new generation of Filipino filmmakers and was familiar with the films of Jeffrey Jeturian, Chito Roño, Brillante Ma Mendoza and Lav Diaz.

When they saw each other in 2016 and 2017, Rissient kept prodding Diaz to adapt Carlos Bulosan’s “America Is in the Heart.” “He said that he would talk to a producer to finance it.” Diaz’s busy schedule, however, got in the way.

Rissient also told Diaz about several important documents and materials from Brocka that were in his possession. “He was ready to return them to the Philippines,” Diaz related.

As his parting shot in the 2008 Inquirer interview, Rissient relayed this advice to young Filipino filmmakers: “Do what you feel you want to do. Hopefully, you’ll get the money for it.”