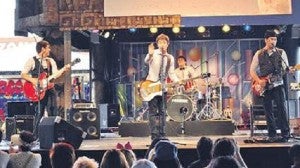 What’s in a name? A lot—in fact, it means everything, particularly in this case involving two bands, The Bloomfields and The Bloom Brothers.

The Bloomfields first caught public attention when it opened for the Gary Lewis concert at the Big Dome in 2007. The band was originally composed of brothers Jayjay and Pepe Lozano (guitars, vocals), Lakan Hila (keyboards), Louie Poco (bass) and Rocky Collado (drums).

The band became popular because its members were young and yet its repertoire consisted mostly of 1960s rock and pop classics. It was always booked for club and corporate gigs. The members were pretty tight, having been school buddies (they all finished high school at La Salle Green Hills). They decided to formally register The Bloomfields as a corporation.

Everything was dandy until the Lozanos quit the band, and later resigned from the corporation. One of the reasons, Jayjay told the Inquirer in an interview two years ago, was musical differences.

Jayjay and Pepe formed another band with their youngest brother, JC, plus Enrico Parulan (bass) and Sandy Baliong (drums). They called their group The Bloom Brothers.

The Bloomfields added Dino Pascual (rhythm guitar) to its lineup and retained the name.

Wouldn’t it cause confusion? the Inquirer asked Jayjay in that same interview, since there would be two bands using “Bloom” in their names? What’s so special about that word?

Jayjay explained that it was he who first thought of using the word Bloom for the original group, so he saw nothing wrong about using it for his new one.

Confusion, indeed, set in. Promoters would reportedly book The Bloomfields for shows and end up getting The Bloom Brothers. Or vice versa.

The good news for The Bloomfields is, the Intellectual Property Office of the Philippines has ruled that The Bloom Brothers cannot use its current name, or anything that has the word “bloom” in it.

In a decision last year, the IPOP rejected the application for a trademark of the name Bloom Brothers filed on January 7, 2010 by the Lozano brothers’ father, Gregorio. The copyright office cited a list of evidence that The Bloomfields had presented to oppose the application—including a copy of The Bloomfields’ registration as a corporation and the Lozano brothers’ letter of resignation from the corporation.

When the Inquirer spoke to Gregorio by phone on January 9, he said he had not received a copy of the IPOP decision. “But clients and fans have suggested that we should just change our band’s name, once and for all,” he added. “‘It was the late Wyngard Tracy that suggested using ‘The Bloom Brothers.’”

In a recent gig at Salon de Ning of the Manila Peninsula, the group introduced itself as “TBB.”

In a way, the turn of events allows The Bloomfields and TBB to finally put their differences behind and move on.

The two bands crossed paths late last year in Boracay, where they performed in simultaneous gigs. Jayjay related that they all ended up talking like long-lost friends.

In October last year, a gig at Arnel Pineda’s Quezon City club, Rockville, showed The Bloomfields in top shape—with Poco’s wild antics and Collado’s flamboyant skills complementing the band’s spirited covers of Beatles and other ’60s stuff, as well as originals from its “Hit the Ground Running” CD.

At Salon de Ning, TBB regaled the full-house audience with a deep repertoire that took off with The Beatles and Beach Boys, glided with The Alessi Brothers and Doobie Brothers, soared with Steely Dan (we were floored by Pepe Lozano’s razor-sharp guitar riffs) and many more surprise covers, including an APO tune, “Magkayakap sa Dilim,” whose lyrics were elegantly embellished by vocals in four-part harmony.

A note for fans and the just curious alike: While it’s nearly impossible to imagine these two bands jamming for old times’ sake in the near future, it would be great to see them take their careers to the next level—as major recording and performing artists who could, say, pack the Big Dome. In other words, major talents in full bloom.

In a way, the turn of events allows The Bloomfields and TBB to finally put their differences behind and move on.