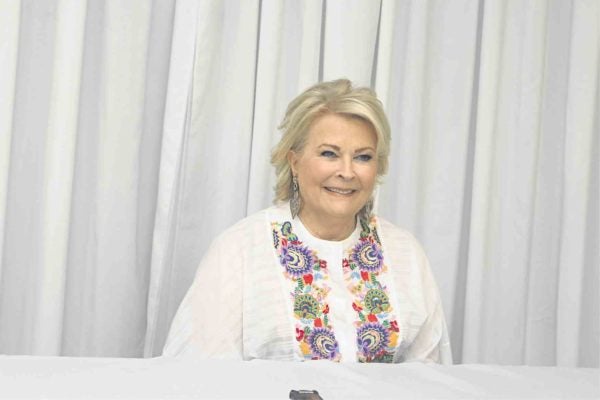 LOS ANGELES—“I can’t even believe I actually passed the 70 mark. I’m just, how did this happen? It’s so shocking,” quipped Candice Bergen, who turned 72 on May 9. The “Murphy Brown” star is back on the big screen with Jane Fonda, Diane Keaton and Mary Steenburgen in the comedy, “Book Club.”

Imagine these four delightful actresses playing lifelong friends who are the only members of their book club. When we first meet the ladies in this fun movie by Bill Holderman, their next book selection is “Fifty Shades of Grey.”

“I’ve never been in a book club myself, but from what I understand, the first priority is drinking wine,” Candice joked with a laugh in our interview at W Westwood Hotel. “But the point of the club is to discuss the book at hand.”

Candice’s Sharon is a divorcée judge who tries dating apps for the first time. “I’ve been married for 18 years, so that would be a no,” the actress replied when asked if she’s had any experience in online dating. She has been married to New York real estate developer, Marshall Rose, since 2000.

The five-time Emmy winner was married to French director Louis Malle until his death in 1995. They have a daughter, Chloe, an editor and author.

The Golden Globe winner and Oscar nominee grew up in Hollywood. Her dad was Edgar Bergen, the famous ventriloquist, while her mom was Frances Bergen, a singer, actress and model.

Candice will return as Murphy Brown in the series’ revival in the 2018-2019 season. 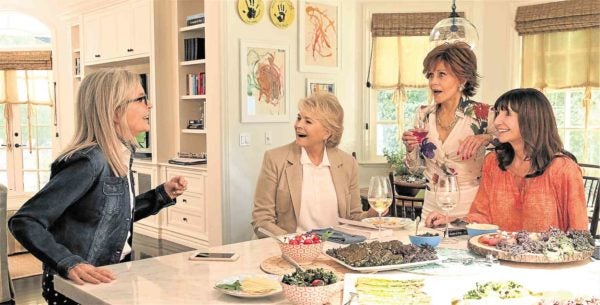 I can imagine that it was a lot of fun for the four of you. Did you know each other before this movie? We all knew each other slightly. I’d known Diane a little better than Jane, and I knew Mary slightly. We loved working with each other, and it was pure pleasure.

Can you talk about how you first met Jane and Diane? I met Jane when I was 17. She came over to my parents’ house with her then boyfriend. Then, I’d see her from time to time at events in LA or New York. But we were never close. Whenever Jane’s around, she’s always hyper present. Nothing misses her attention. It’s really impressive.

I’ve also known Diane, but not as long as Jane. Diane is much more private than I am, but I love and respect Diane. I think that she is, if not a genius, in the state next to genius.

It’s a rare treat to see famous actresses working together. Much less old actresses working with each other, let’s be frank. The studio didn’t want to go with older actresses. They wanted younger, vibrant actresses, but there’s nobody more vibrant than us (laughs).

I’m going to miss these women. We’ve all agreed that we have to keep the friendship going.

In between takes, what did the four of you do? We shot mostly in a house in Brentwood (California). The garage was our green room.

Every time we’d have downtime, we’d go in the garage. Our chairs were set up in a circle, and we’d just yak and yak on just about everything. Anything Jane had to say was pretty interesting (laughs).

When you meet with your own friends, what do you usually discuss? Politics and doctor appointments (laughs). We don’t talk about fashion. We’re a little more substantial than that.

You didn’t read all three? No, one was plenty (laughs).

How did this comedy’s story of lifelong friends resonate with you? This is the first movie that Bill Holderman has ever made. None of us were sure what we were going to get. But he did such a wonderful job. Comedy is a very difficult, delicate thing to put together.

What the movie encourages is, life doesn’t end as soon as we’re programmed to think it does. First of all, value your female friendships. Leave yourself open to possibilities.

Can you talk about working with Richard Dreyfuss? He’s so alive and intelligent, and he’s a great actor. He is wonderful in the movie.

You’re very open about your age, unlike some actors. I’ve given up any pretense, and never did much, of concealing my age. Some friends of mine are very protective about keeping their age a secret, but I don’t understand why, frankly. It’s very out of date. We should feel privileged to grow older. I’m 72, so what’s the big deal?

What are some of the benefits of being a mature woman? As you get older, you get much smarter. I’m 100 percent smarter now than when I was 30 or 40. I feel more vibrant and alert. My age now is the best I’ve ever felt, aside from the fact that I have fake hips.

Is losing your looks ever a concern for you? My parents never focused on my looks. As a result, I have very little vanity, for a woman.
On the set, I never ask to see a mirror. Certainly, I look older. I haven’t had a facelift. I had plastic surgery—I had my eyes done when I was 41. But as you get older, you should also look older.

Who are the women you admire? In 1973, I spent a week in Gombe, Africa, with Jane Goodall. She was a heroine of mine. I couldn’t get access to her camp, so I convinced a woman’s magazine to send me there and send her money. If they hadn’t given her a check, I never would have gotten in.

I knew the author Lillian Hellman a little bit. She was very impressive. And I find Jane Fonda remarkable. She’s just so intelligent. And she cares about people.

And who inspired you? I was around Charlie and Oona Chaplin for a couple of weeks. I was on the plane with him when he flew from New York to LA (Chaplin’s first trip to the US after his exile in Switzerland).

I was with them after the presentation of his honorary Oscar. He said, “They really liked me!” I really valued that time with them.

Can you talk about your first role in “The Group,” which dealt with lesbianism. It was shocking at the time? I was in college when I made that movie. I had just turned 19. My mother was despondent. She said, “Your first role, and you’re playing a lesbian? Couldn’t you start with an ingénue (laughs)?”

Gay sexuality in 1965—we were skittering around the edge of that. We’ve come a long way, but it’s taken a long time.

How is your daughter, Chloe? We live across the park (Central Park, New York) from each other. She lives in my old apartment, where she was born. She was the social editor at Vogue Magazine for five years. Now she’s just a contributing editor at Vogue because she took time off to write a novel.

What a great life you have. And it’s not over (laughs).