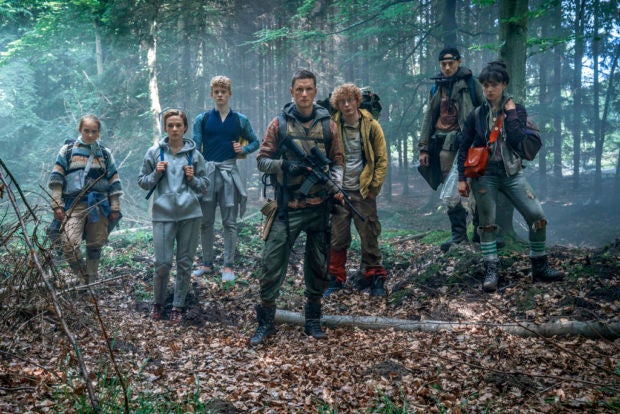 This image released by Netflix shows a scene from the Netflix series, “The Rain,” which follows a Danish sister and her younger brother who are ushered into a bunker by their father and mother as they prepared for a coming storm that brought deadly rains. (Per Arnesen/Netflix via AP)

Post-apocalyptic productions have proliferated in recent years just like the cliches around them. A human-made disaster occurs, survivors turn on each other and audiences go on dark journeys with little hope.

“The Rain,” a new, original young adult series released Friday by Netflix, certainly adopts some of these motifs but it tells the story of an environmental catastrophe through the eyes of Danish teens and other young people in Scandinavia where, unlike the United States, high-powered weapons are a rarity. The expanding threat to humanity involves other countries, making the fear truly a worldwide scare.

The series follows a Danish sister and her younger brother who are ushered into a bunker by their father and mother as they prepare for a coming storm that brought rains that mysteriously cause people to suffer violent deaths. The father, we learn, is a scientist of some kind who knows why the rains are so deadly and abandons the family to find a cure.

There, safe in the high-tech bunker, the children remain for six years until food runs out and they seek to find their father. The sister has become a young woman and the boy morphs into an edgy teen. The water, viewers find out, remains contaminated and the rains still are deadly.

And there are few survivors.

Co-creators Christian Potalivo and Jannik Tai Mosholt said it was important to set this story in Scandinavia to explore the region’s self-perception that the system is always there to pick up those facing hard times. Using the most extreme situation, the series allowed them to peel away “everything we as Scandinavians find as being specifically Scandinavian.”

But Mosholt said the post-apocalyptic drama through the eyes of young people should have appeal to audiences around the world.

“We believe that the core themes and basic questions we’re trying to ask are universal,” Mosholt said. “What is it being human and who are we really? We find these questions to be important in this day and age.”

Potalivo said the creators felt it was important to tell the saga through the eyes of youth because the drama would hit multiple levels.

“We found it interesting to meet these characters in a time of their lives where they’re supposed to find out who they really are, and now have to do this in a world where everything they would normally mirror themselves has been stripped away,” Potalivo said.

“The Rain” is Netflix’s first original, foreign language young adult series. The streaming service says more like it are coming.

For example, later this year, Netflix will release “Baby,” a coming-of-age story that explores the unseen lives of high school students in Rome, Italy. Netflix also will release later this year “Elite” — a series that follows students at an exclusive school in Spain that attracts the children of the privileged and those from working-class homes.

And next year, Netflix will unveil “Quicksand,” a series out of Sweden that is based on the best-selling novel by Malin Persson Giolito. The show is about a mass shooting at a prep school in Stockholm’s wealthiest suburb. MKH

‘Annihilation’: the sci-fi movie women have been waiting for