Entertainment columnist Dolly Anne Carvajal has shared on her social media her view on remaining respectful towards her ex-husband even after the drama of their separation. 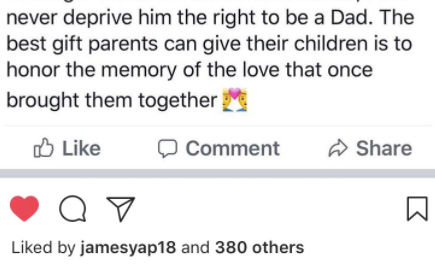 “I don’t badmouth my ex-hubby because once upon a time, I was ‘crazy’ enough to fall for him. It would be absurd to malign someone I chose to marry many love stories ago,” she wrote.

In showbiz, bashing an ex-partner seemed to be common for ex-couples who had turbulent breakups, creating bad blood even after their separation.

For Carvajal, such behavior is unacceptable.

“Bashing an ex is preposterous. If he /she doesn’t have any redeeming qualities, why did you pick him/her to be part of your journey, in the first place?”

Even if their love for each other has died, Carvajal believes her ex-husband should never be an “ex-dad” to their kids.

“Even if he no longer fulfills his fatherhood duties, I will never deprive him the right to be a Dad,” she said.

In the end, she said, “The best gift parents / estranged couples can give their children is to honor the memory of the love that once brought them together.”

Yap has recently made headlines once again when ex-wife Kris Aquino slammed him over his Instagram birthday greeting for their son Bimby Aquino-Yap.

Aquino had blasted Yap’s supposed “half-truths” and “hypocrisy” especially in his relationship with his son.

Citing lack of both personal and financial support, Aquino had unleashed her anger on her ex-husband for his shortcomings.

Aquino’s wrath gained both praises and bashings around the internet, but despite the negativity, she reasoned that she was only fighting for her son. /je