‘The End of the F***ing World’s’ devilishly delightful charm 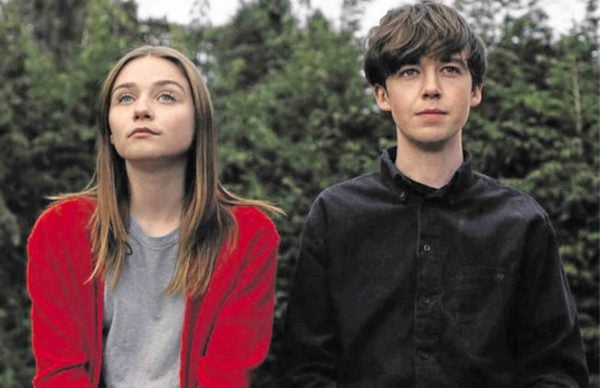 If the profane title doesn’t immediately clue you in, “The End of the F***ing World” is a dark comedy about two angry teens, both dealing with troubling issues that seem specific to their respective lives. Now, imagine them getting together—and all hell breaking loose!

The eight-episode British series streaming on Netflix is decidedly shocking and edgy, centering on those two highly unlikable characters, teenagers with the supposed weight of the world on their shoulders.

And we’re not talking about regular, angst-ridden emo kids. One of them thinks he’s bound to become a serial killer, while the other’s a foul-mouthed, untrusting troublemaker.

Based on the comic book of the same title by Charles Forsman, “The End of the F***ing World” is a difficult show to watch, initially. Both characters narrate their story, detailing just how different they are from most teens. James (Alex Lawther), a lanky kid devoid of emotion and empathy, recalls his history of killing animals, and wants something more of a challenge—executing an actual person.

His would-be victim? A schoolmate, Alyssa (Jessica Barden), the extremely volatile girl who hates fitting in. She reveals an unhappy childhood after being left by a father, and growing up with a docile mother and abusive stepfather.

Things don’t go according to plan, however. James and Alyssa impulsively run away together, the former secretly planning his first murder, while the latter just hoping to enjoy her liberation from an indifferent family.

But when they’re together, as combustible as they are, they both change—after meeting good and bad people during and after a crazy road trip.

The Bonnie-and-Clyde dynamic has its devilishly delightful charm, but it’s seeing both teens’ transformation—a veritable cohesive effort from youthful-looking 20-something English actors Lawther and Barden—that actually makes tuning in worth it.

In James’ “Natural Born Killers”-esque, jump-cut fantasies, he imagines his ultimate goal, which is to snuff out his on-again, off-again girlfriend. But it’s especially unnerving—and rewarding—to finally see him discover his altruistic side.

Just as engrossing is Alyssa’s redemption. They’re not the most congenial of people, and they can be downright repulsive at first, but to be convinced that they’re not utterly despicable at some point is quite a feat to pull off.

“Game of Thrones” actress Gemma Whelan adds a sensitive character to the mix. Her sympathetic cop Eunice Noon sees that redeemable quality in these lawbreaking kids. And the crime aspects of the series can be unsettling, sometimes gory and brutal, but with bonkers, Tarantino-ish humor.

It’s a good thing that each episode runs for only about less than 20 minutes, compressing potentially turgid storylines into a palatable and straightforward unraveling of unpleasant, profanity-laced events—a well-acted story about mercurial misfits who still have universal concerns, after all.