Will Dwayne Johnson run for president? 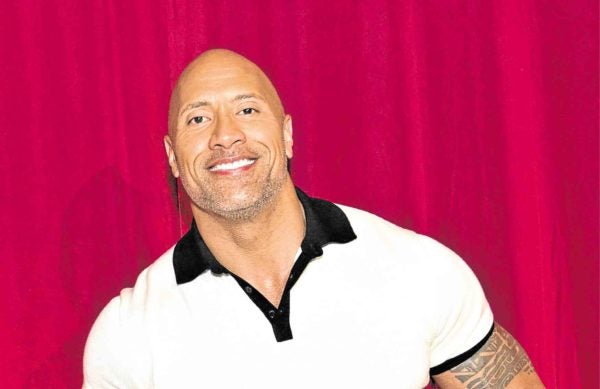 LOS ANGELES—“I’m ready to declare that I care deeply about our country,” Dwayne Johnson laughed, then replied with carefully chosen words in our recent interview. The actor first stirred talk about his potential run for the US presidency in 2020 when he told GQ magazine last year, “I think it’s a real possibility.”

The former wrestling champ added in this chat in The Lot Studios in West Hollywood, “I am also ready to declare that I have no delusional thought process—that running for president can be done at the drop of a hat. Like, look what President Trump did; therefore I could do it. For me, I honestly believe, and I’ve been saying this, that it’s a skill set that you have to sharpen over years and years.

“At least that is my perspective of public service, on local or national level. By the way, it’s incredibly flattering. This interesting groundswell that bubbles little by little, of a good amount of people who want to see me run for president and be president. It’s flattering and I appreciate that.”

Dwayne referred to President Donald Trump without mentioning his name. “I also feel it’s a function of maybe some people who aren’t happy with our current presidential situation. A lot of noise happens. I respect our country and our people. So in that spirit, I continue to listen, learn, take meetings and ask questions. I say, just give me years. I will go to work, then we will see one day.”

In the meantime, the possible presidential contender announced something that’s for certain: “Lauren (Hashian), my longtime girlfriend, and I are getting ready to have another baby in a few weeks.” Their second child will be a girl. They have a daughter, Jasmine, who was born in December 2015.

The California native, considered one of the all-time greatest pro wrestlers, said that fatherhood changed him “to a greater degree. There’s more depth to my values. You’d like to think that as you get older and become more experienced, your core values remain the same. But maybe they evolve a little bit. Evolve and not devolve.

“I still believe in hard work, being grateful, nice and kind to people. Many people have dreams of coming to Hollywood. Well-paid professionals quit their jobs to come here. And young people around the world have these dreams, too. So if you’re fortunate enough to get a break in Hollywood, you got to have a sense of gratitude and humility about the whole thing because it could go away, just like that.”

On Simone, who champions GlobalGirl Media, which is “dedicated to empowering high school-age girls from underserved communities around the world through media, leadership and journalistic training,” the dad said, “We’re proud of our daughter Simone, and the young woman she has blossomed into. We were both so incredibly proud of her to step on that stage as the Golden Globe Ambassador. And it meant a lot to me as a parent because you hope that you do a good job of raising your kids. You can’t control everything.

“I used to have a controlling personality. I grew up an only child, so it was a nice learning curve for me over the years with Simone, to do the best that I could to raise her. You hope that you’re nurturing your kids properly and that they make the right decisions.”

The buff actor’s biceps seemed to burst from his white polo shirt’s short sleeves. “It’s extra small I’m wearing,” he joked with a chuckle. “And there’s great lighting in this room.”

In the action/adventure/sci-fi “Rampage,” Dwayne plays Davis Okoye, a primatologist who helps save the world. A rogue genetic experiment transforms his best friend George, an albino silverback gorilla, into a raging monster. Similarly altered predators go on a path of destruction around the world.

Davis pairs with a genetic engineer to come up with an antidote to stop the rampaging creatures and save his once-gentle ape friend.

Naomie Harris, Jeffrey Dean Morgan, Malin Akerman and Joe Manganiello also star in the Brad Peyton-directed movie that was based on the video game series of the same name.

“What I didn’t anticipate about this movie was the time I was able to spend at the Atlanta Zoo,” Dwayne said about his research for the primatologist role. “That zoo has the largest primate division in the United States. We shot ‘Rampage’ in Atlanta. So we spent time with the gorillas, especially Taz, a silverback, studying their emotions, how they act and respond to certain things.

“We also spent time with folks at the Dian Fossey Gorilla Fund, which works closely with the Atlanta Zoo. So you go into processes, especially with a movie like this, that’s very heavy on visual effects and motion-capture, knowing that you’re going to exercise a skill set or, certainly for me, something that I haven’t used before, in terms of dealing with three gigantic monsters.

Dwayne, who rose from a life of struggles (he and his family were once evicted from their apartment), recently opened up about his depression in his younger years. Reflecting on his success, he said, “I’m proud of the career that I’ve been able to navigate throughout Hollywood, break the mold of a few things, and trailblaze in a few paths. There wasn’t a blueprint for me that I could follow when I first came in. Because there wasn’t a half-Samoan, half-black wrestler who could raise an eyebrow, be loud and bombastic on some crazy wrestling show.

“But when I first broke through 18 years ago, there were individuals like Will Smith and George Clooney at the time—I wanted that kind of career. I’m so proud of the people that I’ve been able to galvanize around me to see the vision and put in a lot of work.

“I switched agencies about eight years ago. We opened the production company and started building that out. I’m smart enough to know that [what] I know is limited. So, I brought in more people who could help me.”

The man who was dealt with one challenge after another, especially in his teens, said he has no regrets. “I used to have some regrets,” the 45-year-old said. “As you’re going along in life, you have ups and downs. When I left wrestling, I was on top of that world. I quietly transitioned away because I wanted to dedicate myself to acting. I felt like I didn’t just want to make action movies. I wanted to do more. I wanted a diverse career. I felt like that would give me longevity. I didn’t want to be around for just five years. I wanted to have a footprint in Hollywood.

“So there was a time, about two to three years into the transition, that I started to question whether I made the right decision or not.

“But I have gotten to a place today where I don’t regret. Even bad stuff leads to something else.”