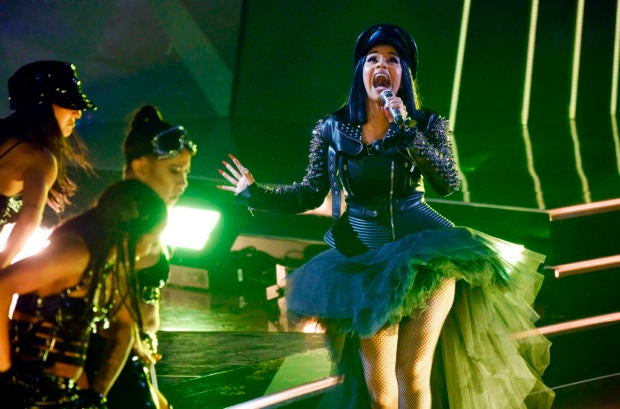 FILE – In this March 11, 2018, file photo, Cardi B performs during the 2018 iHeartRadio Music Awards at The Forum in Inglewood, Calif. Cardi B isn’t just going to sing during her upcoming appearance on “The Tonight Show”, she’ll also be asking questions. The hip-hop will co-host the April 9 show with Jimmy Fallon, interviewing guests in addition to promoting her debut album, “Invasion of Privacy.” (Photo by Chris Pizzello/Invision/AP, File)

NEW YORK  — The anticipation around Cardi B’s debut album has been scorching hot, so when breakthrough artist finally debuted the full album at a party late Thursday, she told the DJ to make sure the sound level was perfect.

“DJ, make it a little loud ’cause I don’t feel it in my bones,” she said after the second track played, while the DJ worked on the sound.

That’s when Cardi B’s silly and likable personality — which has helped her skyrocket on social media and the pop charts — shined brightly. She went into karaoke-mode, singing some of Whitney Houston’s “I Will Always Love You,” even getting the audience of music industry players in New York City to participate.

“Two minutes? What the (heck) I’m supposed to do with two minutes? I’m running out of jokes. I’m running out of entertainment,” she said, then reminding the crowd that she’s performing on “Saturday Night Live” this weekend.
Cardi B, the 25-year-old Bronx rapper, released her major-label debut album, “Invasion of Privacy,” on Friday. It comes 10 months after she dropped “Bodak Yellow (Money Moves),” the ubiquitous rap song that topped Billboard’s Hot 100 chart in October, making her one of three females to top the pop charts with a song last year.

When that Grammy-nominated song came up during the listening, she skipped it: “I know you heard it 1,000 times. I put it on my album because that’s the song that made me rich … That song changed my life.”

The next track, “Be Careful,” was released last week and was met with controversy when an older version of the song by rapper Pardison appeared online. Some of the lyrics were directly used on Cardi B’s song and some wrote that she stole the song, though Pardison was listed as a co-writer on the track.

“I don’t know where Pardison is at, but Pardison is a big part of the song. You know, I heard the record and I was like, ‘…I want that record for me. So, you know, I flipped it and I made it into a girl version,” she said.

Thursday’s event was tightly packed, as attendees bumped shoulder to shoulder while dancing to Cardi B’s new songs and drinking out of large red cups. The scene outside was similar as people waited in the cold to get inside the white-hot event, met with the heavy smell of marijuana as the door opened as some entered.

Bartenders and waitresses at Common Ground mimicked Cardi B’s style: They dressed in the short, green wig and black-and-white plaid shirt Cardi B sports on her new album cover.

“Isn’t it funny? This is the spot I first met my man at,” said Cardi B, referring to her fiance Offset of the multi-platinum rap trio Migos.

“Thank you everybody for coming out. I worked so hard on this album … This music industry (stuff) is a roller coaster, an emotional roller coaster. It’s more crazier than the streets,” she said.

“Invasion of Privacy” also includes the hit “Bartier Cardi,” while Chance the Rapper, SZA, J. Balvin, Bad Bunny, Kehlani and YG make guest appearances. Cardi B, who developed a following on social media after stripping and appeared on the reality show “Love and Hip Hop,” has also had major success with the songs “Finesse” with Bruno Mars, “No Limit” with G-Eazy,” and MotorSport” with Migos and Nicki Minaj.

“In barely a year this woman has broken so many records. This girl has so many Hot 100 (hits) … She’s worked her (butt) off,” said Julie Greenwald, the chairman and COO of Atlantic Records, home to Ed Sheeran, Missy Elliott, Kelly Clarkson, Coldplay and Sia.

“We are so proud of this album,” she added before calling Cardi B “the first lady of Atlantic Records.” MKH