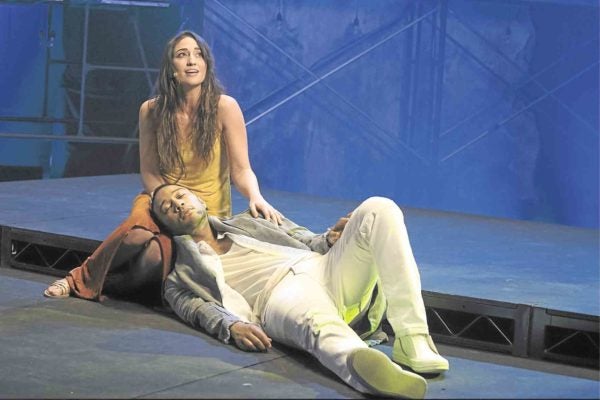 NEW YORK—Strep. Ugh. I woke up early on Saturday morning with a throat severely sore that it hurt to swallow. Even drinking water was laborious, and chicken broth, even worse. However, I did make a trip to my ENT, Dr. Linda Dahl, who took a look at my throat and started me on a regimen of medication (she also checked on my vocal cords and, thank goodness, they were unscathed). It’s now late Monday night as I write this, and I was able to return to the show earlier tonight.

So, what is one to do while recovering at home? Since it happened to be Easter weekend, on Sunday night we tuned in to the live telecast of “Jesus Christ Superstar,” starring John Legend as Jesus, Sara Bareilles as Mary Magdalene and Brandon Victor Dixon as Judas. In supporting roles were Norm Lewis as Caiaphas, Jin Ha as Annas, Ben Daniels as Pilate, Jason Tam as Peter, Erik Grönwall as Simon Zealotes and in a glorified cameo, Alice Cooper as Herod. The ensemble was made up of veterans of various Broadway shows. On quite a few guitar solos was Brandon Niederauer as well as a full-on live orchestra.

“Jesus Christ Superstar” is not unfamiliar territory to many of us who are Broadway fans. Written by Tim Rice and Andrew Lloyd Webber, the musical began as a concept album released in 1970, made it to Broadway in 1971, and turned into a film starring Ted Neeley as Jesus, Carl Anderson as Judas and Yvonne Elliman as Mary Magdalene. Without a doubt, especially during the Lenten season, “JCS” is viewed as part of one’s devotion to the passion of Christ.

The live concert event that aired on Sunday was my equivalent of Easter Mass, a remembrance and celebration of the passion, death and resurrection of Christ. That said, I also sat and enjoyed it as a fan of the show and a curious spectator, wondering how this musical would fare, after “Peter Pan,” “The Sound of Music,” “The Wiz,” “Hairspray” and “Grease.”

Allow me to say that with each musical that was aired, presentation and execution improved by leaps and bounds, and JCS was the best it’s been. The camera work, lighting and sound were exquisite, direction tight and focused (save for maybe one misstep, I never once felt I had to work hard to figure out what was going on), and the production value top-notch. The very last shot before the curtain call, seeing the crucified Christ recede into a cross-shaped space on the wall filled with light was effective and emotional in its simplicity. It reduced this viewer into a weepy mess.

As for the performances, there was no question about the sincerity of the leads. Both John Legend as Jesus and Brandon Victor Dixon as Judas were at their most effective as actors and singers in moments of reflective contemplation (“Gethsemane”), or when Judas is in self-conflict as he bargains with the high priests (“Damned for All Time/Blood Money”). Perhaps Dixon, given his experience on Broadway (he’s a Tony nominee for “Shuffle Along” and recently played Aaron Burr in “Hamilton”) fared better vocally, while Legend at times sounded fatigued. Sara Bareilles’ vocals hit the bull’s eye with her simple yet clarion delivery of the show’s breakout hit “I Don’t Know How to Love Him,” possessing a sweet honesty that brings one to tears.

As large as the names above loom, the night’s scene-stealers were the featured players. Norm Lewis, fresh from playing Agwe in “Once on This Island,” was a standout as Caiaphas, as was Jin Ha, most recently as Song Liling in the revival of “M. Butterfly.” Sporting full beards and killer coats (plus in Norm’s case, serious corn rows), their vocals were stellar and their storytelling crystal clear, with enough swagger to fill the cavernous Marcy Armory in Brooklyn, the musical’s venue for the night.

Jason Tam as Peter, with only a few solo lines in the show, was able to fill the space with the pain Peter must’ve felt while denying Christ. Ben Daniels as Pilate, with serious acting chops, turned in a portrayal that was layered and vulnerable, and Erik Grönwall as Simon Zealotes made me jump out of my chair.

Kudos too to that entire hardworking ensemble! Additional congratulations to choreographer Camille A. Brown (she was also our choreographer for “Once on This Island”) for your brilliant work!

“Jesus Christ Superstar” was, for whatever flaws it might have possessed, a triumph for musical theater as a genre. The work turned in kept the musical from becoming an outdated period piece. It has remained relevant and real in its themes of unchecked fanaticism, the power possessed by religious leaders, and how one man was able to change the world. For someone who grew up Catholic, the show still has power to move the heart and reinforce the belief that yes, He indeed has risen and still has much to teach about the nature of love, messages that many of us may have forgotten.

Here’s hoping you all had a wonderful Easter.