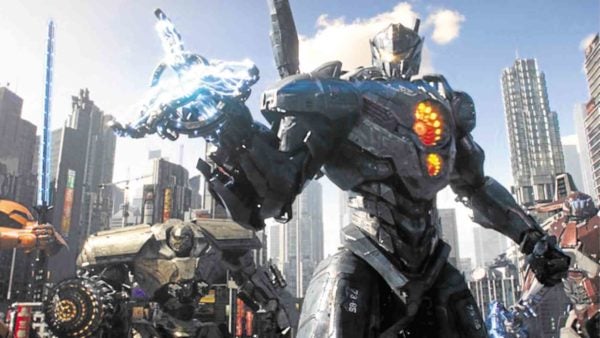 While the sequel “Pacific Rim: Uprising” may not be as intense and entrancing as its 2013 predecessor, the new action-adventure film is a huge, thunderous follow-up that pits colossal robots against Godzilla-esque monsters anew.

With its original stars, Charlie Hunnam and Idris Elba gone, and Guillermo del Toro eschewing directing and writing duties for producing, “Uprising” has mighty big shoes to fill—but fill them, the newbies do, although it just doesn’t have the same power and cohesive feel as before.

A decade after the first film, the world is safe from the gigantic Kaiju monsters that rise from a dimensional rift beneath the Pacific Ocean, thanks to the Jaeger robots, which are piloted by two or more telepathically bonded humans. Owning a motion-controlled robot is now something of a craze, which has resulted in the scavenging of Jaeger parts by enterprising thieves.

Two of them momentously cross paths: Jake Pentecost (John Boyega), son of a deceased war hero (Elba); and Amara Namani (Cailee Spaeny), a teen inventor who assembled her own mini-Jaeger.

Scott Eastwood is one of the new cast members.

There are interesting twists in “Uprising” that keep things fresh and unpredictable at first, including the introduction of rogue Jaegers, as well as the mystery of their origins. One of the original combatants, Mako (Rinko Kikuchi) returns, but with a smaller role this time. The current primary pilots are Jake and Nate (Scott Eastwood), who work well as a tandem. Boyega and Eastwood are functional, despite not having the captivating charisma as the actors before them.

Still, the Steven S. DeKnight film acknowledges that it just isn’t the same anymore, and focuses instead on legacy, on handing the reins to the next generation. With a younger pack of trainees joining the fray, and a diverse cast that embodies a more united world, the sequel has accessible drama—but the real draw is still the stunning action, monumental fisticuffs between towering titans of the mechanical and monstrous kind.

It does get corny from time to time: Jake and Nate figure in a weird, inconsequential love triangle with the mechanic Jules (Adria Arjona). And Amara, trying to fit in as the new recruit, often causes or attracts trouble, but luckily lands on her feet. It gets boring.

The comical “mad” scientists, Gottleib and Geiszler, played again by Burn Gorman and Charlie Day, respectively, add a lighter touch to the proceedings, despite their characters bordering on the cartoony.

It’s a big, blustering, behemoth of a film, regardless, but the human stories are intact, steadily kept from getting lost in its enormity. It’s still mainly about “canceling the apocalypse,” and while it isn’t as spectacular as the original movie, it still adequately satisfies with controlled, cathartic chaos.