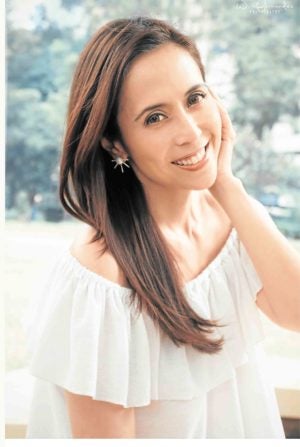 Rachel Alejandro recently made a big splash as the cover girl of FHM (March issue). The 40-something stunner became a poster girl for sexiness at any age. She shrugs off her bashers’ comments.

“People are entitled to their opinions, and I do not take it personally if they feel that someone my age isn’t young enough to be considered attractive or sexy,” Rachel points out. “I prefer the way I look today than 20 years ago. I also feel mentally sharper and more capable as an artist now. It’s too bad that in Philippine show business, we’re age-obsessed and tend to give the best projects to the young. We don’t put as much value to excellence built over time.”

A truly versatile lady, Rachel can breathe life into any role, whether it’s a mousy spinster like Paula in her award-winning film “Ang Larawan” (currently touring in schools nationwide), or a “diva of divas” like the Lady of the Lake character in Upstart Productions’ “Monty Python’s Spamalot,” which is having a repeat run at BGC Arts Center from April 13 to 22.

Having fun keeps Rachel happy and fit. Her fountain of youth? Proper nutrition, regular exercise, adequate sleep and … a zest for life.

“Our mindset can also play a factor in staying young,” says Rachel. “One of my mottos is, ‘No day but today.’ I work hard, but I play hard, too. We should never delay having fun. Have fun now—whatever that means to you, and every day as much as you can, while you still can.” Attagirl!

Isay Alvarez is more than proud of her “theater goddaughter” Aicelle Santos, who has been tapped to portray Gigi in the UK tour of “Miss Saigon.” It’s the same role that Isay originated many curtain calls ago.

Her advice to Aicelle: “Enjoy the experience and the culture. Take dance classes, like I did, to develop more confidence to dance with her British costars, who come from different performing arts schools.”

As for her memorable “Miss Saigon” experience, Isay shares, “My husband, Robert (Seña), was still courting me back then. So, he would put flowers in the cart I pushed onstage during the Bangkok scene. That made me blush!” Those “Miss S” days eventually turned Isay into “Mrs S (Seña).”

The network formerly known as TV5 is now simply called 5. Its power lies in its five synergistic pillars: ESPN5 is the home of major sports events. News5, led by Luchi Cruz-Valdes, continues to live up to its promise of “Higit sa balita, aksyon.” On5 is the pioneer of localized international content. D5Studio’s stories about the Filipino youth is geared for millennial viewers. And Studio 5 levels up the content-creation game with its quality productions.