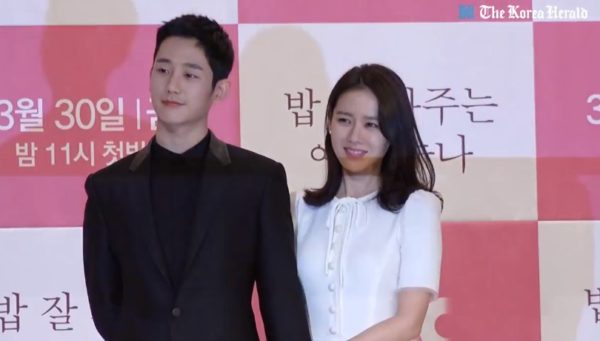 Based on the idea that one’s love life can be more important than a foreign war, JTBC’s new drama “Something in the Rain” hopes to portray the beauty of ordinary yet real love.

Actress Son Ye-jin and actor Jung Hae-in take the lead roles in the new Friday-Saturday drama series. Son’s character, who works as a coffee franchise supervisor, falls for her friend’s younger brother, a character designer at a computer game company, played by Jung.

Producer Ahn Pan-seok directs the production. He is known for staging the legendary hit series “Behind the White Tower“ and the new drama’s unique Korean title “Pretty Sister who Treats Me to Meals” gained the public’s interest from the start of production.

“I saw the phrase on the internet once. I thought it was funny. It stayed in my memory,” director Ahn said, at a press conference which took place Wednesday afternoon in western Seoul. “There are many drama titles that are ambiguous and vague. I wanted to do a drama with a title that is specific and easy to remember.”

The story hopes to depict ordinary yet real love, showing what it is like for two people who have known each other for a long time to fall in love.

“I wondered what real dating could be. It is knowing about one’s real charms, as the knowledge requires an enormous amount of observation,” he said. “Real love could be defined as writing a biography of each other.”

In the drama, there won’t be any epic conflicts or hardships. The plot will calmly describe the lead couple’s love story.

“For a person in love, a call from the lover matters more than a war overseas,” the producer said. “Ordinary love can be epic through its presence.”

Son, who is returning to the small screen for the first time in five years, chose the drama based on her trust of the director. She always wanted to work with Ahn as many of her colleagues have complimented him.

“I was worried at first about doing a drama, as drama productions can be difficult,” Son said. “But when I first met the director, he made a list of what he can do for me on set. I was deeply touched by the action.”

The veteran actress added that she might not be able to work with other drama producers after working with Ahn.

Son‘s goal is to make a well-made drama. “Viewership rating is important, of course. But there are also some dramas that are nice to watch even after 10 years have passed. I would like to make that kind of drama,” she said.