‘Ready Player One’ takes Spielberg back and to the future 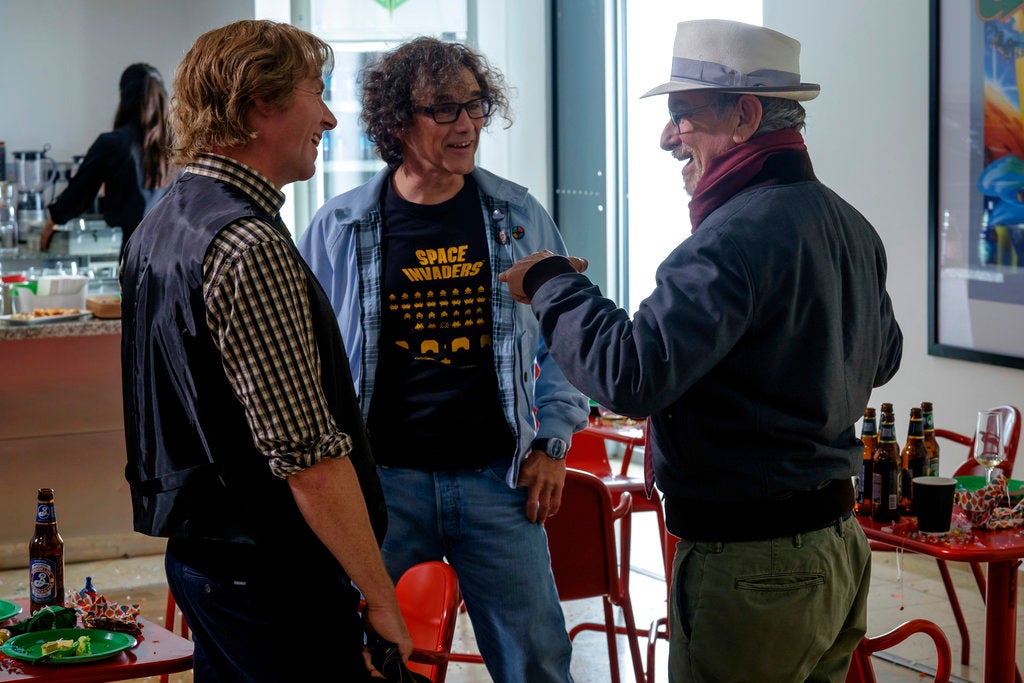 LOS ANGELES — In Ernest Cline’s novel “Ready Player One,” the main character drives a DeLorean because of “Back to the Future,” and uses a grail diary because of “Indiana Jones and the Last Crusade.” The films of Steven Spielberg loom large in the story littered with pop culture references. That the legendary filmmaker then ended up being the one to take Cline’s futuristic-nostalgic vision to the big screen is a small Spielbergian miracle.

“I hadn’t read anything that had triggered my own imagination so vividly where I couldn’t really shut it off,” said Spielberg, who, with “Ready Player One,” out Thursday, returns to the wide-eyed grand-scale blockbuster filmmaking that he made his name with.

The sci-fi spectacle with a reported $175 million production budget presents a near-future vision of a dystopian society that has all but abandoned the real world for an escapist virtual reality existence. In 2045, most people, including the teenage hero Wade (Tye Sheridan), spend their lives as avatars (Wade’s is a cooler version of himself named “Parzival”) in the virtual world of the OASIS — a VR game created by an eccentric genius, James Halliday (Mark Rylance), who has promised his wealth to whomever wins and finds the “Easter egg.”

It’s because of Halliday, who, like its author, came of age in the 1980s, that the OASIS is chalk full of 80s nostalgia from Atari to Buckaroo Banzai. It’s also why Cline assumed that “Ready Player One” would be impossible to adapt. How would anyone be able to secure all the rights?

That it ended up being Spielberg doing the asking helped a little, but producer Kristie Macosko Krieger is the one he credits for getting everything from Chucky to the Iron Giant in the film. She spent three years working with Warner Bros. to obtain all the necessary clearances from various studios. Some they didn’t use, like the main “Star Wars” icons (although you may spot an X-Wing or R2-D2 in a few frames), and some Spielberg just nixed himself, like the mothership from “Close Encounters of the Third Kind.” He didn’t want too many of his old movies in his new movie.

“There comes a point when I would have just had to defer to someone else who likes my movies and not make a movie about my movies,” Spielberg said.

It meant co-screenwriter Zak Penn would have to lose a few of his Spielberg-inspired jokes and ideas that he’d written into the script before Spielberg signed on to direct, but he didn’t mind.

“It would have taken you out of the narrative. He’s too iconic a director,” Penn said. “You’d be sitting there thinking, ‘Oh, this is from a Spielberg film.'”

But everything was on the table, from the song Cline walked down the aisle to (the Hall & Oats song “You Make My Dreams,” which plays during the credits) to a blink-and-you’ll-miss-it nod to “Last Action Hero,” Penn’s first movie which he had wanted Spielberg to direct. Penn, for his part, had said “no” to a proposed reference and was surprised when he saw one in the final cut. Cline had gone behind his back to persuade the folks at ILM to do it.

Most of the references amount to set-dressing, packing every frame in the OASIS with eggs that would take even the most eagle-eyed viewer multiple viewings to catch.

“My philosophy from the very beginning was, the story is out the front windshield and the pop culture references are out the side mirror,” Spielberg said. “And it’s your choice what you would like to look at.”

The production used cutting-edge technology to simulate the OASIS for the cast and crew with VR headsets that would give everyone a 360-degree view of what the virtual world looked like. And the film itself is a mash-up of past and present technologies, including motion capture, computer animation and even film stock, which Spielberg used to shoot the live-action sequences.

“It was just a small little touch because I’m trying to keep, you know film, meaning the chemical, the chemistry of film, relevant and I’m just trying, until they close the last lab and stop making raw stock, to shoot everything I can on film,” Spielberg said. “It also gave the real world a more gritty flavor because when you shoot digitally, it’s much more like acrylic. And film is more like oil. You get that blend between that world of oil and the texture that an oil painting has with the film and you get the very smooth, almost antiseptic clarity of what the digital world looks like.”

Lena Waithe, who plays the tech-savvy Aech, said, “I love that he did that. The movie really represents where cinema is going and where it all began, which is really beautiful.”

Cline’s novel has already proved prophetic in the digital space. He says companies like Oculus and Google have copies on hand and, he’s been told, give them to people who come through the offices. And he thinks the movie, which will play globally, will have a more significant impact.

“The best thing that could ever happen to a science fiction writer is to write something that helps inspire the people who make it into a reality,” Cline said. “This movie could be a self-fulfilling prophecy.”

The OASIS, essentially, is not that distant of a reality. It’s also something of a cautionary tale about the perils of VR, or as, Spielberg said how, “too much of a good thing is too much.”

Whether or not audiences will flock to theaters to soak up the nostalgia and the visionary tech is a big question. Waithe said the film is a feel-good escape, and Sheridan stresses that it’s a, “great metaphor for the world that we live in in 2018 and the balancing act from your digital profile to your real world self.” Early tracking pegs the film, which has received strong reviews, for a $45 million opening. Spielberg might not have lost his touch, but mass audiences might also be too distracted to notice.

As for Cline, he still can’t believe his luck.

“I tell people I’m just prepared for it to all be downhill from here. What could ever top this? I’m so lucky, I got to work with one of my heroes on a story that he helped inspire,” Cline said. “I’m just ready for the slow fade after this.”       /muf