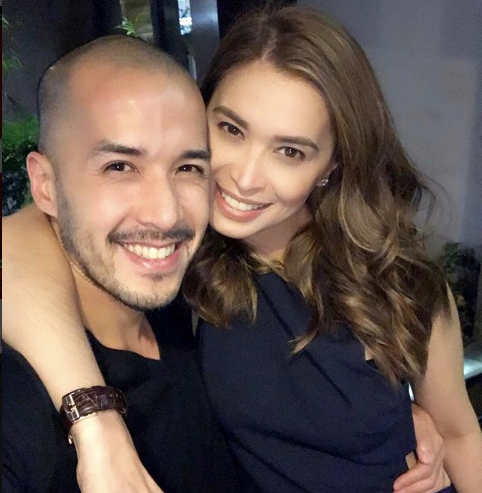 He may not be the biological father to her three children, but Sunshine Cruz will do anything to have boyfriend Macky Mathay’s back.

Previously, the actress shared her daughters’ joyous occasion at their respective moving up ceremonies at the De La Salle Santiago Zobel School in Muntinlupa City Sunday. The eldest, Angelina, will go up to senior high school; the youngest, Chesca, will now attend junior high. Both ceremonies were attended by her businessman boyfriend.

While it was supposed to be a happy affair for the family, some netizens could not help but stir in drama. First, some netizens, such as this comment by @dbestmom, got curious as to why their father, Cesar Montano, was not present.

But others pointed to the presence of Mathay in the ceremony. One netizen, @candidjia, opined that it was not necessary for him to be on stage. She added, “Di po magandang tingnan [lalo] na kung wala naman sya sa contribution ng achievements ng girls mo  (It’s not good to look at, especially if he doesn’t have a contribution to the achievements of your girls).”

Cruz did not have to answer her back directly, as another netizen named @allwehavewhyis123 said that maybe the photo was taken after the ceremony, and it was usual to have pictures taken with someone who attended. She also said, “[M]alay natin, may contribution din siya sa mga girls ni Ms @sunshinecruz718 maybe not financially, but sa advice and moral support (Who knows, maybe he has a contribution to the girls of Ms @sunshinecruz718 maybe not financially, but in advice and moral support).” 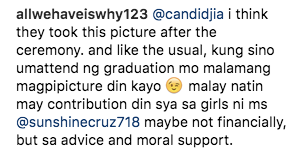 Cruz then thanked the netizen and @candidjia apologized for her previous remark.

As of writing, it is not clear why Montano was not present in both his daughters’ school ceremonies. He and Cruz have been estranged for about five years, and she has sued her ex-husband for marital rape and abuse in 2013. She also filed for the annulment of their marriage in 2014, with the case still pending.

Nevertheless, she said she is better off without Montano and has now moved on with her beau.  /ra