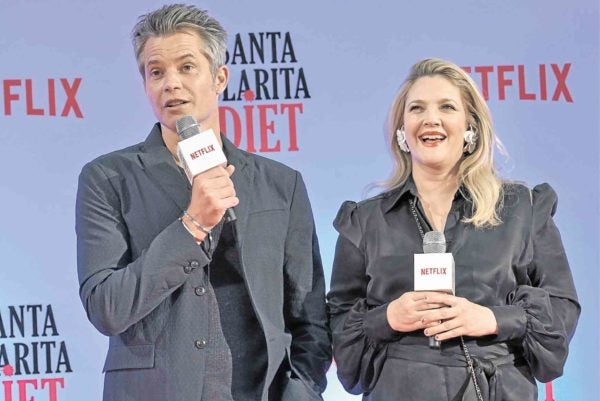 Bad situations bring out the best and worst in people—even in high-profile celebrities like Drew Barrymore and Timothy Olyphant. The Hollywood stars are set to reprise their roles as realtors Joel and Sheila Hammond when the 10-episode second season of Netflix’s “Santa Clarita Diet” begins streaming on March 23.

When we learned that Drew and Timothy were scheduled to visit Manila to promote “Santa Clarita Diet,” it was hard to contain our excitement—because our first “run-in” with the couple in February last year was nothing short of remarkable.

We love telling (and retelling) how our three-on-one interview with Tim, Drew and “Santa Clarita” showrunner Victor Fresco went during a snowstorm in New York last year, because that meeting demonstrated that not all movie stars are “accessible” only when it’s convenient for them.

At the time, our scheduled chat with Dylan Minnette and Katherine Langford (for “13 Reasons Why”) before my meeting with the “Santa Clarita” team was slightly delayed because of bad weather, so we couldn’t run fast enough to meet Drew and Tim thereafter.

But, Drew, Timothy and Victor patiently waited for us in another room at the Edition Hotel and greeted us with so much warmth, which quickly thawed the wintry air. In fact, when we bade them goodbye after the interview, Drew reached for our hand and hugged us.

Drew and Tim were just as warm when we met them again last Monday, this time at the Fairmont in Makati. “Wait … we met in New York last year, right?” Tim beamed as he shook our hand heartily before he sat beside us for this interview.

In New York, Tim disclosed to us that he lived in the Philippines when he was very young. “My dad was with Del Monte at the time,” he said. “My memory of it is vague, but we have photo albums of me and my brothers as infants in Manila.”

So, last Monday, when we asked him what he remembered about his two-year stay in the Philippines in the ’70s, Timothy, a descendant of the Vanderbilts of New York, said he recalled having a Filipino nanny.

“I was only 2 years old when I left Davao and flew to Manila,” he said. “It’s my first time to return to the Philippines after my family relocated to California.” (Drew arrived in Manila on Saturday evening, while Tim flew in the following day. They left the country last Tuesday.)

Drew said that she had always wanted to come back after her quick visit to the country in 2016: “I love the Philippines. I was here two years ago for a beauty trip, because I have a makeup brand called Flower Beauty. So, I met some companies and talked about a possible distribution deal with my company. I’m just mad that I haven’t gotten to see the beaches, because I’d love to see the island life here. It’s supposed to be like paradise.”

But, first things first: Timothy and Drew were here to promote Season 2 of “Santa Clarita Diet,” where they portray a loving couple whose happy family life is upended when Sheila is turned into a human flesh-nibbling and blood-sucking zombie.

Tim said that the series was a lot more fun to do the second time around: “In the first season, it felt like we tonally hit our ‘sweet spot’ at midstride, somewhere around episodes three and four. But, this time around, we hit the ground running.”

“And there’s more energy and synergized teamwork,” Drew interjected. “Tim, Liv (Hewson, who plays the Hammonds’ headstrong daughter, Abby), Skyler (Gisondo, who portrays Liv’s friend, Eric) and I really hit it off. You can always tell if people aren’t getting along, or when they’re merely ‘phoning it in.’ We worked well—from 7 a.m. till 11 at night. That’s why I feel lucky to get this job, because great gigs like this don’t just fall from the sky.” 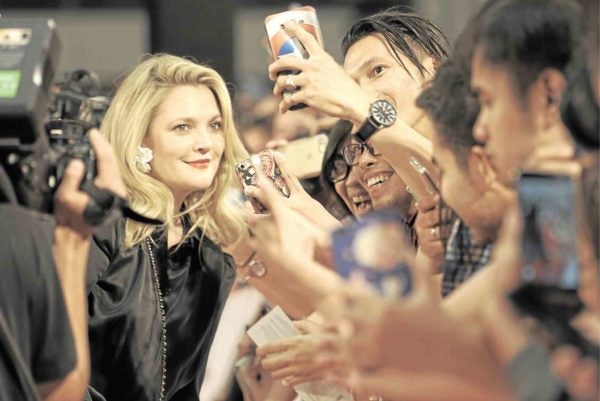 Drew doesn’t just see the show as a fleeting and perfunctory part of the nuts and bolts of her profession as an actress—in fact, when the show was offered to her, she saw it as a form of “feminist rebirth,” especially after hurdling a “rough patch” in her four-year marriage to art consultant Will Kopelman, with whom she has two daughters. (Their divorce was finalized on Aug. 3, 2016.)

Drew explained to us, “‘Santa Clarita Diet’ is about the challenges married people go through. I was at a low point in my life when I read its script, and it made me laugh and feel something. I enjoy telling the story of a married couple who never gives up on each other.

“I like the optimism of a husband and his wife who can make it through [the hard] stuff—I appreciate that. There’s diplomacy in Joel and Sheila’s love for each other, and they continue to find solutions when they find themselves at opposing sides. I don’t want to watch couples fighting on TV, because there’s enough of that in real life, thank you.”

Is Drew talking about her failed marriage?

“Yes. Entering this show after the loss of a marriage that I thought would last forever was certainly a welcome distraction—and a very good plan that worked wonders,” the actress admitted. “I was happy to engage in a show where couples try to make it work, because we all know how difficult marriage is. The last thing I can imagine doing is to sit through a show about divorce—because that’s not how I want to spend my free time, especially after having gone through all that myself.”