There is definitely no rivalry between Kapuso actress Camille Prats and Kapamilya actress Jodi Sta. Maria.

Camille took to Instagram to show her appreciation of her “Ate Joedz,” who congratulated her for her new show, “Ang Forever Ko’y Ikaw,” in GMA-7 even if it would mean competing with Jodi’s “Sana Dalawa ang Puso Ko” in ABS-CBN Channel 2 since it would both be shown on similar time slot.

Camille posted a screenshot of Jodi’s message to her, which reads: “Cams! Congratulations on your new show! May God bless you and everyone involved. Huuugs! Miss you!”

“Ate Joedz! Kinilig ako! Thaaaank you! Miss you and hoping to bump into you soon! It’s been so long!” Camille replied.

Camille captioned her Instagram post: “Best part of my day! Sobrang kinilig ako! Thank you ate @jodistamaria our shows are airing on the same slot and yet so much love for each other. Spreading love and positivity all around!” 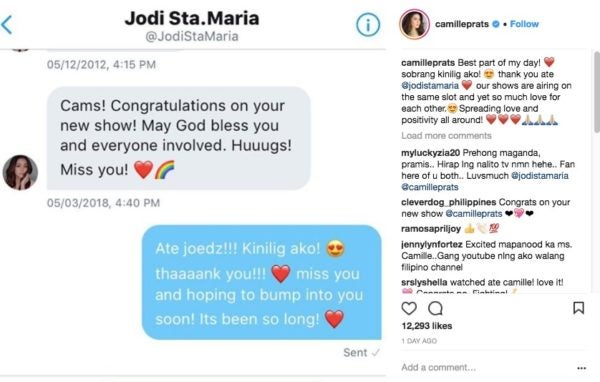 Camille and Jodi both started as talents of ABS-CBN. They were sought-after teen stars in the late ‘90s to the early 2000’s.

Camille eventually moved to the Kapuso network while Jodi stayed with the Kapamilya network, doing projects one after the other.

Incidentally, the story of Camille’s new show is all too familiar for her. In her new late morning soap, she plays a struggling single mother trying to move on from her late husband, and find a new love.

The television drama’s plot was just too close to her since she also had lost her first husband Anthony Linsangan in 2011 due to nasopharynx cancer. Six years later, however, Camille re-married, and now has a new baby with hubby John Yambao.   /kga