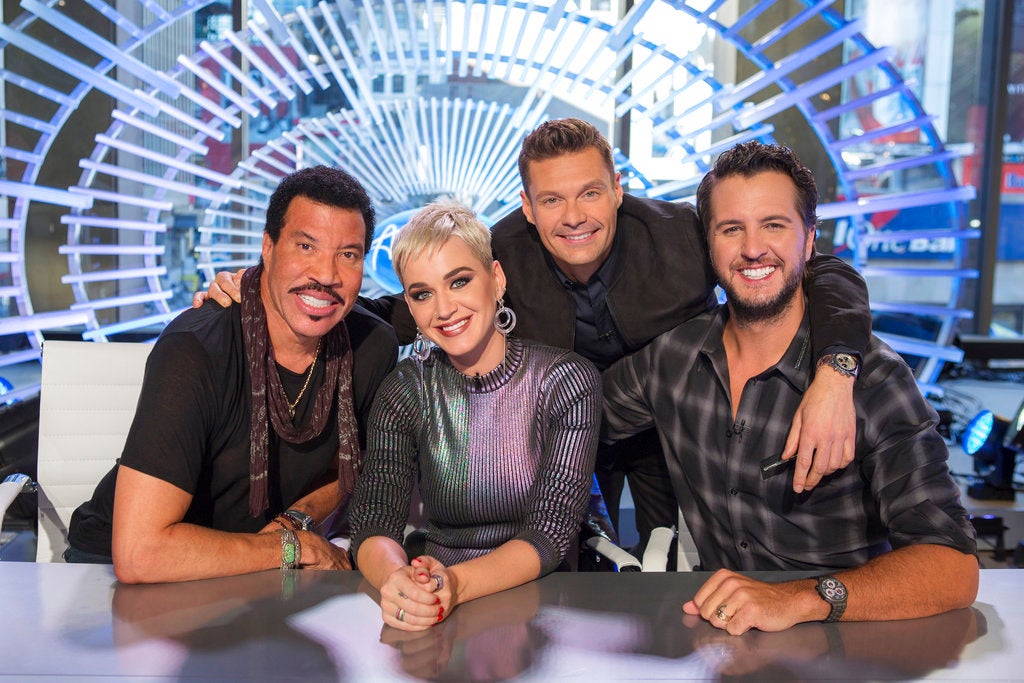 This image released by ABC shows, from left, Lionel Richie, Katy Perry, Ryan Seacrest and Luke Bryan in New York. Richie, Perry and Bryan are the judges on the next season of “American Idol,” premiering March 11 on ABC. AP

“The voices in my head want to sing on ‘American Idol,” a patient confides to his shrink in a 2006 Leo Cullum panel, proof of its cultural imprint.

Two years after the singing contest ended its run on Fox amid dwindling ratings and steep production costs, it’s getting the chance to prove itself again in an ABC version debuting 8 p.m. EST Sunday. In the early episodes, the show is marginally revised and instantly familiar.

This “American Idol” retains the show’s original host, Ryan Seacrest, along with the same logo and production companies. Also intact is the goal of finding a music star — one such as Carrie Underwood, who built a blockbuster career after winning “Idol” in 2005 and whose voice-over opens the ABC show.

The reboot’s early episodes include pre-taped auditions held in cities including New York; Savannah, Georgia; Los Angeles and New Orleans. We see, as before, crowds of would-be contestants eager to prove they have what it takes for a “golden ticket to Hollywood” and next-round tryouts.

“There’s been a lot of talk about how is this show different,” Seacrest said at a news conference with next-generation judges Luke Bryan, Katy Perry and Lionel Richie. “You’ve got three different faces. You have different contestants. But to change the show drastically in terms of format, I think, would be a mistake.”

(The show arrives under a #MeToo shadow for Seacrest. A woman who worked as his wardrobe stylist at E! News nearly a decade ago suggested he engaged in inappropriate behavior, which Seacrest has denied. The E! channel said an investigation found insufficient evidence to support the claims.)

For the judges, the new “American Idol” represents a chance to put their stamp on a job held by a succession of celebrity panelists.

“I think we can inspire people and show people how it’s done too, in our own way,” Bryan told The Associated Press.

Richie said the goal is to find more than a singer: “We are looking for an artist, and that’s going to require our expertise.”

“Some people, they don’t know that there are other lanes in the freeway so it’s not just pop stardom,” she said. “Maybe you’re a Broadway star, maybe you’re in voiceover, maybe you’re gonna do jingles. Maybe you’re a songwriter. … There’s so many different ways to go at it.”

What ABC wants is more predictable: Ratings proof that it made the right decision in reviving “American Idol,” which first debuted in 2002 with judges Paula Abdul, Simon Cowell and Randy Jackson.

It reigned as TV’s No. 1 series for nine years, peaking with 30 million viewers an episode in 2006. By its last season the average audience had dipped to 11 million and skewed older, and NBC’s “The Voice” surpassed it in popularity. In today’s expanded field of cable and streaming options, however, an audience of 11 million would rank it among TV’s top 20 shows.

“‘American Idol’ is a pop-culture staple that left the air too soon,” Channing Dungey, ABC entertainment president, said in announcing the reboot last spring. “ABC is the right home to re-ignite the fan base.”

It was Seacrest who hinted on Fox’s May 2016 finale that there might be more “Idol” to come. “Good night, America. For now,” he said as the screen faded to black after Trent Harmon’s victory over runner-up La’Porsha Renae.

The voting audience had spoken, as they did in season one when Kelly Clarkson prevailed over Justin Guarini. Now it’s “American Idol” hoping once more to be crowned a winner.

Perry believes the timing is right.

“It’s about finding an actual ‘Idol,’ making that good old American dream come to life once again that we all can be inspired by,” she said. “We need those beautiful stories right now to help lift us up, inspire us, and believe in ourselves again.” /cbb