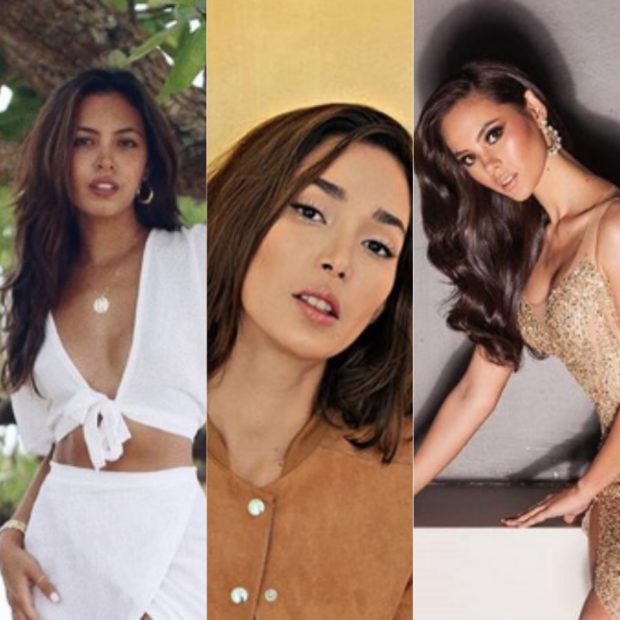 Bea Rose Santiago and Maggie Wilson caused quite a stir when they were accused of body-shaming newly crowned Bb. Pilipinas-Universe Catriona Gray.

It all started when screengrabs of how the two beauty queens reacted when Gray won in the best swimsuit category in the pageant. Their deleted Facebook posts were uploaded by an Instagram account @missesfilipinas yesterday.

In the photo, Wilson, who represented the Philippines in the Miss World pageant in 2007, initially reacted: “Huh? Best in swimsuit? Paano (How)? I mean pretty face but definitely not the best body out there.” 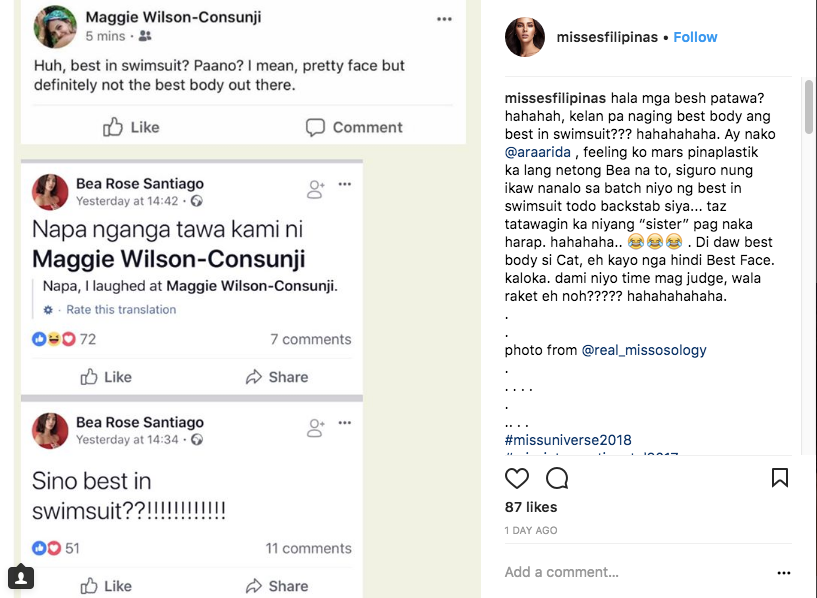 Santiago also took to Twitter to air her opinion, saying “Sinong best in swimsuit (Who’s best in swimsuit)???!!!” She then critiqued, “[I]t should not be all about the face” and rooted for Binibining 14, Samantha Bernardo. 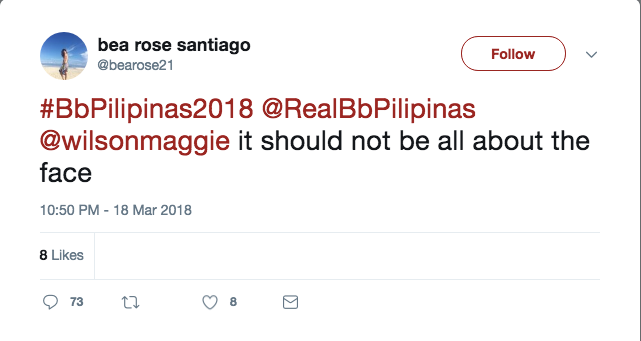 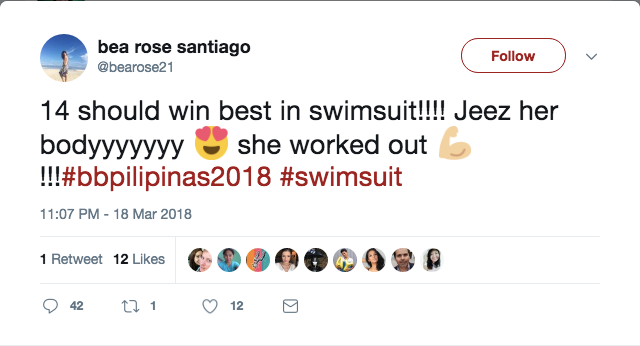 But fans and followers of Gray had none of it. On one of Wilson’s Instagram posts on Sunday, a netizen named @myreingel called out the beauty queen with: “Wala talagang cure sa [p]agiging insecure (There really is no cure for being insecure).” She added that to win best in swimsuit, it is by “how you carry yourself confidently, elegantly, classily in front of the audience [and] judges…” 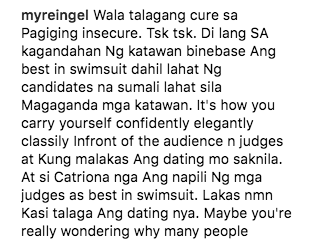 Wilson then replied to the netizen, saying she did not have any ill feeling toward Gray and did not wonder why so many people support her. But staying true to her opinion, she maintained, “I think she deserved her miss universe win just not best in swimsuit. There were other girls that were more deserving.”

In another post by Wilson on Thursday wherein she showed off her new tattoo, netizen @bysstander mocked her by commenting what Santiago said. She replied, “[D]o you know what we’re laughing about?! There was no mention.”

Having enough of all the hate, Wilson posted this Instagram story where she stood her ground about Gray not deserving the award. “I also do think she’s beautiful and deserves her Miss Universe [Philippines’] win for overall performance,” she explained.

She also had this to say to all the bashers leaving nasty comments on her page: “Did you forget that I also wrote that[?] Or did you choose to ignore and neglect to read, screen cap and share that part just so you have a “reason” to hate[?]” 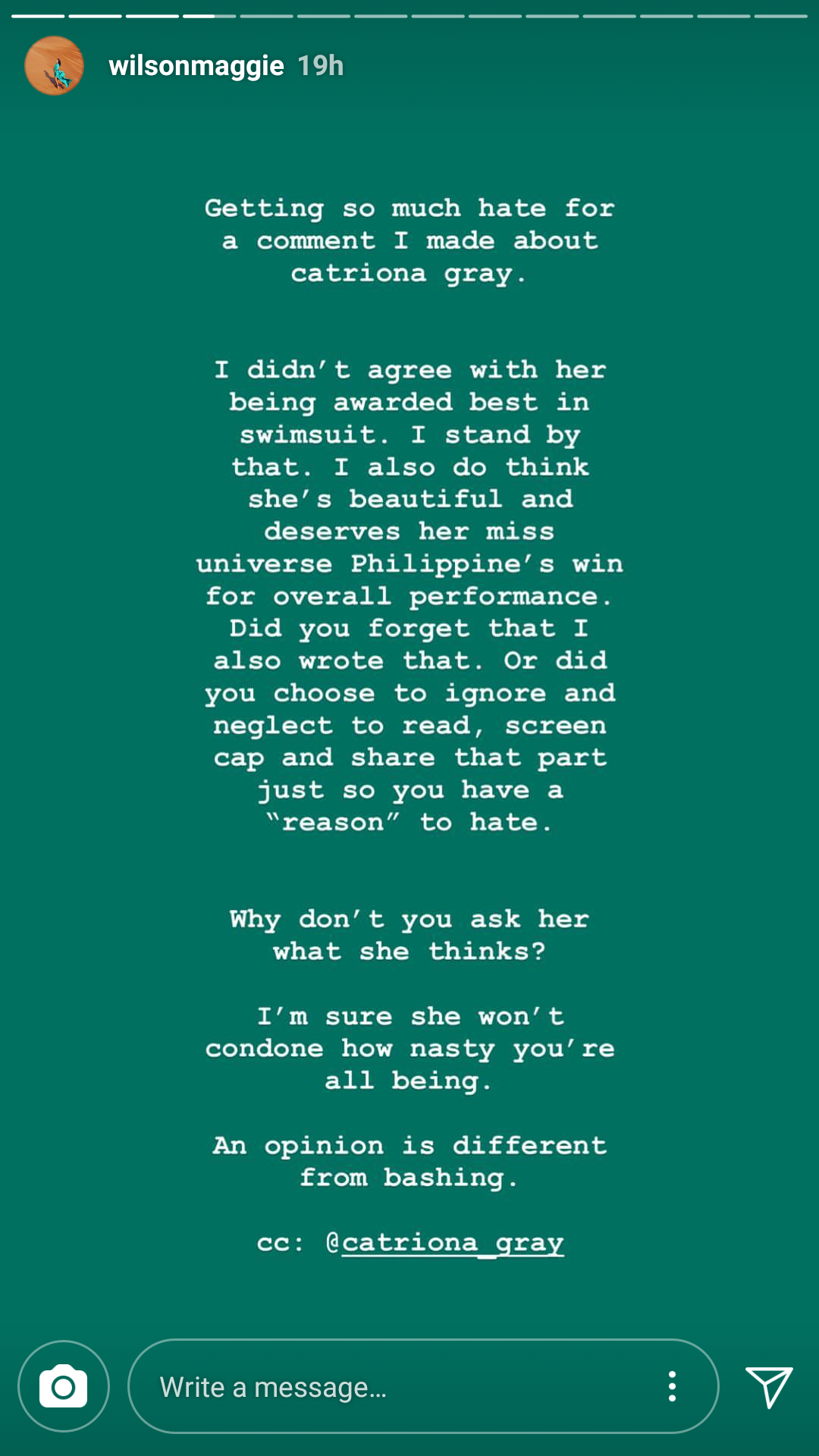 ‘Everyone’s entitled to their own opinion’

Wanting to settle the issue and let all the hate subside , Gray took matters into her hands. She said that “everyone is entitled to their own opinion” and asked to not be “too overly sensitive.”

“As I’ve said before, debating and stating your own opinion is okay but let’s not retaliate with negativity,” the beauty queen urged her followers in an Instagram story. Gray added that even though some say she needs to “control her fans,” she cannot control all their actions. 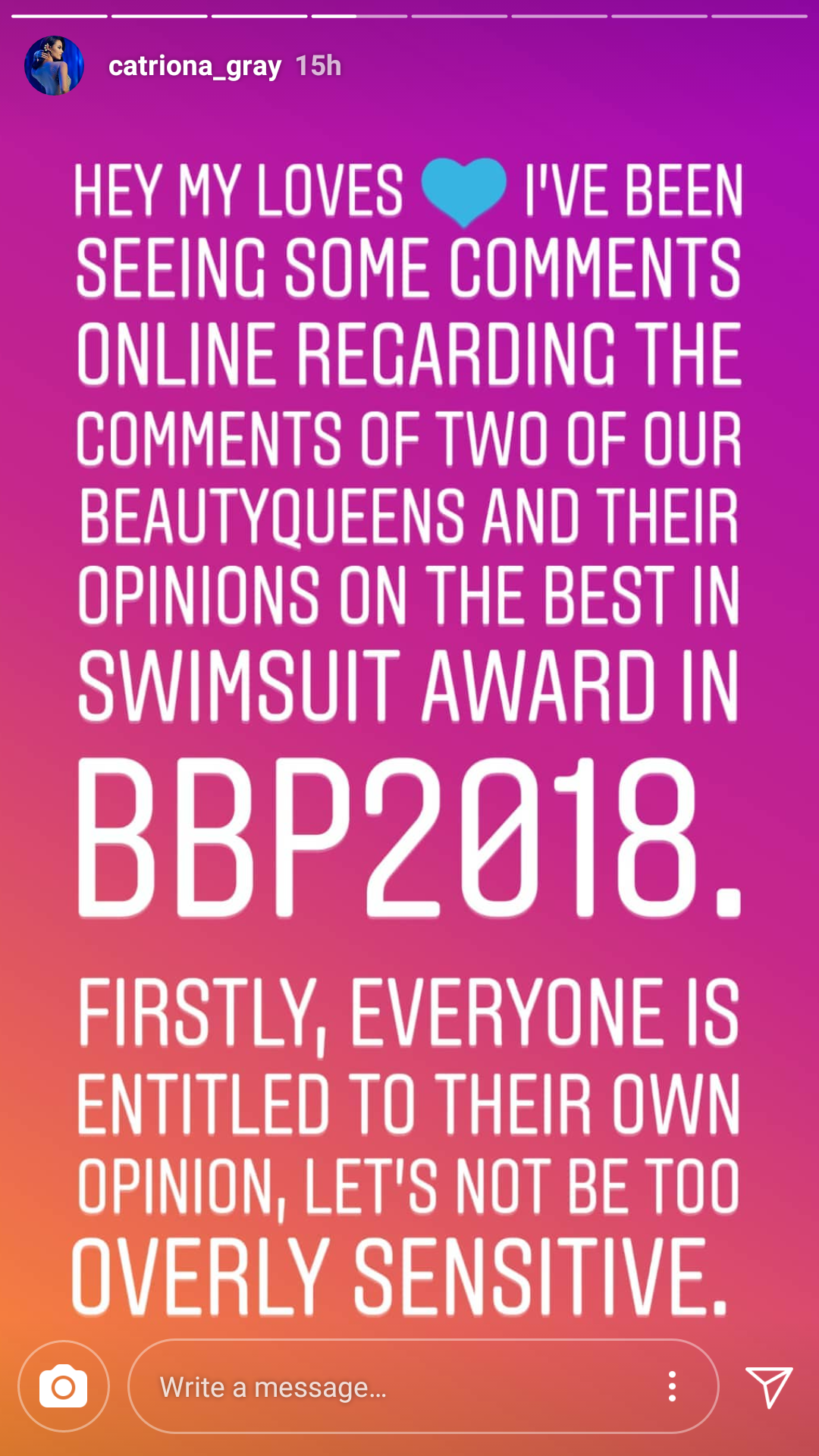 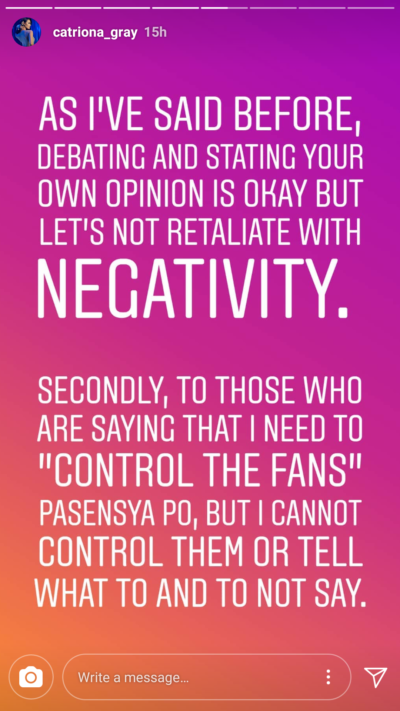 Ending her message on a light note, Gray expressed her delight on representing the Philippines in the Miss Universe pageant and asked everyone to celebrate the rest of the new queens. She added, “More love, more positivity.” 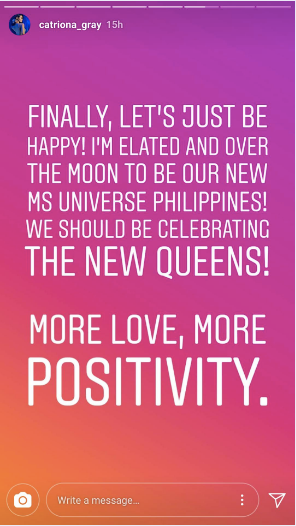 Gray was crowned as the new Bb. Pilipinas-Universe on Sunday at the pageant’s coronation night held at the Smart Araneta Coliseum. Previously she was the Philippine bet to the Miss World pageant in 2016.  /ra