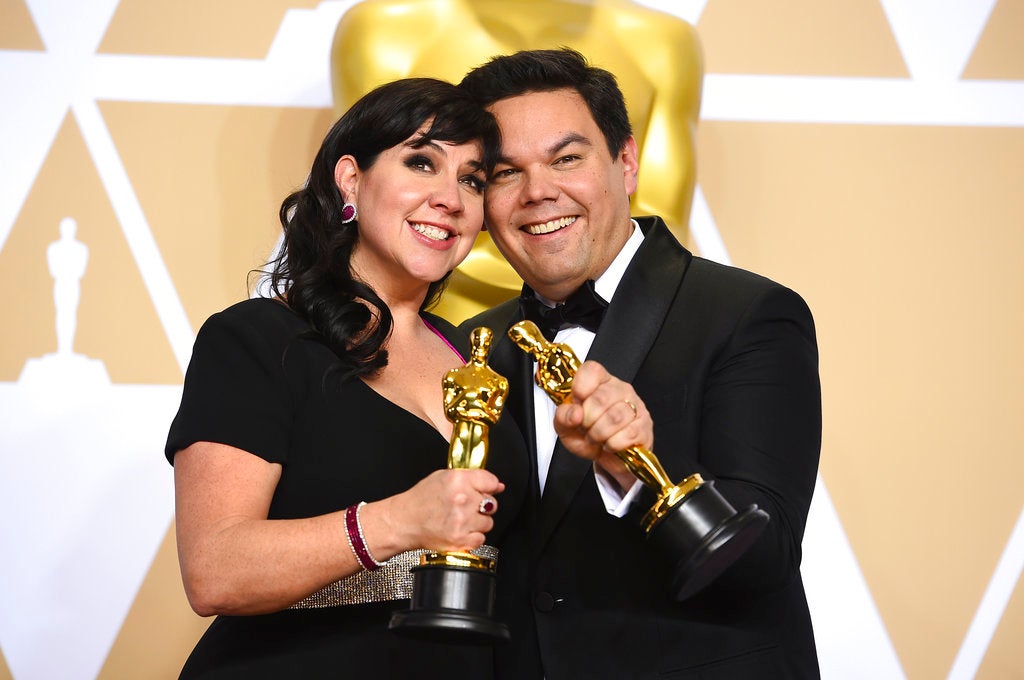 Kristen Anderson-Lopez, left, and Robert Lopez, winners of the award for best original song for “Remember Me” from “Coco”, pose in the press room at the Oscars on Sunday, March 4, 2018, at the Dolby Theatre in Los Angeles. (Photo by Jordan Strauss/Invision/AP)

The pair picked up the honor for “Remember Me” from “Coco,” four years after winning the same honor for the massive hit “Let It Go” from “Frozen.”

“Coco,” which tells the story of an aspiring young musician who accidentally enters the land of the dead, celebrates the Mexican holiday “Dia de los Muertos” (Day of the Dead).

“Mexico is not the only country that has ancestor honor celebrations,” Lopez told the Inquirer backstage.

“The Philippines celebrates the holiday, too, as does China and Japan. I think it’s something that we need a little bit more of in this country,” he added.

“It’s a really healing, wonderful ritual that we’re going to put as part of our family tradition every year,” Anderson said.

“It’s a wonderful way to feel connected with the people who came before you, not in a sad way, but more in a wonderful storytelling way,” she added.

Lopez dedicated the win to his late mother.

His wife said she was happy to see their category included a number of female nominees.

“I really want to take a minute to look at these incredibly talented songwriters tonight. Not only are we diverse, but we are close to 50-50 for gender representation. When you look at a category like ours, it helps to imagine a world where all the categories look like this one,” Anderson said.

Their song beat out Mary J. Blige’s “Mighty River” from “Mudbound”; Common and Diane Warren’s “Stand Up for Something” from “Marshall”; Benj Pasek and Justin Paul’s “This Is Me” from “The Greatest Showman”; and Sufjan Stevens’ “Mystery of Love” from “Call Me by Your Name.”

“We were gonna go for the jet ski but we’re from Brooklyn,” Anderson said onstage to laughs.

Singer and Golden Globe-winning actor Gael Garcia Bernal kicked off the performance of “Remember Me” with a soft version of the song, later followed by a festive and colorful performance featuring Grammy-winning R&B star Miguel and Natalia LaFourcade.

The highlight of the evening was rapper-actor Common and singer Andra Day, who gave a powerful performance of “Stand Up for Something,” earning a standing ovation from the audience.

Blige, the first person to be nominated for best supporting actress and best original song in the same year, was emotional and strong, backed by several singers.

Keala Settle stretched her vocals as she sang “This Is Me,” even tearing up near the song’s end.

She was backed by a diverse group of singers and dancers —some of whom went into the audience—while Viola Davis and Blige watched in awe.

Lopez belongs to Egot, the elite group of only 12 talents who achieved the rare accomplishment of winning the major awards in entertainment—Emmy, Grammy, Oscar and Tony.

He said “Remember Me” had been hugely meaningful to him and his wife.

“It’s a song written by a musician who has to leave his daughter to perform on the road. This is something we have a lot of personal experience with, and we poured our feelings into the music and lyrics,” he said. —With a report from AP

Read Next
‘Sexed-up’ J Law heats up polarizing espionage thriller
EDITORS' PICK
High inflation: Your P1 is now worth only 87 centavos
Geek out at TOYCON 2022 powered by Smart Signature
Unemployment rate up to 6% in May
UK’s Boris Johnson will resign, BBC reports
High-risk pregnancy: Reducing your risk is in your hands
House energy committee chair Arroyo bats for cheap electricity
MOST READ
Suspect in grisly killing of missing woman in Bulacan arrested
Kim Atienza’s daughter flaunts bikini body in response to critics of her ‘revealing photos’
Cop slain in Isabela ambush
FDA probes popular Filipino noodle brand for ‘high level of ethylene oxide’
Don't miss out on the latest news and information.