‘Get Out’ wins for best film, director at Spirit Awards 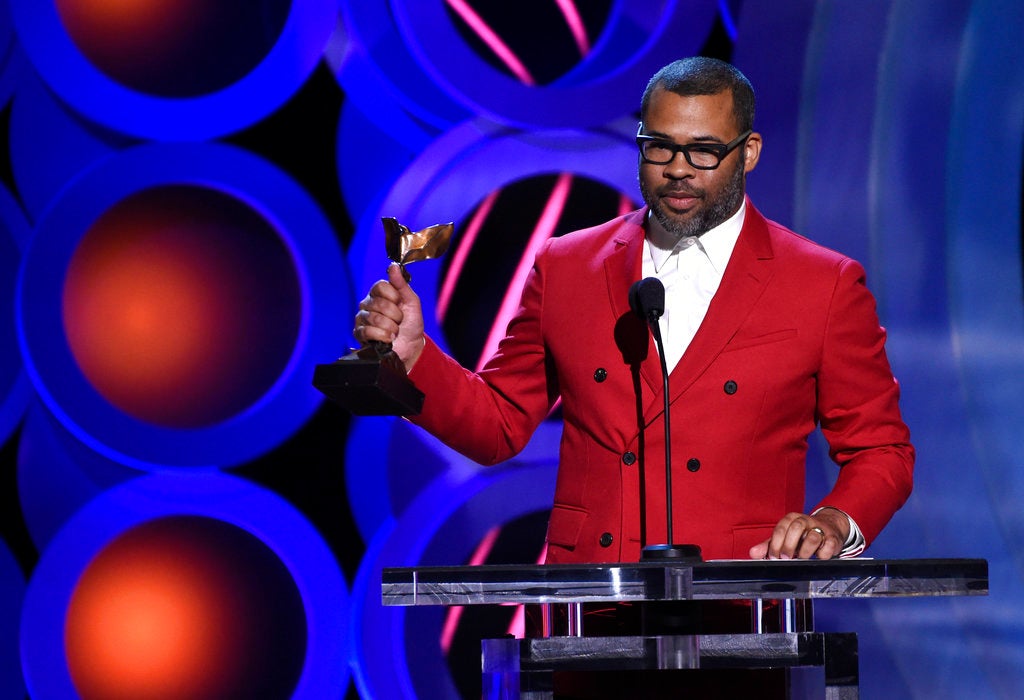 Jordan Peele accepts the award for best director for “Get Out” at the 33rd Film Independent Spirit Awards on Saturday, March 3, 2018, in Santa Monica, Calif. (Photo by Chris Pizzello/Invision/AP)

SANTA MONICA, Calif. (AP) — Jordan Peele’s “Get Out” won best film and best director on Saturday at the 33rd Independent Film Spirit Awards, a day before the horror sensation will vie for top honors at the Academy Awards.

The wins for Peele’s directorial debut gave the Spirits, a celebration of indie filmmaking, something unusual: a box-office behemoth. Made for just $4.5 million, “Get Out” grossed $255 million worldwide.

“We are in the beginning of a renaissance right now, where stories from the outsider, stories from the people in this room, the same stories that independent filmmakers have been telling for years are being honored and recognized and celebrated,” Peele said.

Peele was presented the award for best director by Spike Lee, whom Peele said paved his way. “Let’s make no mistake,” he said. “I wouldn’t be standing here if wasn’t for this man.”

“Get Out” is only the second horror film to win best picture at the Spirits. The other was 2010’s “Black Swan.”

“This project didn’t start as a statement,” said Peele. “It began as me wanting to make a film in my favorite genre. I sat down and would smoke a little weed and try to write a mind-bending horror film, my favorite genre and at some point I followed the truth and I realized there are people locked up for smoking less weed than I smoked writing the movie.”

Held in a beachside tent on a floor soaked through from rain earlier in the day, the Spirit Awards are the dressed-down, boozy prelude to Sunday’s Academy Awards.

But as the Oscars have gravitated toward honoring indie films, the two have come closer to mirroring each other. The last four Spirit winners for best film (“Moonlight,” ”Spotlight,” ”Birdman,” ”12 Years a Slave”) have won best picture at the Oscars.

The Spirits are also a party to mark the (almost) end of a long and sometimes repetitive awards season.

“I continue to be amazed that you let me get to the microphone. What are you crazy?” said Frances McDormand, who again won best actress for her performance in “Three Billboards Outside Ebbing, Missouri.” ”Do you know how hard it’s been not to swear over the last couple of months? Because this awards convention goes on for (expletive) forever.”

Allison Janney likewise continued her sweep of the best supporting actress awards for “I, Tonya.” The supporting actor Oscar favorite Sam Rockwell (“Three Billboards Outside Ebbing, Missouri”) added to his string of awards. 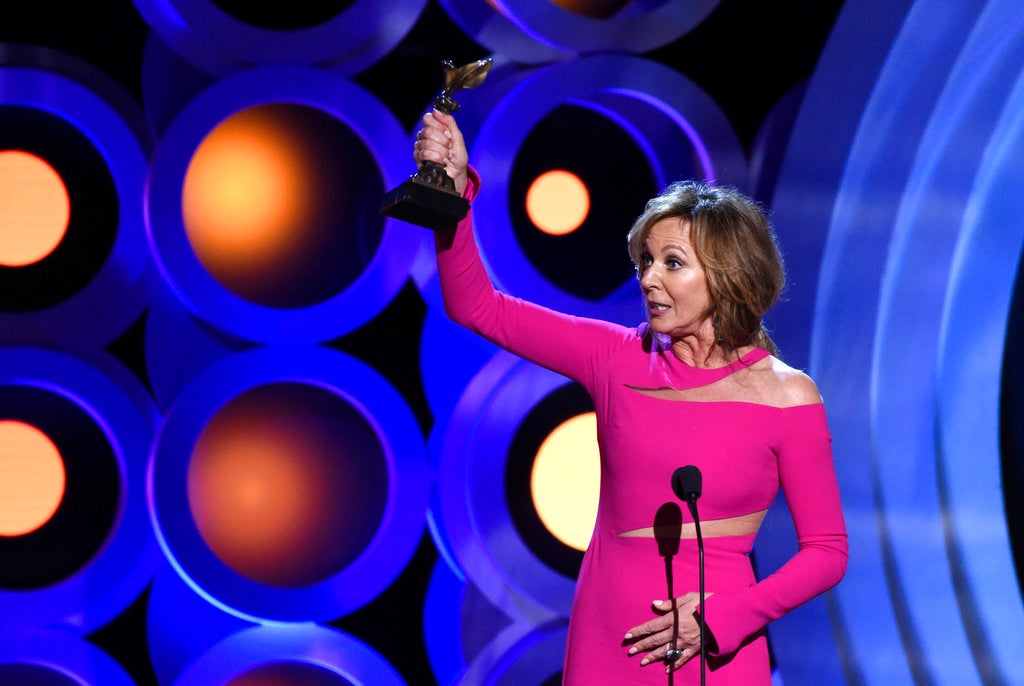 Allison Janney accepts the award for best supporting female for “I, Tonya” at the 33rd Film Independent Spirit Awards on Saturday, March 3, 2018, in Santa Monica, Calif. (Photo by Chris Pizzello/Invision/AP)

Timothee Chalamet, the “Call Me By Your Name” breakthrough star, took best actor, a category that at the Spirits didn’t include the Oscar favorite Gary Oldman. The 22-year-old said he was trying to savor the moment. 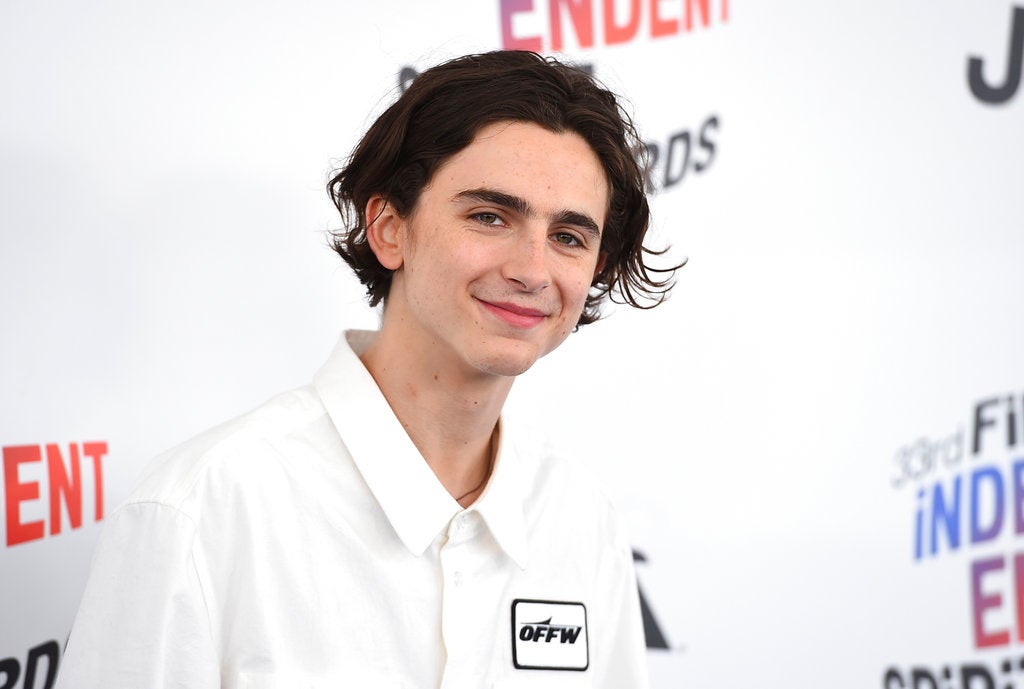 “I don’t know if this kind of thing is ever going to happen again,” said Chalamet.

Returning hosts John Mulaney and Nick Kroll opened with a lively monologue that managed to touch on everything from Donald Trump, Harvey Weinstein and Brett Ratner to the pronunciation of Saoirse Ronan’s name (“Sour Shoes Ronan,” Mulaney said) and Mulaney’s wife’s infatuation with “Call Me By Your Name’s” Timothee Chalamet. 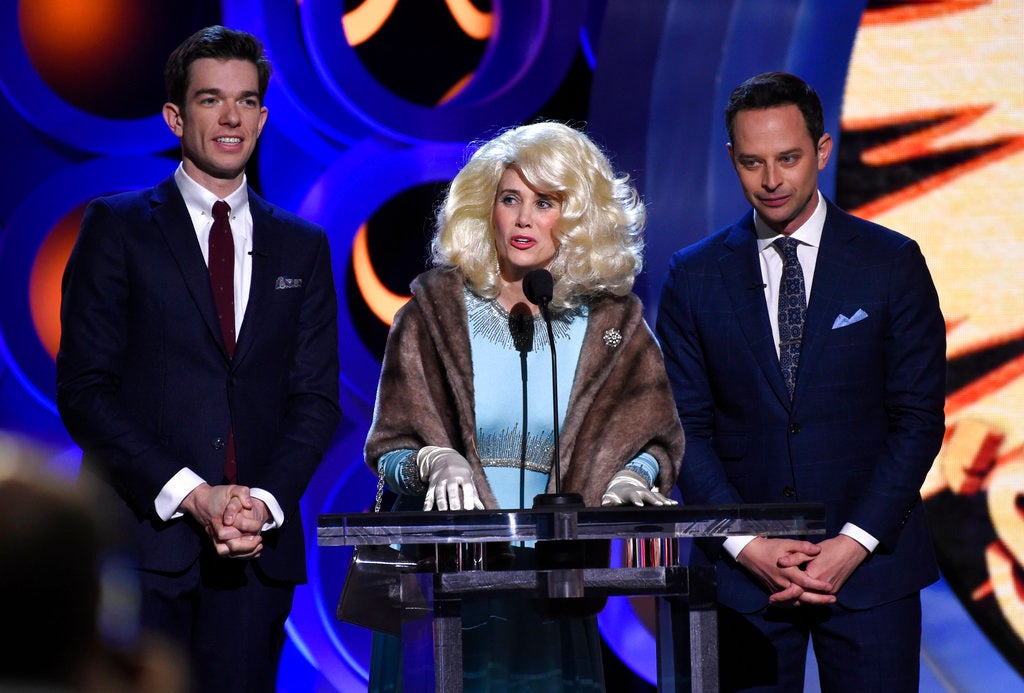 Mulaney said he once had a meeting with Weinstein where the fallen mogul proclaimed that his legacy, and what would be written on his tombstone, wouldn’t be for the films he’s done, that it’d be for “Project Runway.”

Kroll and Mulaney joked about separating the artist from the art for some of the men accused of misconduct.

“Like with Kevin Spacey: Can we still love ‘K-PAX?” Kroll pondered.

Added Mulaney: “Or Woody Allen and his last 21 unwatchable films? Can we still not watch them?”

“Thank you to my parents for watching the plays that I put on in the living room and thank you to my brother and sister for acting in them,” said Gerwig.

Dee Rees’ “Mudbound” received the Robert Altman Award, an ensemble honor given to one film’s director, casting director and cast. In an impassioned speech, Rees celebrated each element of the film, a Netflix release, and concluded by pronouncing: “‘Mudbound’ is cinema.”

Kumail Nanjiani and Emily V. Gordon won best first screenplay for “The Big Sick,” which they based on the real-life drama of the beginning of their own relationship. They are also up for the original screenplay award at the Oscars. They both thanked their parents, who provided some of the inspiration for the parents in the film, with some artistic license. 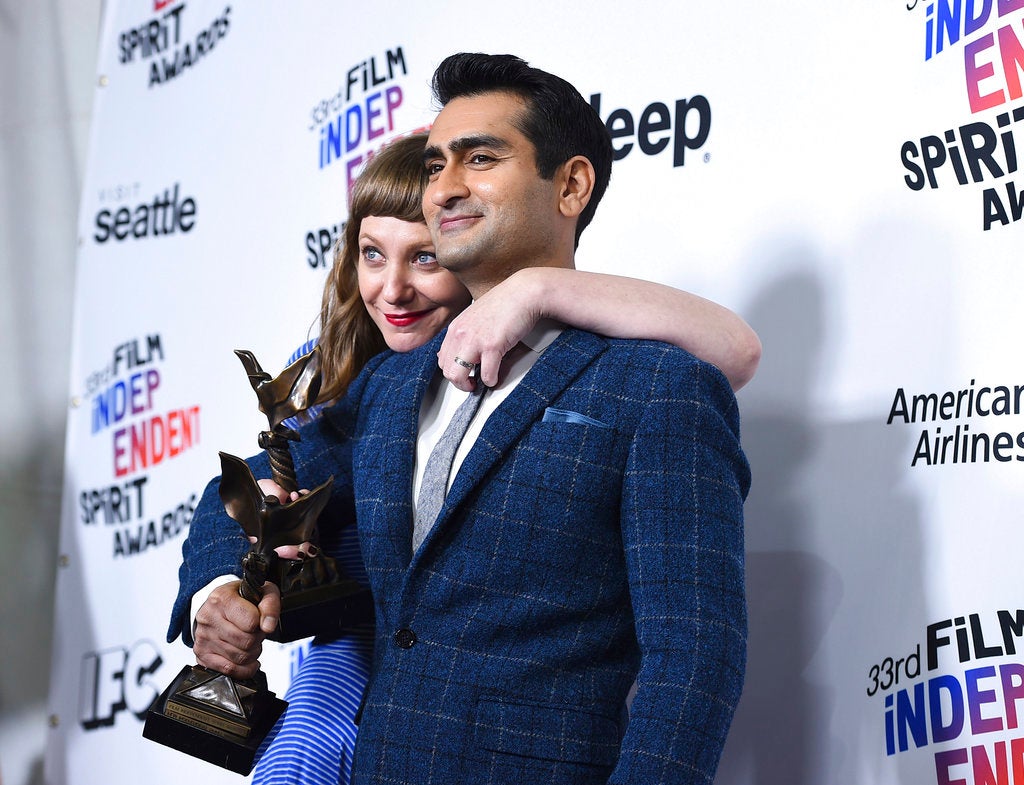 Emily V. Gordon, left, and Kumail Nanjiani pose in the press room with the award for best first screenplay for “The Big Sick” at the 33rd Film Independent Spirit Awards on Saturday, March 3, 2018, in Santa Monica, Calif. (Photo by Jordan Strauss/Invision/AP)

“My dad never cheated on my mom,” said Gordon. “That was something we made up for the movie.”

“That we know of,” quipped Nanjiani.

“I thought the film was going to encounter, to say the least division, and that hasn’t been the case,” Lelio said backstage. “What surprises me most is that the film has been understood.”

“The Rider” director Chloe Zhao was given the inaugural Bonnie Award, for a mid-career female director, which includes a $50,000 grant. Agnes Varda, the 89-year-old French filmmaking legend, won best documentary with her co-director JR for their “Faces Places,” also a nominee at Sunday’s Oscars.

Winners are chosen by Film Independent, which includes critics, filmmakers, actors, festival programmers, past winners and nominees, and members of its board. The Spirit Awards cap nominees at a budget of $20 million or less, which eliminates some bigger-budget awards contenders like “Dunkirk.”

But the film many consider the Oscar front-runner — Guillermo del Toro’s modestly budgeted “The Shape of Water,” up for a leading 13 nominations Sunday — was completely overlooked by the Spirits. NVG