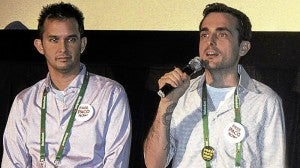 NEW YORK – We made it a point to watch “Give Up Tomorrow” in the States last April, upon the invitation of a fellow scriptwriting workshopper, Lambert Parong. The documentary won the Heineken Audience Award at this year’s Tribeca film festival. And we made sure to cast our ballot for producer Marty Syjuco’s compelling 90-minute docu, which was also awarded a Special Jury prize (for director Michael Collins).

The standout film opens with the question, “Paco, who did this to you? Who framed you?” It follows Paco Larrañaga’s trial for the murder of two teen sisters. Larrañaga insists he isn’t guilty. During the circus-like trial, he said he told the judge that he wanted to take the stand, but he objected. He added, “If I hadn’t been in handcuffs, I would have walked up to the witness stand to say I was innocent.”

The judge, who didn’t give Paco the death penalty, stressed, “There was kidnapping, but it isn’t certain whether there was also rape or homicide.” After the conviction verdict, the prosecution panel was promoted – and the controversial judge was found dead.

The viral video showing Larrañaga speaking in Spanish, pleading, “Soy inocente, por favor, ayudame (I am innocent, please help me…)” ignited a worldwide call to free him. The king of Spain even pressured the former administration to release Larrañaga.

Professor Winnie Monsod makes a valid point in the film, “All this talk about Paco going to Spain – it gives everybody the feeling that it will resolve the problem and we can all go home and sleep. It doesn’t – because it gives the false image that, once he’s in Spain, his problems are over – they’re not! He’ll still be in jail. Nobody will now have the energy or inclination to help him.  We have to focus on this boy’s innocence.”

Larrañaga is now serving his sentence in a Spanish prison. He can be on parole if he admits his guilt. In a phone interview, he shared, “When I was transferred in October last year, I was happy. I thought everything was going to turn out OK. But, I’m still inside. I’m studying, but it’s very lonely here. In the Philippines, I saw my family more often. I miss my brother so much. I keep dreaming of them. I find it ridiculous that they brought me here and expect me to admit to the crime. I never said I was guilty – because I am not.”

During a Q&A with the Tribeca audience, Paco’s sister, Mimi, shared an update: “The day after the movie premiered, Paco used up four of his eight prison calls to find out what happened. He’s thrilled and excited that his story is finally being told – and the truth is out! He told my mom, ‘This isn’t about me anymore. There are others out there, and their stories also need to be told.”