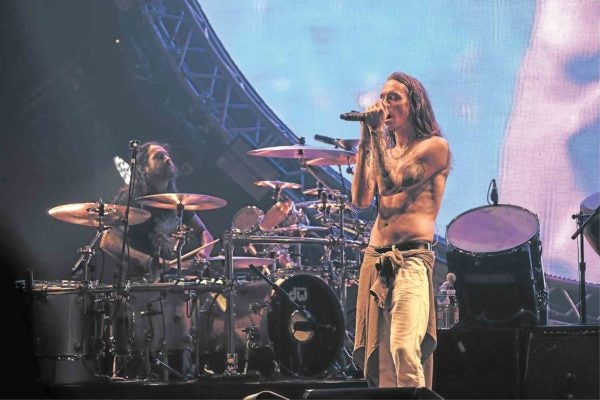 “Y’all so sweet,” Brandon, obscured by the darkness of one of those in-between song lulls, said rather sheepishly.

That seemed to be the closest thing to a spiel from the frontman, who blitzed through the 23-song set in a no-nonsense, almost utilitarian fashion, saying nothing more than a curt, “Thank you,” after every other number.

But with Brandon’s commanding presence and the band’s bulletproof catalogue of hits that readily conveys angst, love or melancholy, who has time for perfunctory banter?

Before long, he and the rest of the group were revving up for the third song of the night, the frenetic “Nimble Bastard,” that had him thumping his chest to the beat.

Over the years, Incubus—also composed of guitarist Mike Einziger, drummer Jose Pasillas, keyboardist Chris Kilmore and bassist Ben Kenney—has sophisticatedly infused such styles as funk, pop punk, metal and jazz into its melodic rock sound. And while these elements could be discerned throughout the band’s set, the music was still by and large relentlessly heavy. 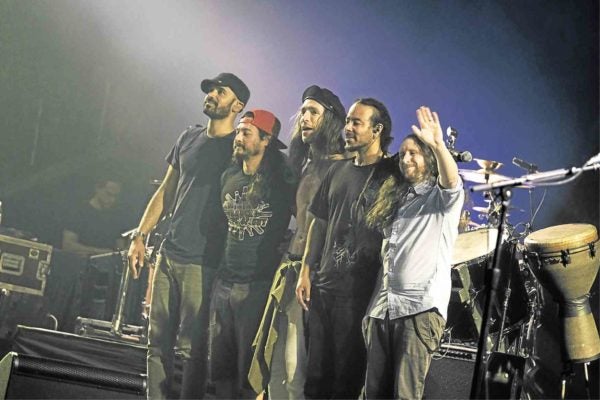 The feel-good “Paper Shoes” was laden with electronic synths, the type that brought to mind old-school science videos or documentaries.

The crashing of cymbals and hip-hop-flavored turntable scratches collided in “Pardon Me.” The group’s take on “Need You Tonight,” meanwhile, was just as funky and jaunty as the original by INXS.

As the mood changed from song to song, so did Brandon’s showmanship. There was an uncanny fluidity or lightness in his movements that meshed with the casual swagger of “Love in a Time of Surveillance.” “Glitterbomb” had Brandon banging his head, his long locks whipping every which way. In his performance of “Warning,” it was as if he was in a trance, fending off an imaginary foe onstage.

And every so often, Mike matched Brandon’s intensity by unleashing wailing and lashing guitar riffs that never failed to elicit approving roars.

Brandon wasn’t any less adept at playing to the crowd—especially the ladies.

As the concert wore on, the less clothing he wore. And by the time the sultry rock ditty “Loneliest” kicked in, Brandon slowly and teasingly slithered out of his tank top, like a snake shedding its skin. Not a few fans lost it.

While a huge chunk of the repertoire for the night was naturally devoted to songs from the group’s new album, “8,” it was the classics that inspired the loudest sing-alongs and most deafening screams.
Fans jumped and clapped their hands in cadence with the beat of “Anna Molly”; phones flew up at the slightest strains of “Megalomaniac.”

Meanwhile, two of Incubus’ biggest hits were given different arrangements: “Wish You Were Here” was slowed down and was almost ballad-like, while “Drive” was prefaced by a dreamy, meditative instrumental.

For the encore of the show—mounted by Ovation Productions—Incubus played “A Kiss to Send Off,” which Brandon punctuated with a kiss to the crowd.

Later on, he posted on Instagram: “Manila! You’re magical. Thank you so much for picking up on what we send out. We love you.”

Read Next
James and Mic raring to make a ‘special revelation’
EDITORS' PICK
EDITORIAL: To a bike-friendly future
The Best Tech Gifts For The 2022 Holidays
Pagasa: Warm, sunny Sunday in most parts of PH
House energy committee chair Arroyo bats for cheap electricity
Is it safe to talk politics again at family gatherings? ‘The Reconciliation Dinner’ shows us what that’s like
vivo’s coming to town to grant wishes with more holiday promos
MOST READ
LOOK: Vhong Navarro transferred to BJMP detention facility in Taguig
The Elephant Man in the Senate
Posh village as ‘shabu’ haven
LOOK: Zanjoe Marudo bonds with Ria Atayde, her family
Don't miss out on the latest news and information.