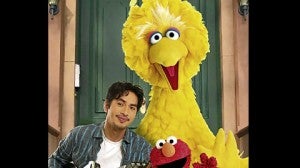 BLANCO. Goes solo in “Your Universe.”

Rico Blanco – singer/songwriter (his current hits include “Your Universe” and “Antukin”); actor (he played a werewolf in the ABS-CBN teleserye, “Imortal”), and fashion designer (his creations are marketed by Human). Now, add to that impressive list Ambassador for the “Sesame Street Kid Ako” project.

His new assignment was announced at a recent press conference, which coincided with the launch of his new album for Warner Music, the two-CD limited edition, “Your Universe.”

Rico spearheads the campaign to create awareness for the project and raise funds for a corner at public schools to encourage learning at an early age. The corner will be equipped with a DVD player and a TV set that will show entertaining episodes from “Sesame Street.”

In line with his latest assignment, he’s also working on rock versions of two classic songs from the award-winning kiddie show, “Lonely n”( a song about the lower case “n”) and “Ladybugs’ Picnic,” which deals with the number 12. Asked about his favorite “Sesame Street” character, he says he identifies with Oscar the Grouch, because that’s how he feels when he wakes up in the morning.

The singer has wrapped up work on “Imortal,” his first real acting job, though his previous music videos required acting and singing at the same time. His role as a werewolf mandated prosthetic makeup that took close to eight hours to apply – and another two hours to remove! Even harder was interpreting his role as Lucas in the early episodes, where he had to look pathetic, stupid and awkward.

Rico takes his hat off to the production crew for the long hours they devoted to the project. He admires his co-star, John Lloyd Cruz, who, he says, brings out the best in his fellow actors. He confesses that “Lloydie” was already his favorite as far back as his appearance on “Tabing Ilog.”

Rico’s latest work combines his first album, “Your Universe,” in the first disc and six new tracks in the second, including “Kahit Walang Sabihin,” the song from “Imortal,” “Bangon,” written for the victims of “Ondoy,” and “China in Me.”

I was impressed with the gothic-looking music video for the “Imortal” theme, because it didn’t rely on visual gimmickry, convoluted choreography and a cast of hundreds. Instead, the director, Richard Somes, focused on lighting, the eerie sets and the solo appearance of Rico in his Jose Rizal-inspired attire that he himself designed to capture the essence of the song.