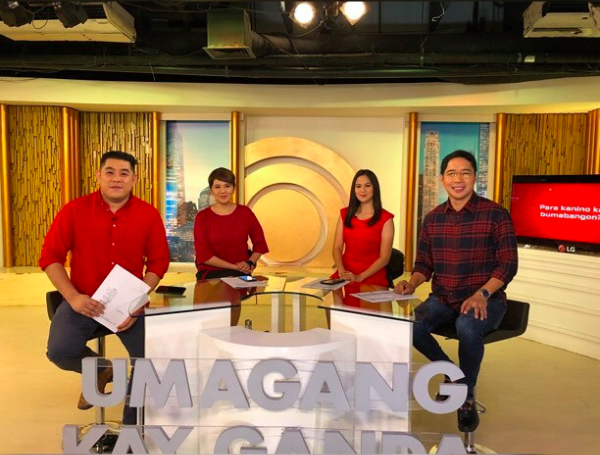 Monday morning wasn’t so beautiful and kind to “Umagang Kay Ganda” host Anthony “Tunying” Taberna. The host recently came under fire for his apparent victim-blaming of a rape victim during the morning show’s episode last Feb. 19.

Critics pointed out that Taberna’s remarks only contribute in perpetuating rape culture.

Severo called out Taberna in his tweets: “So in today’s episode of @ukgdos, Anthony Taberna decided to victim-blame a woman who was gang raped. Oh, this man. I don’t think I’m alone in thinking na hindi nakagaganda ng umaga – at ng buhay! – ang mga ganitong tao sa TV. (I don’t think I’m alone in thinking that people like this on TV do not make mornings, nor life, beautiful.)”

In the video, a news report of a 19-year-old girl was delivered; she was allegedly gang-raped after meeting up with someone she was chatting with online.

(This is just remarkable. It’s not the first time that this happened. There have been so many incidents like this of eyeball meet-ups. What’s more dangerous is you not only go to that eyeball meet-up, you even went out for a drink. That’s the problem, that’s the hardest of all, especially since you’re drinking out with an all-male group.)

We deserve better than statements that normalize the boys-will-be-boys mindset. Rape doesn’t happen because victims put themselves in vulnerable situations, rape happens because rapists rape. pic.twitter.com/sMU03j7Dbl

(Usually, women are reminded to not go, to not drink. But the blame really should be on the man. If the woman say “no,” that means “no.”)

Taberna, however, didn’t stop there. Seemingly cutting off Canoy, Taberna responded that in truth, women shouldn’t put themselves in dangerous situations.

(No. The truth is it’s easy to say that to men. Excuse me in so far as the victim is concerned, the one who must be given justice. But this should be a [warning] for future incidents. If you’re a woman, don’t enter a hole of evil-doers.)

It wasn’t long after until people started to call Taberna out for his statements. Severo himself added we deserve better than statements that normalise the boys-will-be-boys mentality. “Rape doesn’t happen because victims put themselves in vulnerable situations, rape happens because rapists rape.”

Meanwhile, netizen Ralph Orense (@WokenRalph) enumerated all the media personalities who blamed victims and were never punished for their statements.

Editor and award-winning poet Alma Anonas-Carpio, on the other hand, told Taberna his comments were unwarranted. “It was vile, it was unethical. Shame on you. In my honest and unvarnished opinion, you really shouldn’t be wearing a press tag.”

Women’s rights activist Jean Enriquez, too, called for the removal of Taberna from the morning show, saying we don’t need sexist media persons in this day and age of the #MeToo movement.

The official Twitter account of Umagang Kay Ganda (@ukgdos) immediately reached out to Severo, thanking him for his feedback. “Thank you for your feedback. Umagang Kay Ganda values comments from its viewers and we have called the attention of Anthony Taberna on the concern you have raised. Rest assured we are addressing this matter.”

Taberna has also apologized for his remarks in this morning’s episode of “Umagang Kay Ganda”. He pointed out that even before the news report last Monday, he always mentions that rapists have no place in society.

(Never will I take the side of these demons. But I am aware that there are those who did not like my comment and my reminder, misinterpreted as victim-blaming. That was not my intention. I want to say that I am not blaming the victim on what happened. The criminal should be punished by law. I express my apologies to those who were hurt by my comment. I will be more careful next time.) JB