Stars to wear black at UK film awards: Will Kate join them? 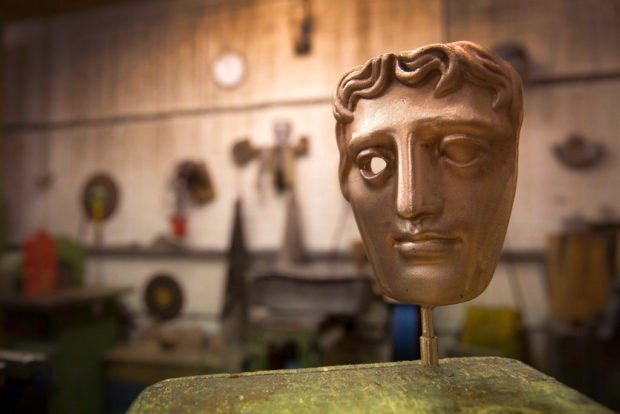 FILE – In this Tuesday, Jan. 31, 2017 file photo, a bronze alloy BAFTA mask stands in a foundry in West Drayton, London, ahead of the award ceremony in February. Designed by US sculptor Mitzi Cunliffe in 1955, New Pro Foundries has been making the bronze casts since the ceremony was created in 1976. The red carpet will be a sea of black as the movement against sexual misconduct takes center stage at the British Academy Film Awards on Sunday Feb. 18, 2018. (Photo by Joel Ryan/Invision/AP, File)

LONDON  — The red carpet will be a sea of black as the movement against sexual misconduct takes center stage at the British Academy Film Awards.

Many female stars and other guests are expected to dress in monochrome for Sunday’s ceremony as a statement of solidarity with victims of sexual harassment and abuse.

Will royalty join them? The Duchess of Cambridge is due to attend the Royal Albert Hall ceremony with husband Prince William, who is president of the British movie academy.

The royal family usually steers clear of political statements, but it could be awkward for Kate to ignore the gesture and wear bright colors. In what may be a helpful precedent, she wore a black Alexander McQueen dress to last year’s awards.

The furor over sexual misconduct forms a somber backdrop to the awards, whose front-runners include monster fantasia “The Shape of Water,” tragicomedy “Three Billboards Outside Ebbing, Missouri” and World War II flag-waver “Darkest Hour.” A win at the British awards, known as BAFTAs, is considered a key sign of likely success at Hollywood’s Oscars two weeks later.

This awards season has been dominated by allegations of sexual harassment and abuse leveled at scores of entertainment figures since women began coming forward to accuse Hollywood producer Harvey Weinstein last year. 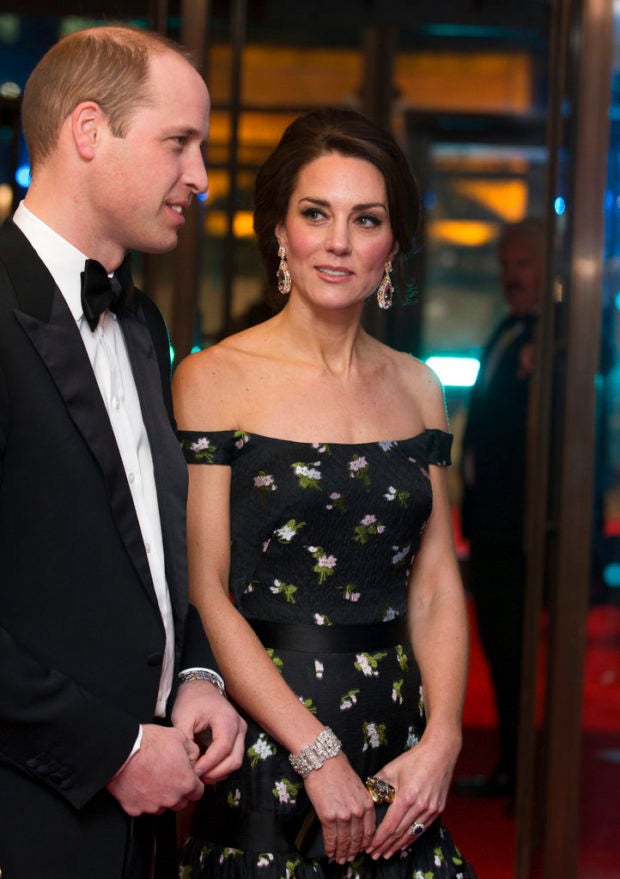 FILE – In this Sunday, Feb. 12, 2017 file photo, Britain’s Prince William and Kate, Duchess of Cambridge meet BAFTA representatives as they arrive to attend the BAFTA British Academy Film Awards at the Royal Albert Hall in London. The red carpet will be a sea of black as the movement against sexual misconduct takes center stage at the British Academy Film Awards on Sunday Feb. 18. 2018. The Duchess of Cambridge is due to attend the Royal Albert Hall ceremony with husband Prince William, who is president of the British movie academy. (Daniel Leal-Olivas/Pool via AP, File)

The issue has crossed the Atlantic, where the Old Vic Theatre has been rocked by allegations against former artistic director Kevin Spacey, and London police are investigating nine claims of sexual assault by Weinstein.

This week Britain’s movie academy, industry unions and bodies announced new measures to tackle bullying and harassment, including better procedures for reporting and investigating abuse, a commitment to act against bullies and abusers, and a confidential support line.

The call to wear black, backed by Emma Watson, Daisy Ridley, Keira Knightley, Emma Thompson and others, follows a similar campaign at the Golden Globes in Hollywood last month.

“I think the most important thing with all of this is speaking out and being seen to speak out,” said Amanda Nevill, chief executive of the British Film Institute.

She said “wearing black is another manifestation of saying ‘We don’t want the world to continue as it has been. We are committed to creating change.'”

Among the stars due to attend the London ceremony, typically a blend of gray skies and glamour, are Angelina Jolie, Jennifer Lawrence, Lupita Nyong’o, Kristin Scott Thomas and Octavia Spencer.

The awards have a new, and female, face this year, as “Absolutely Fabulous” star Joanna Lumley replaces longtime host Stephen Fry. Lumley is likely to include some pointed jibes at sexism amid her jokes.

“The Shape of Water,” Guillermo del Toro’s fantastical thriller about a mute woman and a sea monster, is nominated in 12 categories, including best picture and best director. “Three Billboards Outside Ebbing, Missouri” and “Darkest Hour” received nine nominations apiece.
All three are up for best film, alongside sun-drenched romance “Call Me By Your Name” and World War II drama “Dunkirk.”

In a strong awards season for British performers, Gary Oldman is the favorite to take the best-actor trophy for his Golden Globe-winning portrayal of wartime Prime Minister Winston Churchill in “Darkest Hour.” He’s up against fellow Brits Daniel Day-Lewis for “Phantom Thread,” Daniel Kaluuya for “Get Out” and Jamie Bell for “Film Stars Don’t Die In Liverpool,” as well as American actor Timothee Chalamet for “Call Me By Your Name.”

The best-actress race is an international contest, pitting American Frances McDormand as a bereaved mother in “Three Billboards” against Britain’s Sally Hawkins for “The Shape Of Water,” Irish actress Saoirse Ronan for “Lady Bird,” U.S. star Annette Bening for “Film Stars Don’t Die In Liverpool” and Australia’s Margot Robbie for “I, Tonya.”
Ridley Scott, whose films include “Blade Runner,” ”Alien,” ”Thelma and Louise” and “Gladiator,” is set to receive the academy’s highest honor, the BAFTA Fellowship. MKH

#MeToo not just a movement, but also evidence in discrimination claims

TAGS: #MeToo, Baftas, Call Me By Your Name, Duchess of Cambridge, Dunkirk, Harvey Weinstein, Kate Middleton, The Shape of Water