Template for other Fil-Am or Pinoy talents 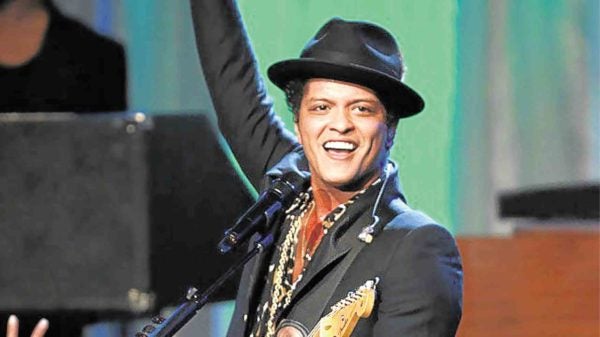 Fil-Ams and Filipinos are over the moon due to Bruno Mars’ “dominance” at the recent 2018 Grammy awards, with multiple trophies for his album, “24K Magic” and singles “24K Magic” and “That’s What I Like,” including the Album and Record of the Year honors.

The fact that Bruno is “just a pint-sized guy from Hawaii” makes his “towering” achievement over some of the biggest stars in the music biz truly inspiring for other “pint-sized” but “unli” talents—especially since quite a number of them, in the Philippines and elsewhere, look a lot like him!

Just goes to prove that, when it comes to talent, potential and actual achievement—like age, height is just a (vertical) number!

More to the aspirational point, Bruno’s Grammy and other feats offer up a template for other ambitious and determined Pinoy singers to make it big internationally.

First indicative input: note that our homeboy’s professional profile cites him, not just for his pipes and grooves, but also as a songwriter, instrumentalist, record producer and choreographer.

If you want to make it big in the biz, therefore, make it a point to offer up a varied and versatile smorgasbord of skills, to make your “package” more attractive to producers and viewers.

It also helped Bruno a lot that he was raised by a family of musicians, so he began performing at a very young age.

So, when he moved to Los Angeles after high school, he had already racked up extensive experience in performing that served him well in the brutally competitive playing fields of La-La-Land.

Less than a decade ago, his production team made incipient waves in the biz by coming up with the singles, “Nothin’ On You” by B.o.B., and “Billionaire” by Travie McCoy.

Aside from being featured on hooks in both discs, he became recognized as a solo artist—especially with his debut solo album and the singles, “Just the Way You Are” and “The Lazy Song.”

Wasting no time to follow up on those hits, his second album, “Unorthodox Jukebox” was No. 1 on the Billboard 200 chart in 2012.

Only his third studio album, “24K Magic” (2016) ended up ruling over the recent Grammys—a portrait of a young, driven talent in a great, big hurry!

Even more impressively, in less than a decade, Bruno has sold over 130 million albums worldwide, making him one of the best-selling artists of all time.

Adding to his “24-karat” stellar cachet is the fact that he’s had seven No. 1 Hot 100 singles, attaining his singular success faster than any male artist since Elvis Presley!

For his part, Bruno attributes his standout success to his Pinay mom, a dancer, and his percussionist Puerto Rican dad.

He also cites his Hawaiian roots—but, on “Saturday Night Live,” make no mistake, he forthrightly and proudly declared, “I am Filipino!”

But, he reserves his best praise for his late mother, who migrated from the Philippines to Hawaii:

“She taught me to love— she’s with me everywhere I go. Nothing matters in this world but family!” How indubitably Pinoy!

It’s to his credit that Bruno’s mom taught him the right things—no ningas cogon attitude, no crab mentality, no urong-sulong, bahala na, “colonial” claptrap—just the best Filipino traits and qualities that really count!