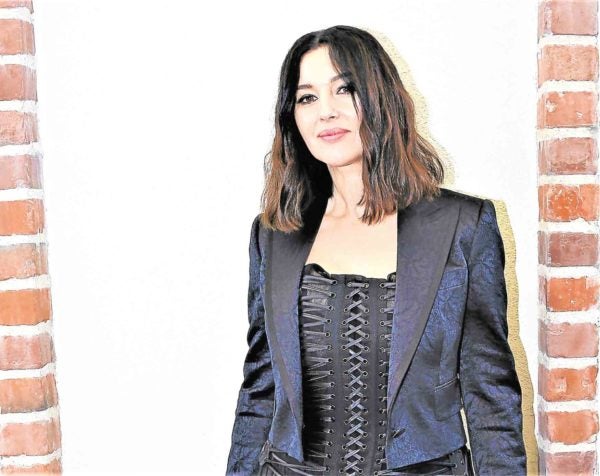 LOS ANGELES—“I would come back if Lucia Sciarra, my character, would be a very powerful Mafia boss and fight with Bond all along. So it would be great,” Monica Bellucci revealed her wish in case she makes another 007 film.

“I have to say that I really loved working with Daniel Craig. He’s a generous man, a great actor,” the stunning Italian actress said. “He’s in James Bond movies, but he also did amazing intimate films. He’s very polite. He has this masculinity and, at the same time, he’s very shy. I like that very much.”

She recalled with a smile, “I know that not long ago, Daniel said, ‘I’d like to do the next Bond movie with Monica. I think it’s a very good idea.’” When Monica, at age 51, costarred with Daniel in 2015’s “Spectre,” she was the oldest Bond girl ever. But she made her mark as the widow of a notorious assassin belonging to Spectre, a global terrorist organization.

The model-turned-actress told The Hollywood Reporter that she hoped the casting of a woman over 50 as a Bond girl was a big step for actresses: “Today, women can have great, strong, feminine roles after 50, 60, 70, even 80. So cinema is finally representing society. It means that things are changing.”

More alluring than ever at 53 years old, Monica limits her projects because she wants to have ample time with her two daughters with ex-husband, actor Vincent Cassel—Deva, 13, and Leonie, 7. “I have a love story with my daughters,” said the beaming mom, clad in an all-black ensemble in this recent interview. “I make two films a year, no more, because I like to have space between films. I said to my children, ‘What do you think, girls? Do you think I should stop working and have more time for you?’

“They told me, ‘No, we like that you keep working.’ I try to organize my life to be more a mother than an actress. But I also like my job; it’s a big passion for me. I have the chance to be with talented people, with directors like Sam Mendes, Gaspar Noé or Giuseppe Tornatore, or great actors. I’m happy to do what I do. I know there are still so many things to learn.

“It’s a beautiful example for children that you have a passion in life. What I say to my kids is, find something you like, something that you will wake up for in the morning and you’re happy to go to work for.”

Monica’s recent roles include a cameo in David Lynch’s “Twin Peaks,” as reclusive opera singer Alessandra in “Mozart in the Jungle,” and the lead female character in “On the Milky Road,” where she speaks Serbian.

The star of “Malena,” the “Matrix” film series (as Persephone) and “Irreversible” was quoted as saying, “My advice is: eat well, drink well, have good sex—and laugh a lot. The rest comes all on its own.”

My parents were very good to me. They were young when they had me. My mother was 20 when I was born. I was raised so I could talk about everything. This was important for me, to have the chance to say things, not to be scared. My parents supported me when I decided to move away. My mother told me, “I know that you never want to come back,” which was true.

So even today, I have a good relationship with my parents. I’m lucky that they’re still alive. I come from a very simple background. What I say to my kids is that what is important in life is not to have great houses or private planes. It can be very sad in the most beautiful castle. What’s important is human relations. We all need that.

You are a woman who has been loved a lot. Hated, too (laughs). But hate gives you energy, too, if you know how to deal with it.

What are your coming films? I just finished a movie with Australian directors Kiah and Tristan Roache-Turner. I was in Sydney for that film called “Nekromancer.” It’s all gore with some humor. Now, I’m going to be in a French TV series called “Dix pour cent.” It’s going to be a nice episode, very funny. Then, I’m going to work with Israeli director Eran Riklis, in a film called “Spider in the Web” with Ben Kingsley.