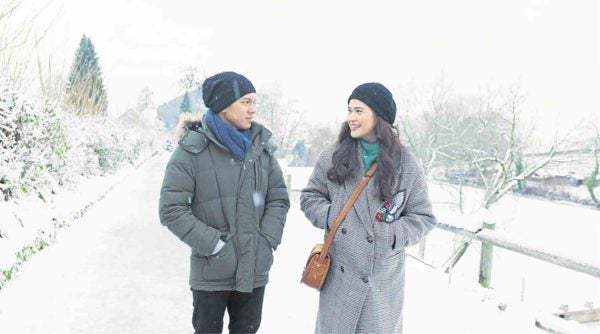 Carlo Aquino (left) and Bela Padilla in “Meet Me in St. Gallen”

Meet Me in St. Gallen,” the debut pairing of Carlo Aquino and Bela Padilla, is as notable for its lovers’ bittersweet romance as it is for the must-see, postcard-pretty backdrop that frames it.

It gets by on its actors’ fine portrayals, but its story fails to dig beneath the surface. It lacks depth and cogently developed tension required to keep viewers rooting for the star-crossed pair.

Little-boy-lost Jesse Abaya (Carlo) and rabble-rouser Celeste Francisco (Bela) are works in progress but, when they meet under fortuitous circumstances, not even the inconvenient distractions in their lives can stop them from forging a delicate but unmistakable bond.

But, Jesse and Celeste’s significant chance encounter turns into a missed opportunity when they fail to act on the undeniable “urge to merge.”

When they run into each other again four years later, the romantic sparks are stronger than ever, but Jesse’s relationship with his fiancée Diana (Angelica Panganiban) presents a confounding complication that discourages them from proceeding with caution.

Two years later, the tables are turned when Celeste and Jesse’s paths cross again in breathtaking St. Gallen in the northeastern part of Switzerland.

Will Jesse’s unexpected reappearance in Celeste’s life convince the confused heroine to part ways with her doting Caucasian boyfriend, Tobias, and pick up where they left off six years ago?

Director Irene Emma Villamor’s film has stirring dramatic moments that play well to Bela’s thespic spunk and Carlo’s searing sensitivity. The latter may not readily “conform” to mainstream cinema’s idea of how a big-screen heartthrob should look like—he’s more twinky than hunky—but his regular-Joe attractiveness and appeal make his character more accessible, “relatable” and real.

The gorgeously photographed production is occasionally weighed down by long and injudiciously supervised lulls that slow down the exposition and allow the lead characters to yammer about life’s limiting and limitless inconveniences.

But, the stakes—which are crucial in any form of storytelling—are better depicted in the way they’re persuasively limned by the enthusiastic lead actors than in the film’s narrative execution, development and progression.

“Meet Me in St. Gallen” is a film that hopeless romantics can embrace. In the complex world we inhabit, our lives are often shaped by the character-forming complications we struggle against and the hard-earned decisions we must learn to live with.

But, the conflict Jesse and Celeste address occasionally feels more frivolous than urgent—and it isn’t that easy to rally behind characters whose troubles are self-inflicted.

When you dilly-dally about the things you feel passionate about, you sometimes end up suffering the consequences of your indecisiveness.