John Mahoney, who played cranky dad on ‘Frasier,’ dies at 77 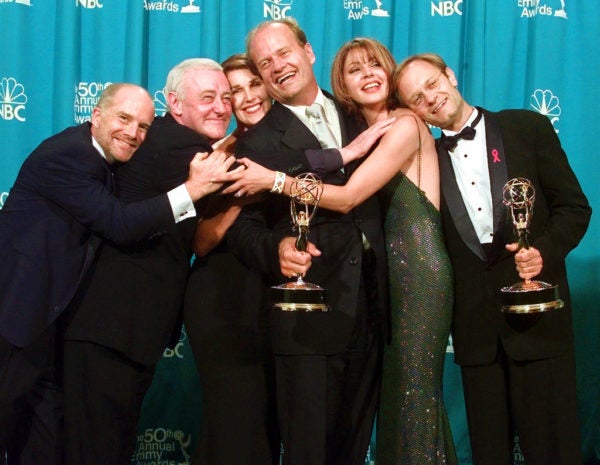 LOS ANGELES  — John Mahoney, who as the cranky, blue-collar dad in “Frasier” played counterpoint to pompous sons Frasier and Niles, has died. Mahoney was 77.

The actor died Sunday in Chicago after a brief hospitalization, Paul Martino, his manager for more than 30 years, said Monday. The cause of death was not immediately provided.

In “Frasier,” the hit “Cheers” spinoff that aired from 1993 to 2004, Mahoney played Martin Crane, a disabled ex-policeman who parked himself in a battered old armchair in Frasier’s chic Seattle living room.

Kelsey Grammer’s Frasier and David Hyde Pierce’s Niles, both psychiatrists with lofty views of their own intellect, squabbled constantly with their dad but, when needed, the family closed ranks.

Mahoney, a British native who made Chicago his home town, was a two-time Emmy nominee for “Frasier,” won a 1986 Tony Award for “The House of Blue Leaves,” and worked steadily in movies.

John Cusack, who appeared with Mahoney is the 1989 film “Say Anything,” tweeted that he was a great actor and a “lovely kind human — any time you saw him you left feeling better.”

Mahoney’s recent TV credits included a recurring role as Betty White’s love interest on “Hot in Cleveland” and a 2015 guest appearance on “Foyle’s War.” On the big screen, he was in “The American President,” ”Eight Men Out” and “Tin Men,” with 2007’s “Dan in Real Life” starring Steve Carell among his last movie credits.

The actor was born in 1940 in Blackpool, England, during World War II. That’s where his pregnant mother had been evacuated for safety from Nazi attacks, but the family soon returned to its home in Manchester.

In a 2015 interview with The Associated Press, Mahoney recounted memories of huddling in an air raid shelter and playing among bombed-out houses. The accounts his four older sisters shared with him, he said, included tucking him into a baby carriage outfitted with a shield against feared gas attacks.

One sister, who moved to the Midwest after marrying a U.S. sailor, was responsible for Mahoney’s decision to make his life in America. He visited Chicago as a college student and fell in love with it.

“The lake, the skyline, the museums, the symphony, the lyric opera,” he said in extolling the city in 2015. Add in reliably friendly Midwesterners, Mahoney said, and it’s “my favorite place in the world.”

“I give up nothing (professionally) by being in Chicago,” said Mahoney, who at the time was preparing to begin rehearsal on a Steppenwolf Theatre Company production of “The Herd.”

The theater canceled Monday’s scheduled performance in honor of Mahoney, according to an outgoing phone message that said he had been an ensemble member since 1979.

“John’s impact on this institution, on Chicago theater and the world of arts and entertainment are great and will endure,” the theater said.